One of ARM’s more unusual acquisitions in recent years has been Geomerics, a fellow UK company who specializes in video game lighting technology. Geomerics is a far cry from ARM’s day-to-day business of developing hardware blocks and ISAs to license to customers who want to put together their own chips, but Geomerics has been a long-term play for the company. By investing in a company with strong ties to the video gaming industry, ARM would in turn gain an important tool in helping to bring higher quality lighting to SoC-class GPUs, and also help to ensure that such important middleware was including SoC-class GPUs in their feature & performance targets. 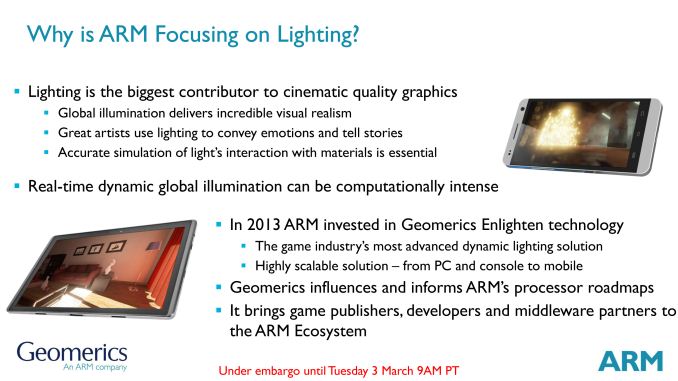 With GDC 2015 taking place this week, the ARM is seeing the first real payoff from their acquisition with the release of the latest version of Geomerics’ lighting technology, Enlighten 3. Enlighten 3 in turn is designed to be one of the most advanced global illumination systems on the market, designed to scale up from mobile to desktop PCs. Previous versions of Enlighten were already in several games and engines, including the Frostbite 2 engine backing Battlefield 3, and now with Enlighten 3 the company is hoping to extend its reach further with its inclusion into the ever popular for mobile Unity 5 engine, and as an add-on for the similarly popular Unreal Engines 3 and 4. 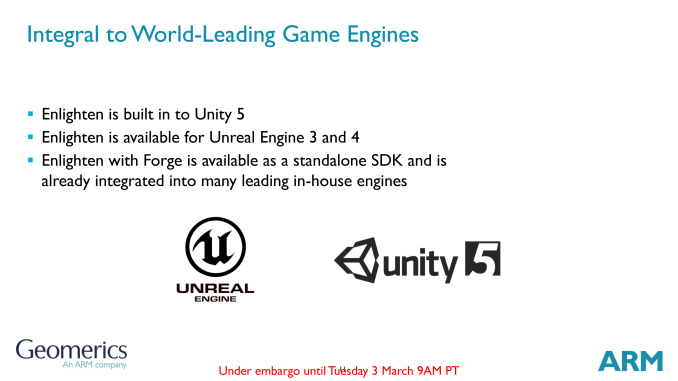 From a feature standpoint Enlighten 3 introduces several new features, including a greatly improved indirect lighting system. Also on the docket is a richer materials system, allowing for improved support for transparent surfaces, which in turn allows for the lighting to be updated to reflect when the transparency of a surface has changed. Alternatively, for scenarios without real-time lighting, the middleware also has increased the quality of lightmaps it can bake. 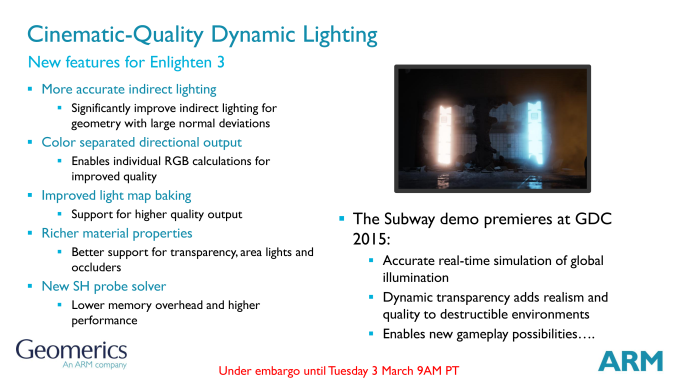 Ultimately ARM tells us that they believe 2015 will be a big year for Geomerics in the mobile space, saying they expect a number of mobile titles to use the technology. To that end, as part of their GDC launch, ARM and Geomerics are showcasing several Enlighten 3 demos, including an in-house demo they are calling Subway, and a demo showcasing Enlighten 3 running inside Unreal Engine 4.