AMD had two identical ClawHammer systems running side-by-side in their hotel suite. Now remember that these CPUs are no more than 30 days old and are the very first steppings to be released from manufacturing (A0). This demonstration of A0-stepping next-generation CPU technology has never been done in such a short amount of time by AMD. Again, we're used to seeing this type of a demo from Intel but with no such demonstration at the conference AMD stepped in to fill the void. 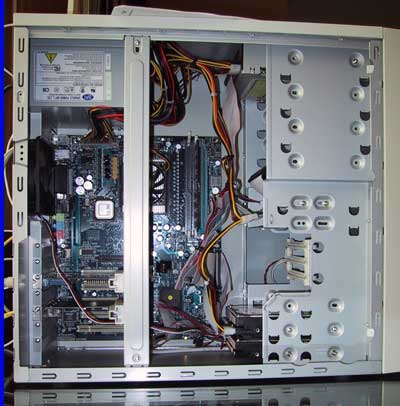 The CPU was manufactured on AMD's 0.13-micron Silicon on Insulator process out of FAB30 in Dresden. Unfortunately it was not running at full clock speed (which is something that Intel's demos usually do consist of), but we were told that the CPU was running as least as fast as the "other" 64-bit CPU out there (meaning at least the 800MHz - 1GHz of Itanium/McKinley). AMD informed us that they were still on track for a Q4-02 release at full clock speed which we've always hypothesized to be at around 2GHz. 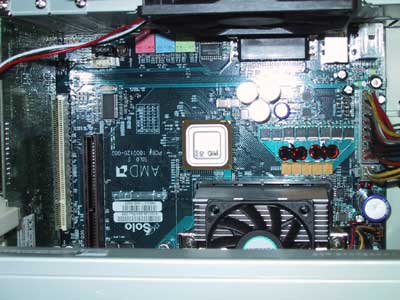 Neither test system was running with an AGP card mainly because of issues with the 8151 Hub however the hub was obviously functioning since it was connected to the 8111 I/O hub and that was working fine. The AGP issues are apparently working in lab but the systems they setup weren't able to run with AGP support. 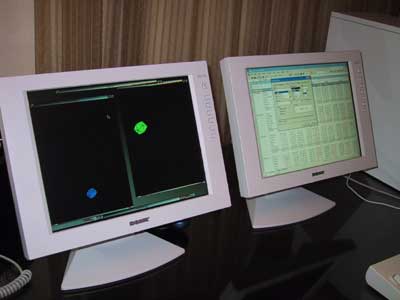 The first system was a ClawHammer running 32-bit Windows XP, straight from the box with no modifications. For those of you wondering what OS you'll need to have in order to run the Hammer processors, your current 32-bit OS will work just fine. Granted that with a 32-bit OS you don't get any of the benefits of the x86-64 architecture, one of which happens to be the additional registers made available in x86-64 mode, but it will work. The Windows XP ClawHammer system was running Microsoft Word and Microsoft Excel test scripts nonstop without a hitch. 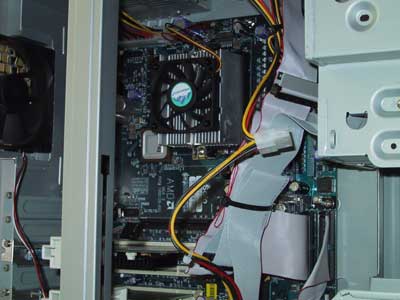 The next system was an identical ClawHammer system running a 64-bit Linux port. This setup was a bit more interesting; the demo consisted of two windows each with a a ball bouncing inside the window. The window on the left was running a 32-bit version of the ball-bouncing demo, while the window on the right was running an x86-64 compiled version of the same demo at the same time. This was a simple demo used to show that working with 32-bit and 64-bit recompiled applications concurrently was possible on such early hardware and it worked just fine. This system had apparently been up for the past 24 hours without a single crash, granted it was only bouncing balls all day but that's still an accomplishment for 30-day old silicon.

With that said, what we'd really like to see from AMD is more in the way of compiler support for x86-64. While there are currently tools available, what's necessary is a version of Visual Studio with support for x86-64 so that the majority of application developers simply have to use a switch in order to produce x86-64 binaries in their current development environment. The end result for producing x86-64 binaries is that the applications now gain use of the additional x86-64 registers thus improving performance from having to go to memory to fetch data much less. We've heard from developers stating that the performance improvement, especially when dealing with today's object oriented code, could be anywhere as high as 10 - 20% from a simple recompile. Maybe it's time for AMD to produce their own compilers to plug into Visual Studio much like Intel does with their C++ and FORTRAN compilers.

This has been, without a doubt, the most exciting thing at IDF thus far and we just thought you'd get as much of a kick out of it as we did. For now, it's a bit of rest before it's back to the show for another day of cool technology and interesting announcements - stay tuned.