Today's launch of 980M and 970M is about as much of a "hard launch" as we see with notebook GPUs. Quite a few notebooks should be available for order with the new chips, though it could take a couple weeks or more for orders to process. We were hoping to have the MSI GT72 prior to today's launch, but as noted earlier it should arrive in the next day (or in a few hours even). We'll post a follow-up Pipeline article as soon as we're able showing performance using some of our standard gaming and graphics benchmarks. In the meantime, here's the current list of notebooks that support the new GPUs. 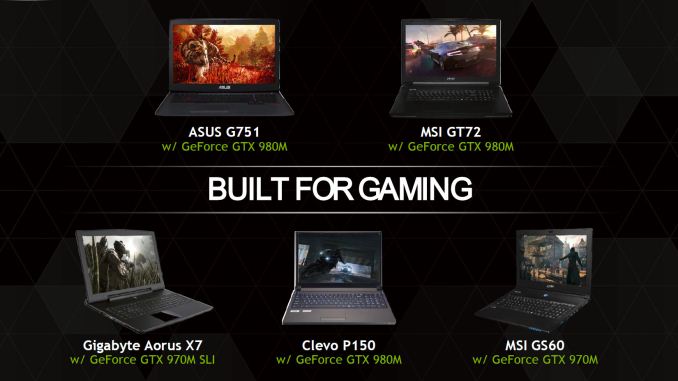 For their part, NVIDIA has provided performance numbers for both GPUs at different settings in a variety of games, but there's no comparison with other GPUs so the numbers are out of context. As a preview of what to expect, and considering several of the games use the built-in benchmark tools, here's what NVIDIA is reporting; all of the following games were tested at 1080p with the settings indicated:

Most of the games are apparently being run at near maximum quality settings (though Batman is missing 4xMSAA, it does have PhysX enabled), which is good for putting as much of the bottleneck on the GPU as possible. StarCraft II and Hitman Absolution appear to be CPU limited, which isn't too surprising for StarCraft II as it has always been heavily influenced by CPU performance. On average, the GTX 980M outperforms the GTX 970M by 28%, even including the CPU limited games; if we ignore StarCraft II and Hitman Absolution the 980M is 34% faster on average.

Update: our own performance preview of GTX 980M is now available. The short summary is that GTX 980M is about the same performance level as the desktop GTX 770, though obviously with some newer features like DX12 support and VXGI. It's also twice as fast as the GTX 860M and 35% faster than GTX 880M on average. 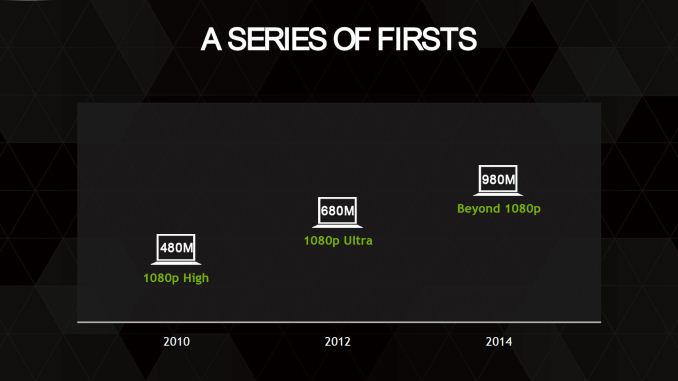 One of the problems we're starting to run into with mobile GPUs getting so fast is that many laptops still top out at a 1920x1080 display, and even at maximum detail there are plenty of games that will easily break 60 FPS and may start running into CPU bottlenecks. For that reason, NVIDIA is billing the GTX 980M as a mobile GPU that targets playable frame rates at resolutions beyond 1080p, and we'll likely see more high-end notebooks ship with 2560x1440, 3K, or even 4K displays. It's probably a bit too much to assume that 3K gaming at 60 FPS will happen on most titles at maximum quality with the 980M, as games like Metro: Last Light and Crysis 3 can be very taxing, but we're definitely getting close to being able to max out settings on most games.

NVIDIA didn't provide specific numbers for their previous generation mobile GPUs, but they do note that GTX 980M should be around 40% faster than the GTX 880M, which is no mean feat. Compared to the first generation Kepler GPU, GTX 680M, the difference is even larger: 980M is roughly twice as fast as the GTX 680M that launched three years ago. GTX 970M is also supposed to be about 40% faster than the previous generation GTX 870M and on average twice as fast as the GTX 860M.

Wrapping up, we've provided a full gallery of slides from the NVIDIA presentation for those that are interested. We're very much looking forward to some hands on time testing out the GTX 980M, as it should prove to be quite a formidable GPU. That's not too surprising as GM204 proved to be quite potent on desktop GPUs, with a smaller and more efficient chip able to basically match and generally exceed the performance of l the larger and more power hungry GTX 780 Ti. The result is that this is as close as notebooks have come to matching desktop performance (for a single GPU) in as long as I've been reviewing notebooks.

Looking forward, performance is always improving and we'll certainly see even faster GPUs in the next year. We also know that NVIDIA is capable of making larger GPUs, so we're still missing the true "Big Maxwell" (i.e. GM200 or GM210). As with the GF110 and GK110 I don't expect we'll ever see that chip in consumer notebooks, but we might see GM204 return with even more SMMs enabled. But until NVIDIA comes out with an even bigger and faster Maxwell variant, this is the top mobile GPU, and that means it will priced as such.

We should see GTX 980M in gaming notebooks starting around the $2000 price point (give or take), with GTX 970M launching in notebooks starting at $1600. Based on MSI's pricing of their GT72, it also looks like the GTX 980M may have as much as a $350 price premium over the GTX 970M, or at least that's the difference in pricing for end users. (Ouch.) We're covering the notebooks that have been announced in separate Pipeline articles, and we should see some of them at the usual places like Newegg and Amazon. Stay tuned for our performance results from the MSI GT72, which will go up as soon as we get the laptop and can run some tests.