One of the big draws of the larger form factor is battery life. Due to fundamental scaling issues, a bigger phone should be able to achieve greater battery life than a small one. This is because a smartphone's PCB generally remains constant in size, so it becomes an increasingly smaller proportion of the overall device size. This leaves increasingly large areas where batteries fill in the gap. In order to quantify just how big of a difference this makes when going from 4.7" to 5.5", we turn to our standardized battery life test suite. For those unfamiliar with our testing, the display is calibrated to 200 nits and all background tasks are disabled in order to ensure that only the foreground task is active in our tests. 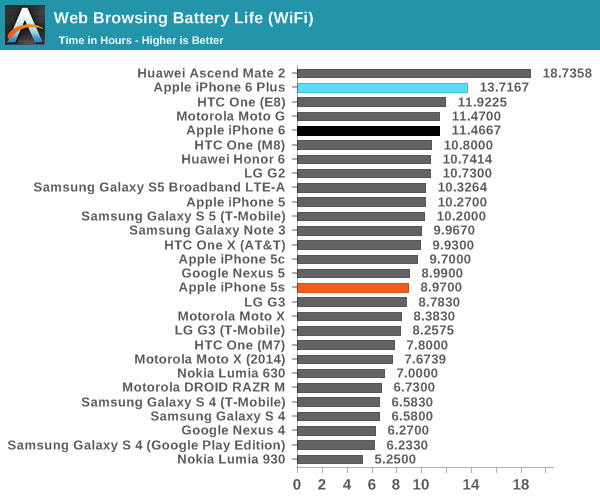 As we previously discussed, the iPhone 6 Plus performs quite admirably in the WiFi web browsing test. As expected, there's a healthy bump over the iPhone 6, but it's not quite a massive leap as a larger battery size might suggest. 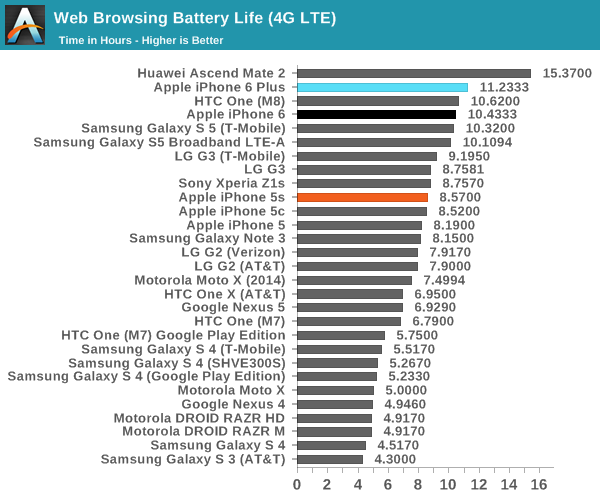 Once again, we see a similar pattern with the LTE web browsing test. Since both phones are based on the same platform, it makes sense that their results track quite closely together as we're only scaling display and battery size within the context of these tests.

However, the web browsing test is a mostly display-bound test, even if there is an SoC efficiency aspect that can make a significant difference. In order to better test SoC efficiency and get an idea of the dynamic range that a phone has in battery life, we turn to our compute-bound tests. Unfortunately, Basemark OS II stops the test too early due to low battery notifications in iOS, so we cannot use that test for a proper comparison to other phones. 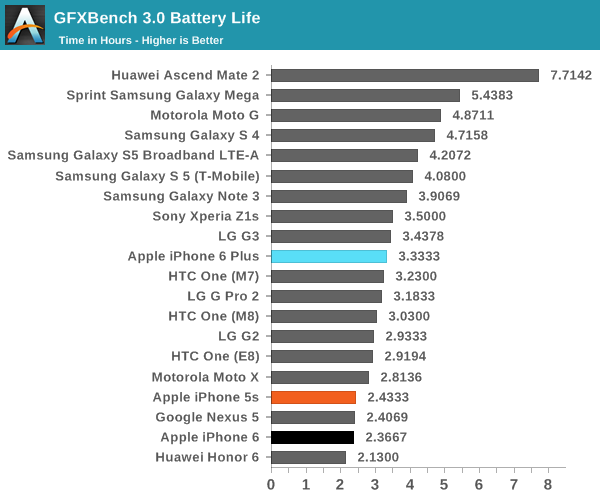 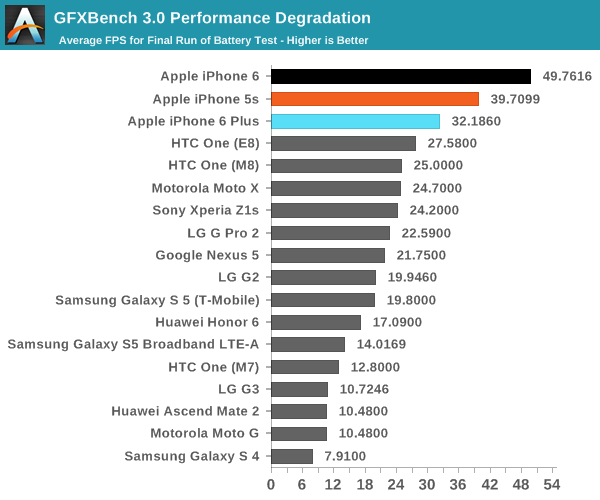 Overall, battery life on the iPhone 6 Plus ranges between about 20% higher to 40% higher depending on the balance of display power and SoC/baseband power in any given situation. Heavily display-bound situations will be closer to the 20% higher figure while more SoC-bound tasks will tend toward 40% or even higher. Purely idle situations should see even greater improvements as any situation where the display is off will see linear scaling with battery size.

Charge time is one of the key metrics for getting a holistic picture of battery life, as it's impossible to really understand whether a phone will be able to stay mobile as needed without considering recharging. In some cases such as a trade show or travel, it doesn't matter if a phone lasts 20% longer than the competition if it loses all the time gained in time spent on a charger. In order to test this, power is tracked from when the phone is connected to the charger to when it reaches the lowest power draw state on the AC adapter. 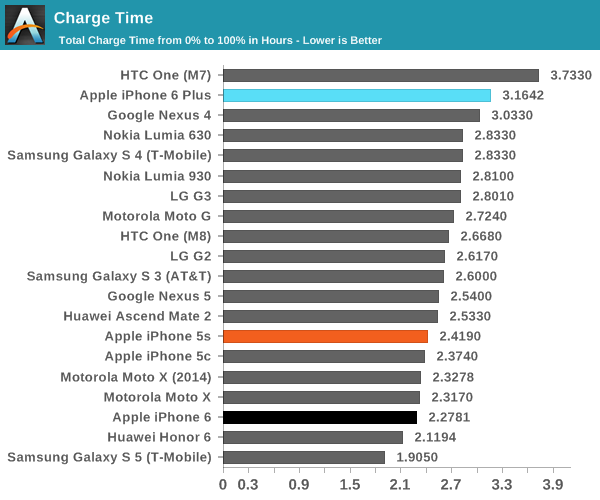 Unfortunately, the included charger is the same 5W charger that we've seen for years now. As a result, the iPhone 6 Plus is constrained by the relatively low maximum power that it can put out. Those that wish for faster charging should look into getting an iPad A/C adapter as the iPhone 6 Plus will charge faster when connected to it.