A true PC – The X-Hard Drive

The decision to include a hard drive with the Xbox was a very good decision on Microsoft's part, as consoles (especially CD/DVD based systems) are in dire need of a faster mass-storage medium.  The role of the hard drive in the Xbox isn't to receive game installations, rather it is used to store save games, user profiles, and act as a cache for the DVD drive to store frequently used data that must be available quicker than the DVD drive can deliver it.

Microsoft elected Seagate and Western Digital to provide drives for the Xbox so if you open a unit up you're likely to find either a Seagate U Series 5 or a Western Digital Protégé WD80EB drive.  Both are very slow (by PC standards) 5400 RPM drives that are also extremely quiet.  Both drives are single platter designs meaning that they inherently run quieter and cooler than multiplatter drives.

In the case of the U Series 5 drive there is a single 20GB platter in the drive of which only one side is used.  The remaining platter side is not tested for defects so it could very well be fully functional or completely worthless; in either case the size of the Seagate U Series 5 drive is 10GB which was Microsoft's original spec for the Xbox.  Whether all of that 10GB is usable is another question, but that's how large the drive is.  In theory it would not cost any more for Seagate to supply Microsoft with drives that have both sides of the platter enabled thus making it a 20GB drive.

The Western Digital WD80EB drive isn't one that is publicly available, unlike the U Series 5.  The closest drive WD manufactures for the mass public is the WD84EB which is very similar in specifications to the WD80EB.  This is indeed an 8GB drive and is again composed of only a single platter. 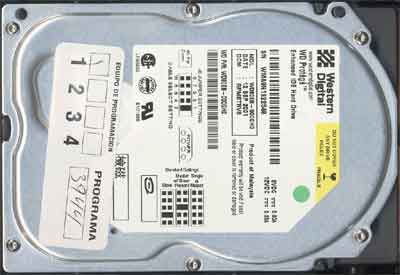 In terms of specifications, as we mentioned earlier both drives are extremely slow which was a necessary sacrifice in order to get the cool and quiet operation.  In terms of performance, the U Series 5 does have faster overall specs especially in terms of seek performance.  Since the Xbox will primarily be writing small amounts of data, sustained transfer rate should not matter.  The average seek time (the time it takes to get from one track to another random track) of the Seagate drive is 8.9ms while on the WD drive it is 12.1ms.  We would be surprised if the 35% increase in seek time was not noticeable unfortunately our unit was equipped with the WD drive.  While both drives do have a 2MB buffer, the Seagate drive does have a faster platter-to-buffer transfer rate; in this case the Seagate drive is around 18% faster but in real world scenarios we'd be very surprised if the performance difference was any more than 1 – 2%.