Now that we’ve had a chance to take a look at the architectural and feature additions found in Maxwell 2 and GM204, let’s talk about the products themselves.

Today NVIDIA will be launching 2 products. These are the GeForce GTX 980 and GeForce GTX 970. As with past 80/70 parts this is a two tier launch, with GTX 980 being NVIDIA’s new flagship card and 1st tier GM204 card, while GTX 970 offers 2nd tier performance at much lower pricing.

For clockspeeds NVIDIA is shipping GTX 980 with a base clockspeed of 1126MHz, a boost clockspeed of 1216MHz, and in our samples we have found the maximum clockspeed (highest stock boost bin) to be 1252MHz. This is a higher set of clockspeeds than any NVIDIA consumer GPU thus far, surpassing GTX 770, GTX Titan Black, and GTX 750 Ti. Curiously NVIDIA’s self-defined (and otherwise arbitrary) boost clock is much higher than on past parts; normally it would only be 50MHz or so above the base clock. This indicates that NVIDIA is getting more aggressive with their boost clock labeling and are picking values much closer to the card’s maximum clockspeed. This is a subject we will be revisiting later.

Meanwhile the memory clock stands at 7GHz, the same as with NVIDIA’s past generation of high-end cards. With GDDR5 clockspeeds all but tapped out, NVIDIA appears to have reached the limits of GDDR5 as a technology, hence their long-term interest in HBM for future architectures and improved color compression for current architectures. In any case this 7GHz of GDDR5 is attached to a 256-bit memory bus, and is populated with 4GB of VRAM. NVIDIA for the longest time has held to 2GB/3GB of memory for their cards, so it is a welcome sight to see that they are now making 4GB their standard, especially if they are going to target 4K gaming. 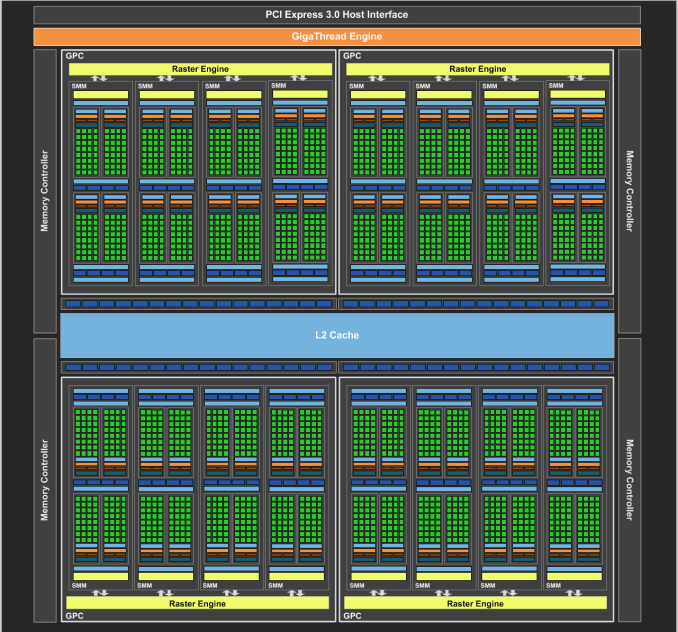 For power delivery GTX 980 has a rated TDP of 165W. This is significantly lower than the 250W TDPs of the GTX 780/780Ti/Titan and even the 225W TDP of the GTX 770, and heavily contributes to NVIDIA’s overall power efficiency advantage. Meanwhile NVIDIA does not specify an idle TDP, however in our testing idle power usage is lower than ever for a high-end NVIDIA card, indicating that NVIDIA should have it down to the single watt range.

Moving on, we have the GTX 980’s lower price, lower performance counterpart, the GTX 970. Compared to GTX 980, GTX 970 drops 3 of the SMMs, reducing its final count to 13 SMMs or 1664 CUDA cores. It also sheds part of a ROP/L2 cache partition while retaining the 256-bit memory bus of its bigger sibling, bringing the ROP count down to 56 ROPs and the L2 cache down to 1.75MB, a configuration option new to Maxwell.

As expected, along with the reduction in SMMs clockspeed is also reduced slightly for GTX 970. It ships at a base clockspeed of 1050MHz, with a boost clockspeed of 1178MHz. This puts the theoretical performance difference between it and the GTX 980 at about 85% of the ROP performance or about 79% of the shading/texturing/geometry performance. Given that the GTX 970 is unlikely to be ROP bound with so many ROPs, the real world performance difference should much more closely track the 79% value, meaning there is a significant performance delta between the GTX 980 and GTX 970. Elsewhere the memory configuration is unchanged from GTX 980. This means we’re looking at 4GB of GDDR5 clocked at 7GHz, all on a 256-bit bus.

GTX 970’s TDP meanwhile is lower than GTX 980’s thanks to the reduced clockspeeds and SMM count. The stock GTX 970 will be shipping with a TDP of just 145W, some 80W less than GTX 770. NVIDIA’s official designs still include 2 6-pin PCIe power sockets despite the fact that the card should technically be able to operate on just one; it is not clear at this time whether this is for overclocking purposes (150W would leave almost no power headroom) or for safety purposes since NVIDIA would be so close to going over PCIe specifications.

Due to the launch of the GTX 980 and GTX 970, NVIDIA’s product lineup will be changing to accommodate these cards. GTX 780 Ti, GTX 780, and GTX 770 are all being discontinued; their replacements offer better performance at better prices for lower power consumption. GTX 980 will be launching at $550, meanwhile GTX 970 will be launching at the surprisingly low price of $329, some 40% cheaper than GTX 980. On a historical basis GTX 980 is a bit higher than most of the past GTX x80 cards – which are often launched at $500 – while GTX 970 immediately slots in to GTX 770’s old price.

NVIDIA’s target market for the GTX 900 series will be owners of GTX 600/500/400 series cards and their AMD equivalents. GTX 980 and GTX 970 are faster than their 700 series predecessors but not immensely so, and as a result NVIDIA does not expect 700 series owners to want to upgrade so soon. Meanwhile 600 series owners and beyond are looking at 70%+ improved performance for cards at the same tier, along with some degree of a reduction in power consumption.

For today’s launch NVIDIA will be doing a reference launch of the GTX 980, so reference cards will be well represented while production of customized cards ramps up. Meanwhile GTX 970 is a pure virtual launch, meaning there will not be any reference cards at all. NVIDIA’s partners will be launching with customized designs right away, many of which will be carried over from their GTX 600/700 card designs. This will be a hard launch and cards should be readily available, and while NVIDIA should have no problem producing GM204 GPUs on the very mature TSMC 28nm process, it is difficult to predict just how well supplies will hold out. 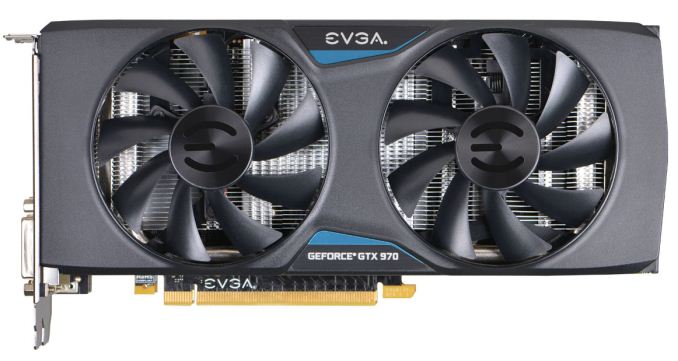 On the competitive basis NVIDIA’s direct competition for the GTX 980 and GTX 970 will be split. GTX 980 is an immediate challenger for the Radeon R9 290X, AMD’s flagship single-GPU card which outside of a couple of sales continues to be priced around $499. GTX 970’s competition meanwhile will be split between the Radeon R9 290 and Radeon R9 280X. From a performance perspective the R9 290 is going to be the closer competitor, though it's priced around $399. Meanwhile the R9 280X will undercut the GTX 970 at around $279, but with much weaker performance.

NVIDIA for their part will not be running any promotions or bundles for the GTX 900 series, so what you see is what you get. Otherwise AMD will have their continuing Never Settle Forever bundle in play, which offers up to 3 free games in order to add value to the overall product.

Finally, there will be price cuts for the GTX 700 series. Officially GTX 760 stays in production with a new MSRP of $219. Meanwhile GTX 770, GTX 780, and GTX 780 Ti will go on clearance sale at whatever prices retailers can manage, and are still part of NVIDIA’s Borderlands bundle offer. That said, from a performance and power efficiency angle, the GTX 900 series is going to be a much more desirable product line.