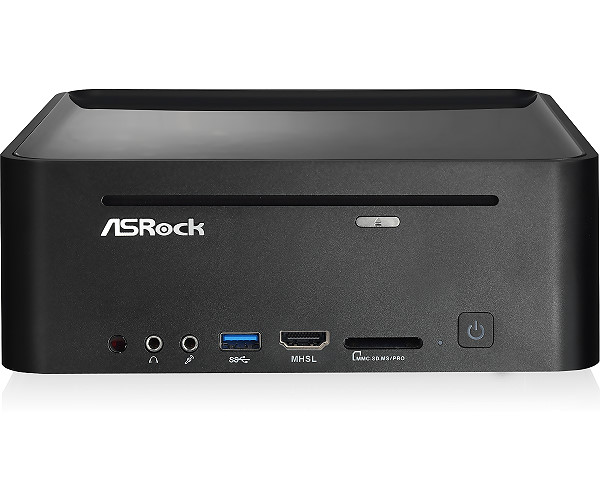 ASRock has been one of the few motherboard vendors to focus on mini-PCs targeting the HTPC and portable gaming markets. Starting from the ION-based nettop days, they have consistently refreshed the mini-PC lineup in sync with Intel's product cycle. We have been reviewing members of their CoreHT lineup (rechristened as VisionHT last year) since the Arrandale days, but today, we are focusing on their mini PC targeting gamers. The VisionX lineup marked the departure from NVIDIA to AMD for the discrete GPU component, and their Haswell version, the VisionX 420D combines a Core i5-4200M with an AMD Radeon R9 M270X.

ASRock's VisionX 420D, like the previous generation mini-PCs from the company, comes barebones (no OS). It provides some flexibility to the end user in terms of upgradability (better RAM, SATA drives, addition of a mSATA drive etc.). The marked departure from the older versions is the absence of a SKU with Blu-ray ODD. The only VisionX Haswell model comes with a DVD rewriter. The configuration of our review unit is provided below.

In addition to the main unit, the package includes a MCE remote (the same model that we have been seeing from ASRock for the last four years), a 120 W (19V @ 6.32A) adapter and screws / SATA data and power cables for the installation of an additional 2.5" drive. We also have a DVI-to-VGA adapter, driver and software CDs as well as a MHL cable.

Talking of the MHL cable brings us to one of the unique aspects of the VisionX 420D. The front face of the unit has a 'HDMI-In' port which allows for the connection of a smartphone supporting MHL specifications to it. The MHL functionality is fulfilled by the Silicon Image Sil 1292 MHL/HDMI-to-HDMI bridge. The gallery below takes us around the hardware in the unit.

Gallery: ASRock VisionX 420D - In & Around the Hardware

Compared to the previous models, we find that ASRock has added an additional fan in front of the 2.5" drive. This fan could be of use in cases where the user decides to add another 2.5" drive. Even if that is not the case, anything that can keep the internal components at a lower temperature is always welcome. In our usage, we didn't find the noise levels to be much different from earlier ASRock mini-PCs.

In the table below, we have an overview of the various systems that we are comparing the ASRock VisionX 420D against. Note that they may not belong to the same market segment. The relevant configuration details of the machines are provided so that readers have an understanding of why some benchmark numbers are skewed for or against the VisionX 420D when we come to those sections.