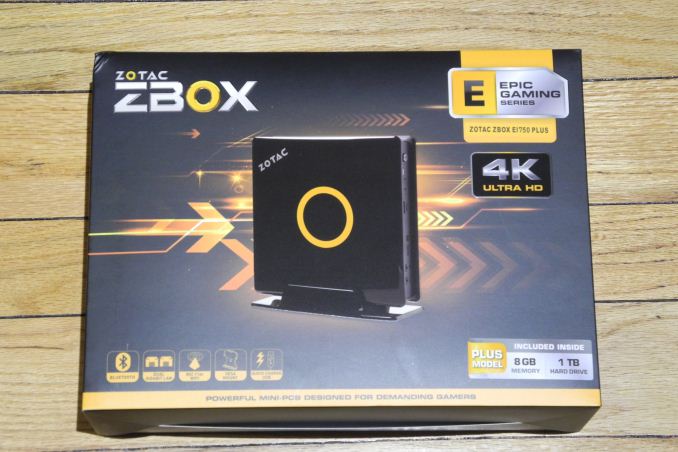 Intel's Crystal Well parts (-R series) with integrated eDRAM have arguably been the most interesting products in the Haswell line-up. In the early stages, only Apple had access to these parts. However, since the beginning of 2014, we have seen other vendors roll out products based on the -R series processors. The BRIX Pro (BXi7-4770R) was one of the first products to roll out with Crystal Well in the PC space. With a design reminiscent of the NUC, the focus was more on designing a compact platform rather than providing more features on the hardware side. The -R series processors are all OEM-only, so users have to look to PC manufacturers to get systems based on it. Expandability in terms of adding PCIe cards (such as discrete GPUs and/or wired network adapters) is ruled out, and one has to rely on what the OEM designs into the motherboard. Zotac has taken their full-size mini-PC chassis (similar to the one in the Zotac ID89) and put in a motherboard sporting a Core i7-4770R inside it to create the ZBOX EI750.

Zotac provides both barebones and Plus models, as is customary with all their pre-built PCs. The Plus model comes with a disk drive as well as some DRAM bundled. Our review configuration was the Plus model with the following configuration.

The ZBOX EI750 doesn't come with any pre-installed OS, but we do have a read-only USB key with Windows drivers. In addition to the main unit, the other components of the package include a 120 W (19V @ 6.32A) adapter, a US power cord, plastic stand / base holder for the main unit, a single 2.4 GHz / 5 GHz antenna for the Wi-Fi module, a DVI-to-HDMI adapter, screws for 2.5" HDD installation, a Quick Start guide and an user manual. We installed Windows 8.1 Professional x64 for our evaluation purposes. 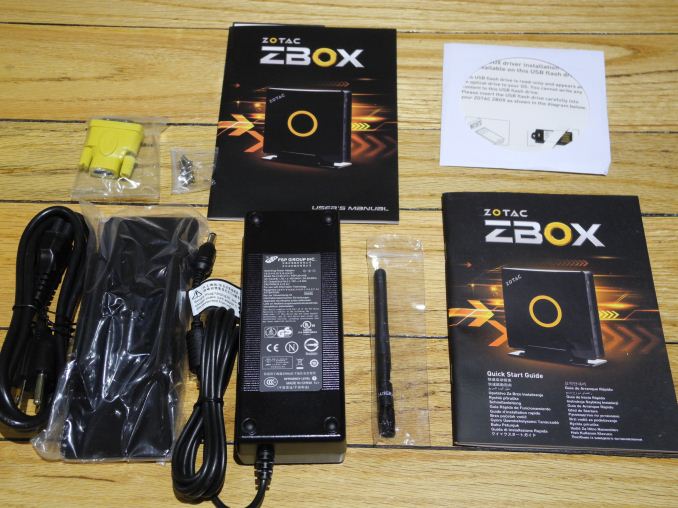 The stand-out aspects of the ZBOX EI750 compared to similar mini-PCs include the presence of two Display Port outputs, two GbE LAN ports and an optical SPDIF output. The gallery below takes us around the hardware in the unit.

Gallery: Zotac ZBOX EI750 Plus: In & Around the Unit

In the course of our review, we found that the EI750 Plus came up with some disappointing benchmark numbers compared to the BRIX Pro. It was quite obvious that the single-channel memory in the ZBOX was pulling it down. To simulate a typical end-user situation, we augmented the unit with an ADATA mSATA SSD (SX300) boot drive and replaced the original single Crucial SODIMM with 2x 8 GB ADATA SODIMMs having the same CAS latency of 11. The rest of the review will present benchmark numbers for both configurations. 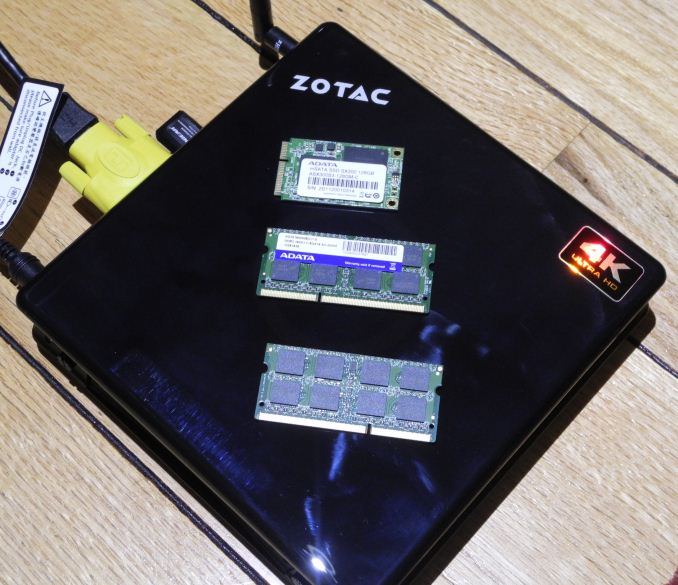 In the table below, we have an overview of the various systems that we are comparing the ZBOX EI750 against. Note that they may not belong to the same market segment. The relevant configuration details of the machines are provided so that readers have an understanding of why some benchmark numbers are skewed for or against the EI750 when we come to those sections.