The LZMA compression benchmark only measures a part of the performance of some real-world server applications (file server, backup, etc.). The reason why we keep using this benchmark is that it allows us to isolate the "hard to extract instruction level parallelism (ILP)" and "sensitive to memory parallelism and latency" integer performance. That is the kind of integer performance you need in most server applications.

This is more or less the worst-case scenario for "brawny" cores like Haswell or Power 8. Or in other words, it should be the best-case scenario for a less wide "energy optimized" ARM or Atom core, as the wide issue cores cannot achieve their full potential.

One more reason to test performance in this manner is that the 7-zip source code is available under the GNU LGPL license. That allows us to recompile the source code on every machine with the -O2 optimization with gcc 4.8.2. 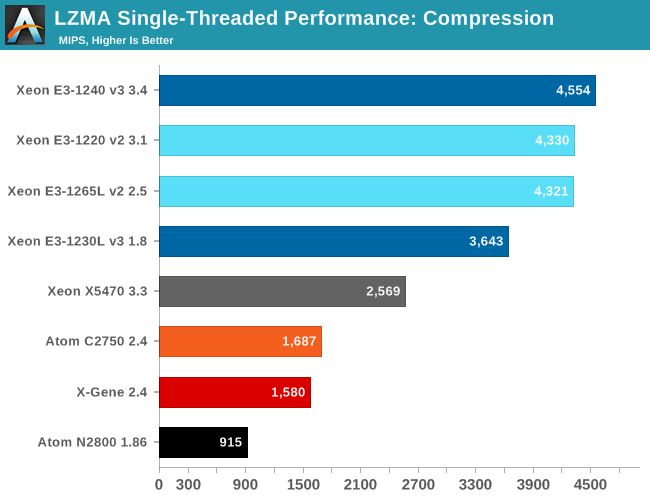 Despite the fact that the X-Gene has a 4-wide core, it is not able to outperform the dual issue Atom "Silvermont" core. Which is disappointing, considering that the AppliedMicro marketing claimed that the X-Gene would reach Xeon E5 levels. A 2.4GHz "Penryn/Harpertown" core reaches about 1860, which means that the X-Gene core still has a lot of catching up to do. It is nowhere near the performance levels of Ivy Bridge or Haswell.

Of course, the ARM ecosystem is still in its infancy. We tried out the new gcc 4.9.2, which has better support for AArch64. Compression became 6% faster, however decompression performance regressed by 4%....

As a long-time CPU enthusiast, you'll forgive me if I find the progress that Intel made from the 45nm "Harpertown" (X5470) to 22nm Xeon E3-1200 v3 pretty impressive. If we disable Turbo Boost, the Xeon E3-1240 at 3.4GHz achieves about 4200. This means that the Haswell architecture has an IPC that is no less than 63% better while running "IPC unfriendly" software.

The Xeon E3-1230L and Atom C2750 run at similar clock speeds in this single threaded task (2.8GHz vs 2.6GHz), but you can see how much difference a wide complex architecture makes. The Haswell Core is able to run about twice as many instructions in parallel as the Silvermont core. Meanwhile the Silvermont core is about 45% more efficient clock for clock than the old Saltwell core of the Atom N2800. The Haswell core result clearly shows that well designed wide architectures remain quite capable in "high ILP" (Instruction Level Parallelism) code.

Let's see how the chips compare in decompression. Decompression is an even lower IPC (Instructions Per Clock) workload, as it is pretty branch intensive and depends on the latencies of the multiply and shift instructions. 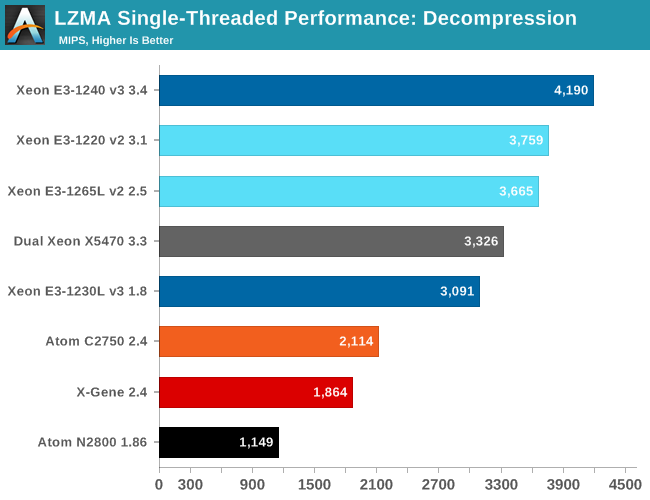