The Anatomy of a Package

Let's take a look at a present day CPU; for this example we'll use the AMD Duron running at 1GHz. 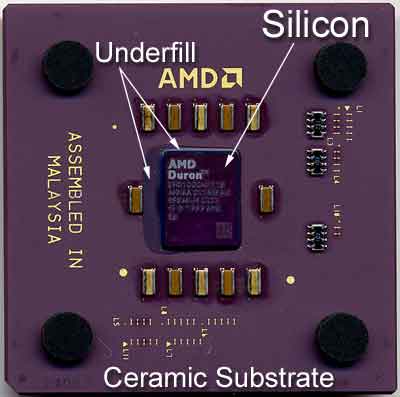 In the center of the CPU you have what we always refer to as the "core." This is the silicon where it all takes place; all of the calculations, load/store requests, branches, everything happens right here.

In the case of this Duron the silicon is connected to the rest of the chip (known generically as the package) using what is known as a flip-chip package. The reason it is called "flip-chip" is because the exposed part of the core you are looking at is actually the "bottom" of the core; it is flipped so that the core can have direct contact with your heatsink to improve cooling which is vital when looking at the heat production of today's processors.

On the other (non-exposed) side of the silicon we actually have the "interface" or interconnect between the silicon and the package. This Duron CPU has 25.18 million transistors in that tiny piece of silicon; groups of those transistors have to be connected to the underside of the package where the pins are located so the CPU can actually communicate with the outside world. The connection between the silicon and the packaging itself is, in this case, made using very small solder bumps that are simply referred to as flip chip bumps. For this particular CPU there are about 3,000 flip chip bumps on the underside of that piece of silicon. For comparison purposes the Pentium 4 has about 5,000 flip chip bumps and the Intel Itanium has around 7,500. As you can probably guess, these solder bumps have to be very small and very carefully placed. As CPUs increase in complexity, the placement of these bumps will become exponentially more difficult. Keep this in mind as we'll come back to this problem later on. 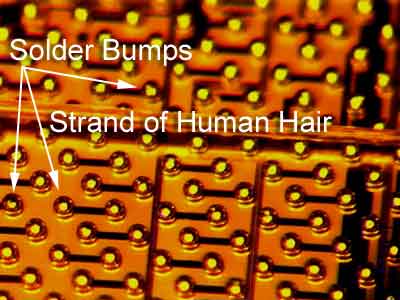 Since all of the processing work gets done on the silicon, the silicon generates quite a bit of heat. If you touch the package of a CPU while it's operational it's not usually hot at all; if you were to stick your finger on the core of a CPU however, you'd quickly be filing a lawsuit against one of our beloved CPU manufacturers. This temperature difference can actually be pretty problematic. As you know, things can expand and contract according to their temperature. So if we have a core running at 50 degrees Celsius and a package that is running at 27, we're going to end up with some problems where the core is expanding at one rate while the package expands at another. If this goes untouched, something is going to crack unless there's a stress reliever.

This is where that bluish/purplish material surrounding the core comes into place. You'll notice that it covers the sides of the core and even seems to extend out past the core. This material is known as the underfill. The underfill acts as a stress reliever and it is present between the silicon and the package, as well as around the base of the silicon-package interconnect to compensate for temperature differences. Since the underfill plays such a key role in connecting the silicon to the package, problems with the underfill can quickly result in defective CPUs. This is one of many cases where you could have a perfectly fine and high yield core, but the packaging holds you back.