The Snapdragon 400 is in a lot of devices these days, and is starting to appear in quite a few Windows Phones as well, but this is the first Windows Phone 8.1 device with Snapdragon 400 we have tested, so it will be interesting to see how it compares to Android and iOS with the move to quad core. Just to clarify what we are working with here again, it’s a quad-core Cortex A7 CPU paired with Adreno 305 graphics. We’ll also compare it to a Lumia 1020, and a Lumia 620, both of which are running Krait cores (1.5 GHz for the 1020, and 1 GHz for the 620) as we need to know if four A7s at 1.2 GHz are a real upgrade over Krait. 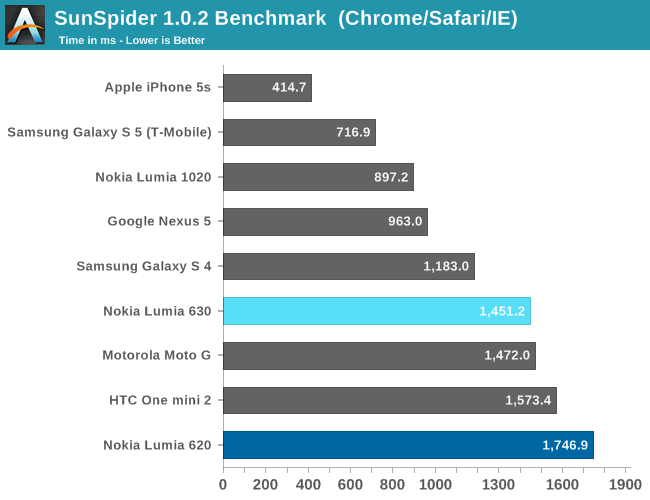 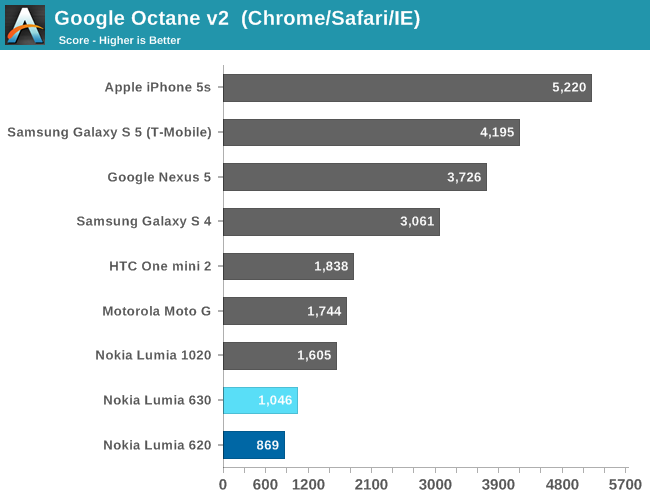 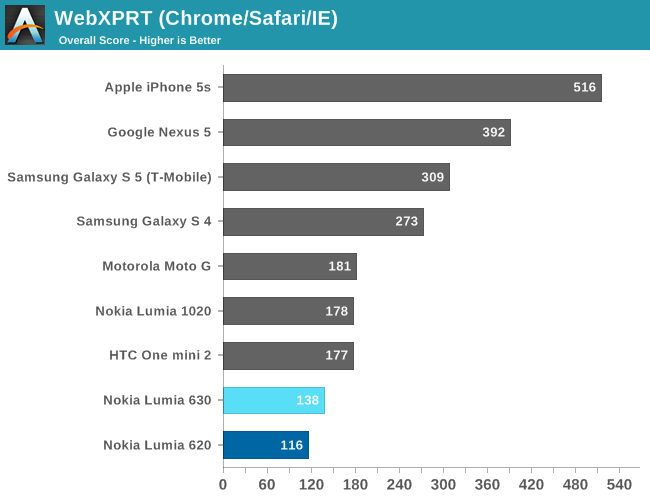 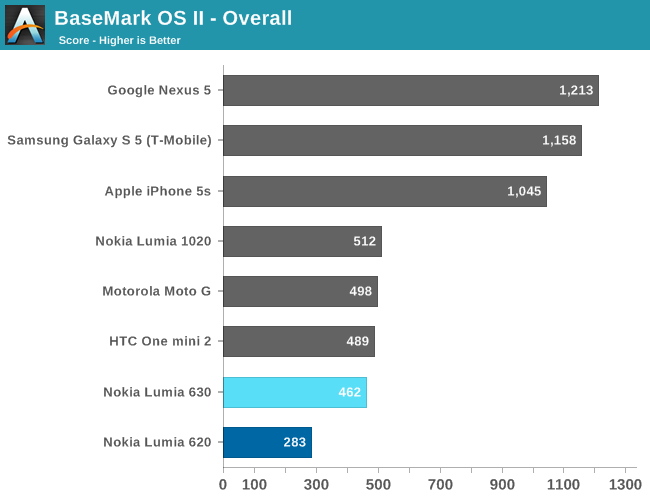 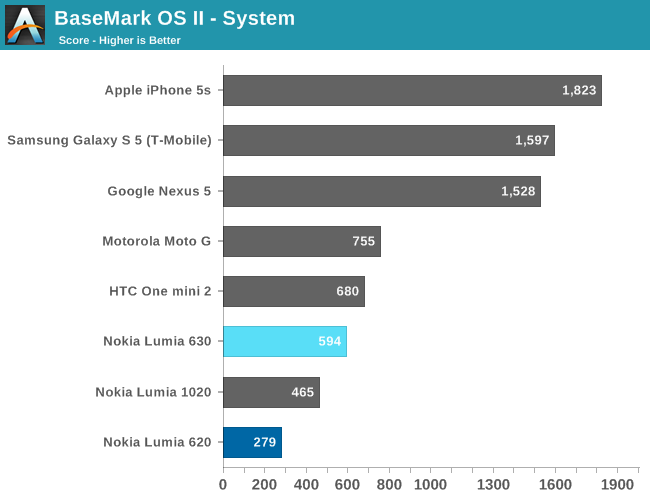 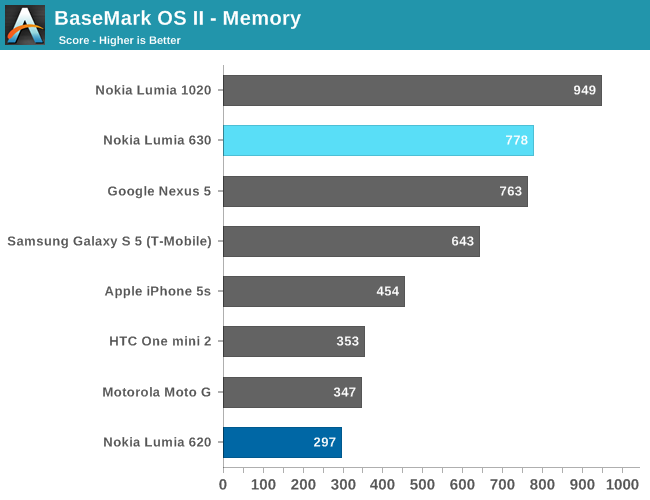 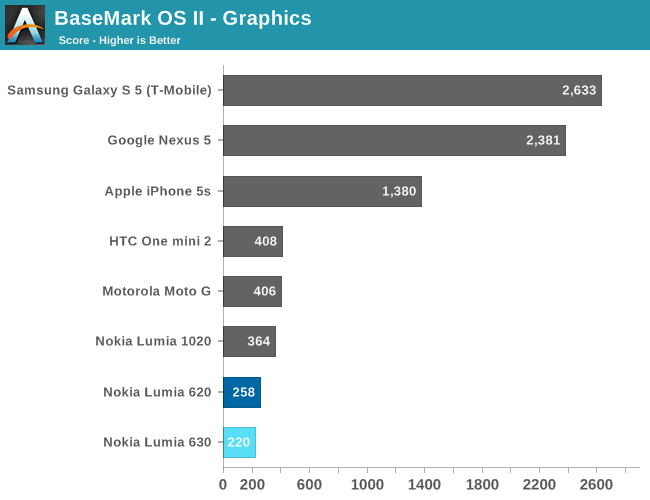 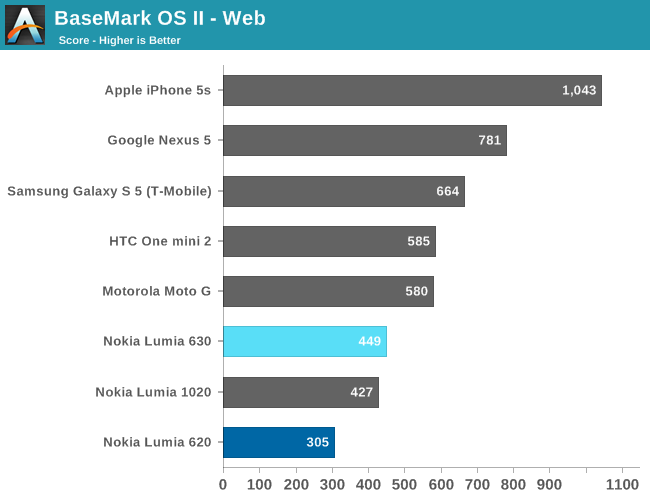 Performance is definitely an improvement over the dual-core 1 GHz Krait of the 620, but it’s not spectacular. It’s still slower than the dual-core 1.5 GHz of the 1020. A good comparison though is the Moto G, which is close to the same price, and sports the exact same SoC under the hood. Sunspider is very close between the two, but Kraken and Google Octane are much faster on the Moto G. Windows Phone 8.1 even with IE 11 now still has some work to do to be competitive on Javascript performance. WebXPRT falls into the same situation, with IE just not being as fast as Chrome.

Looking at Basemark II results are a bit closer, with the overall score being close. The Lumia 630 handily beats the Moto G in memory performance, but the Moto G wins the rest of the tests. We’re still looking at a performance deficit for most tasks with Windows Phone 8.1 which is something Microsoft will need to work on going forward.

Windows Phone as an OS has always been very smooth, and this iteration is no different. The 630 is definitely an improvement over last year’s version, but it isn’t going to blow anyone away with its performance.

On the graphics side, we generally look at benchmarks which stress the GPU of the device. With Windows Phone, this means Rightware’s Basemark X 1.1. The problem here is that Basemark X requires 1 GB of memory to install, so it won’t run on the 630 with its limited RAM. As stated earlier, this also limits a lot of the gaming apps from being installed. If you play a lot of games, avoid this device.

Storage performance isn’t likely to be at the top of an engineer’s list when so cost constrained, and it shows with the 630. We’re at a disadvantage with Windows Phone again here because none of the standard storage benchmarks run on this platform. There are several benchmarks available on Windows Phone which do test storage, but they are either very inaccurate or give abstract results. For that reason we’ll look into a storage benchmark of our own for Windows Phone but it’s not available as of yet for this review.

The only numbers I was able to extract off of the 630 was basic file copy speeds. A large file transfer resulted in a sequential write speed of only 7.5 MB/s which isn’t fantastic. Copying small 4 KB files was a very poor 0.03 MB/s. File copies to the device over USB 2 came in at 8.5 MB/s and file copies from the device over USB 2 resulted in 22.5 MB/s. When we get the storage benchmark completed I'll add the numbers for the 630 to bench, but I don't expect it to be very fast.