The first thing you notice about the APPRO 1124 is its incredible depth; the 1U chassis is 17.1" wide and with its integrated sliding rails it can fit in a 19" rack just like any other rackmountable case.  The chassis is over 27" deep which is a bit unusual for 1U cases but taking a peak under the hood explains what all the room is for.

The externals of the chassis are both attractive in functionality and in form.  The front panel is home to the bare essentials; power and reset buttons, power, disk and warning lights are all commonplace on a server.  It is clear that the 1124's chassis was custom tailored to the Tyan Thunder K7, made evident by the two network activity lights that report activity on the dual on-board 3Com NICs of the motherboard.

Just below the row of lights and switches are the four hot swappable drive bays.  The 1124 features a SCA backplane that connects directly to the Tyan's on-board Adaptec Ultra160 SCSI.  For those of you that aren't familiar with the SCA SCSI specification, SCA is a connector specification that stands for Single Connector Attachment.  As the name implies, SCA devices only require a single connector that handles the interface, power and all jumper settings and connections.  Whereas most Ultra160 SCSI drives feature 68-pin interface connectors and require a 4-pin power connector as well as jumpers to be set, SCA drives use a single 80-pin connector to handle all of that.  Using a special controller board, these drives become "hot swappable" meaning that they can be added and removed without shutting down the machine, which is very important in a server environment to minimize downtime in the event of a drive failure. 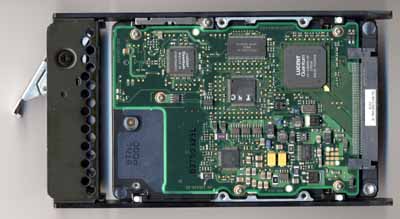 While most 1U cases would stop at the four drive bays, the custom made 1124 chassis includes a slim 24X CD-ROM drive much like what you'd find in a thin and light notebook.  By no means is a CD-ROM drive required in a server, but this is definitely an appreciated convenience.

We mentioned that the 1124's chassis was attractive in its functionality as well as its form; we've already discussed the latter as the case is very sleek and has a very convenient integrated CD-ROM drive, but what about its functionality?

The case cover is made up of three panels, two of which require no tools to remove.  The first of these panels is at the rear of the chassis and is secured to the case via two thumbscrews.  This is the largest panel and covers the Tyan Thunder K7 motherboard as well as the power supply.  Removing this panel reveals some of the eloquence of the APPRO design that is visible from the custom power supply.  The 1124's power supply is a 600W unit that extends over half of the length of the chassis.  Obviously the reason for the powerful unit is to accommodate the maximum of four hard drives and power hungry Athlon MP CPUs.  One thing APPRO didn't take into account is that in the 1U chassis there is no way to take advantage of an AGP Pro110 card, much less an AGP card itself meaning that factoring in the 110W AGP power requirement was unnecessary.  APPRO is aware of this and they will be modifying the power supply accordingly in the future. 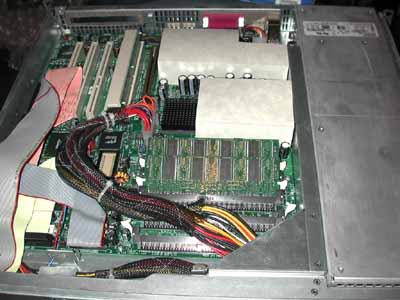 There is only one usable PCI slot due to height constraints as the PCI slot is adapted using a riser to accept horizontally mounted cards.  Luckily the fact that the motherboard features dual on-board Ethernet controllers, on-board video and on-board Ultra160 SCSI means that you'll probably not need more than one PCI slot.  In our case, the sole 64-bit/33MHz PCI slot was used for our RAID adapter.

The Tyan Thunder K7 occupies the majority of the room beneath this first panel, and the board itself is relatively unchanged from when we first looked at it back in June.  The only difference, and a very important one at that, is that the AMD 762 North Bridge now features a heatsink atop its heat spreader.  As we noted in our original 760MP review, the 762 North Bridge became extremely hot during normal operation and without a heatsink to help dissipate the heat it'd be tough to keep the platform running stably in such a cramped area.

Cooling is a major issue for this platform and in a 1U chassis that is less than 2" high, the issue is even more serious.  There isn't enough headroom for a regular sized heatsink, much less one with a fan mounted on it.  Because of this, the 1124 also implements a custom made cooling solution to not only circulate air through the extremely small case, but to also cool the dual Athlon MP processors.