The second panel that covers the 1124 is also removable without any tools.  You simply depress two buttons allowing the panel to slide back a bit, then it is simply tilted and lifted off.  Beneath the panel lay four blowers that provide the cooling necessary to keep case temperatures at a minimum. 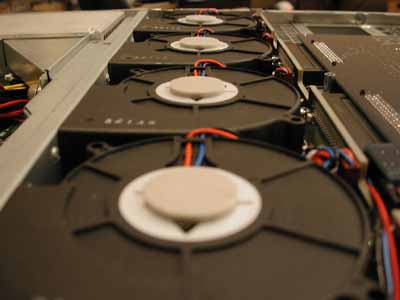 The way the four blowers work is simple; they are mounted slightly off of the bottom of the chassis, so they can pull in air from the area below and behind them.  As luck would have it, behind the blowers are the four hot swappable drive bays with ventilation holes at the front of the case.  The blowers take in cool air from the outside, and in the process they manage to cool the four drive bays.  The blowers are pointed at the back of the case, towards the motherboard and the CPUs. 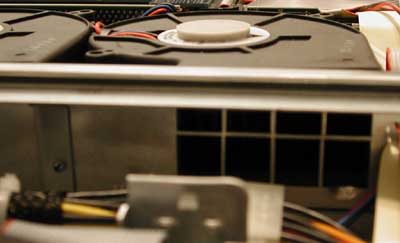 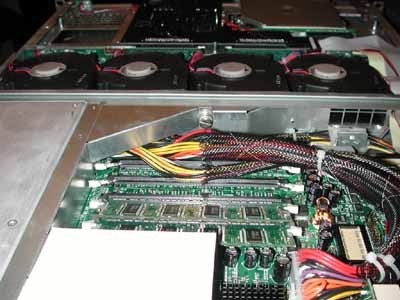 The other three blowers are blocked off from the motherboard compartment and are all blowing into a channel adjacent to the power supply.  This channel takes the quickly moving air and uses it to cool the power supply, as well as cool the CPUs via two ducts that have openings next to the CPUs. 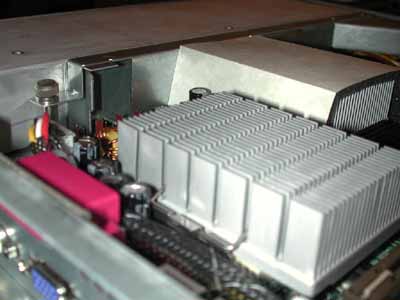 Combined with the large surface area heatsinks on the processors, the cool air is sent parallel to the heatsink fins thus removing the heat from the CPUs.  In order to prevent the heat from simply rising and not being  pushed away by the stream of air, the heatsinks are covered with cardboard jackets to help channel the air. 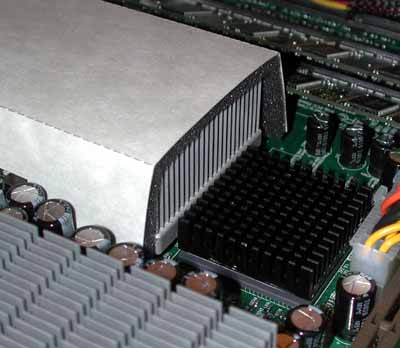 In the case of the CPU closest to the 762 North Bridge, the air flowing over the bottom surface of the heatsink is used to cool the 762’s heatsink as well.  Finally the air is exhausted out the rear of the chassis.

How effective is this cooling setup?  Although quite loud, it does its job very well.  Our Forums Database Server makes use of four 10,000RPM Quantum Atlas 10K Ultra2 SCSI hard drives operating in a RAID 10 configuration.  All four of the drives are constantly being read from or written to, and if you’ve ever had any experience with 10,000RPM SCSI drives, after even 30 minutes of use inside a case you definitely don’t want to handle one.  Removing the drives after being under heavy use for quite a while revealed that the surface of the drives was barely warm to the touch; the APPRO cooling setup had done its job well.  The heat being exhausted from the case was quite warm, putting the burden on the server cabinet to have good cooling to get rid of the hot air.