Microsoft made no sacrifice in battery capacity in pursuit of Surface Pro 3's thin chassis design. The new tablet features an integrated 42Wh battery just like the previous two models. Charging duties are handled by an external 31W charger with a brand new magnetic connector. Microsoft never seemed to get a good MagSafe clone working in the previous models, so Surface Pro 3 abandons the previous design entirely in favor of something a bit more sensible. 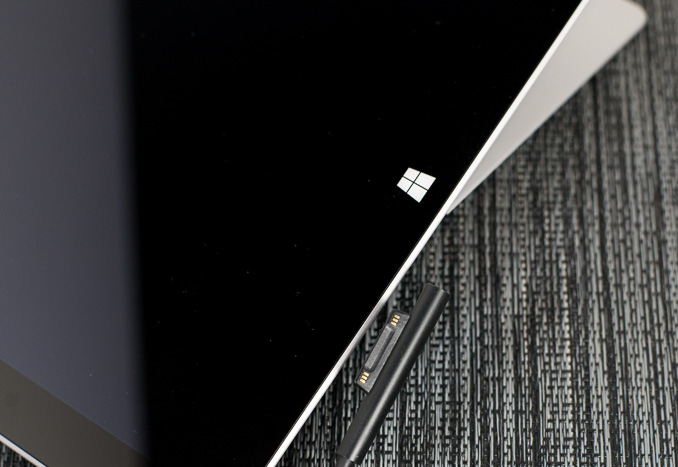 The new connector no longer looks like an oversized MagSafe connector, and instead features a thin plastic insert that mates with the charge port on Surface Pro 3. Charge time hasn't changed, you can fully charge the device in around 2.62 hours: 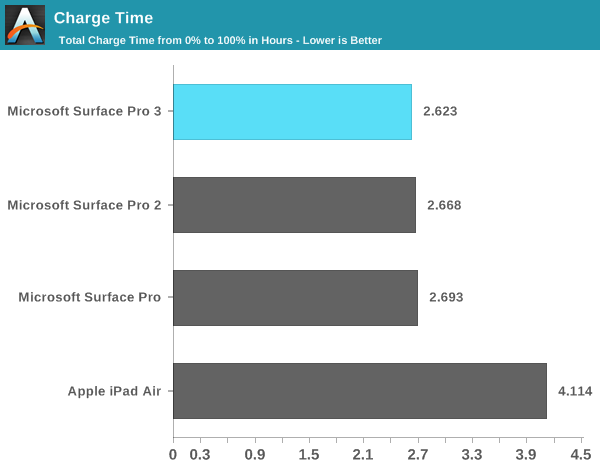 The device-side connector features 40 pins but you only need 12 of them to charge the device. The remaining pins are used for Gigabit Ethernet, USB, DisplayPort (up to 4096 x 2304) and audio. Microsoft seems hell bent on avoiding Thunderbolt at all costs so instead of embracing the standard it has created a custom alternative of its own doing. The benefit to Microsoft's connector is it can obviously deliver more power than Thunderbolt can, the downside is that it can't send PCIe and thus you don't get support for any ultra high bandwidth external storage devices. I still would rather see Microsoft implement Thunderbolt as there's at least an existing ecosystem built around that but here we are three generations into Surface and if we haven't seen it by now I don't think we're ever going to.

The supplied power adapter includes a USB charge port capable of delivering 1A at 5V. 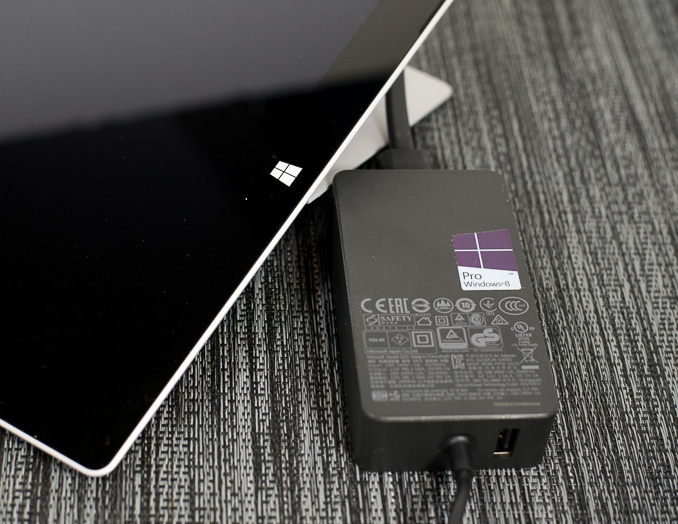 As a laptop, Surface Pro 3 delivers comparable battery life to other optimized Haswell ULT designs. I threw in Sony's Vaio Pro 13 into the mix because it has a similar sized battery (37Wh vs. 42Wh) and is one of the most power efficient Windows Ultrabook platforms on the market. Surface Pro 3 manages to deliver similar battery life, which means it's a little less power efficient but the two are within the same range at least.

It's worth noting that there's a substantial advantage in battery life if we look at the 13-inch MacBook Air running OS X. I only mention this because of Microsoft's insistence on comparing Surface Pro 3 to Apple's popular line of notebooks. 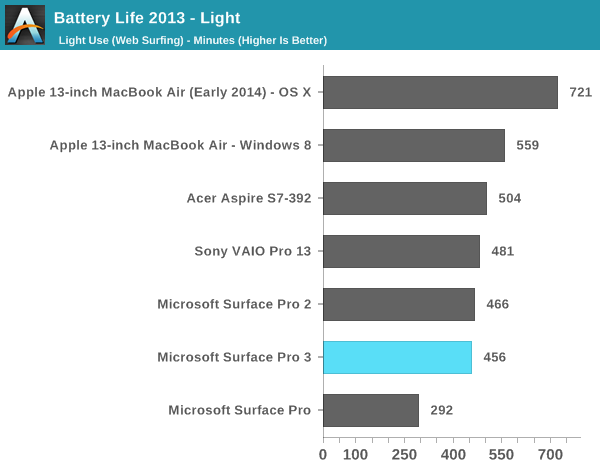 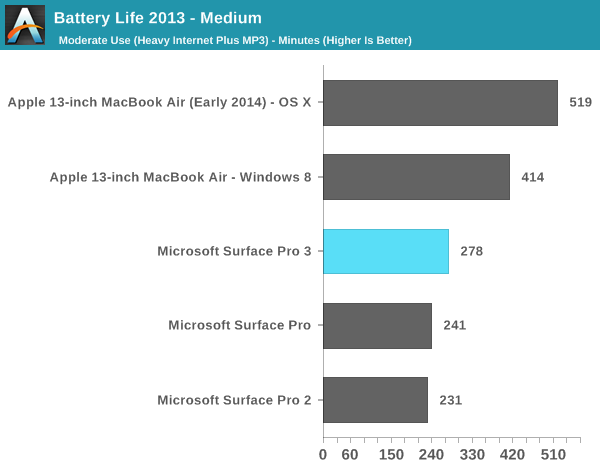 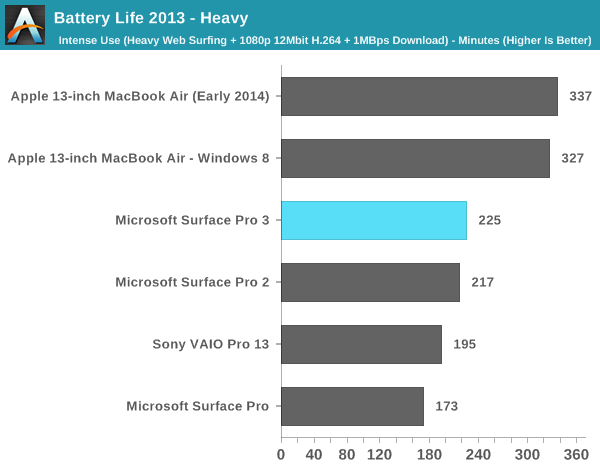 Tablet workloads are going to be far more display power bound than anything else. Here we see 7.58 - 8.03 hours of continuous usage, a slight regression compared to Surface Pro 2. Video playback remains more power hungry than web browsing, which is something I've noted in previous tablet-evaluations of Intel's Core silicon. I don't believe Intel's Core processors are very optimized for video decode power consumption. If anything is going to change with the move to Broadwell and Core M I suspect video decode power may be it. 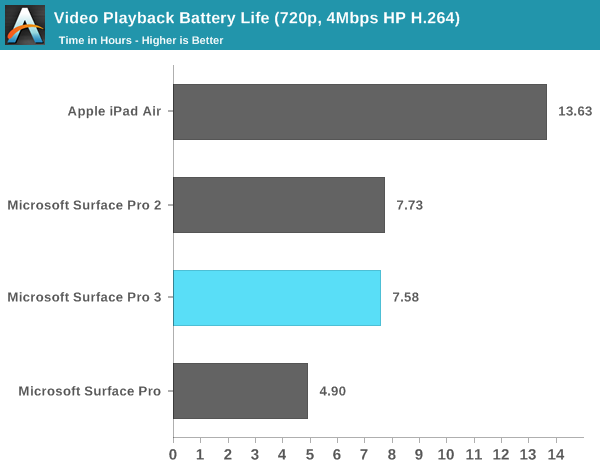 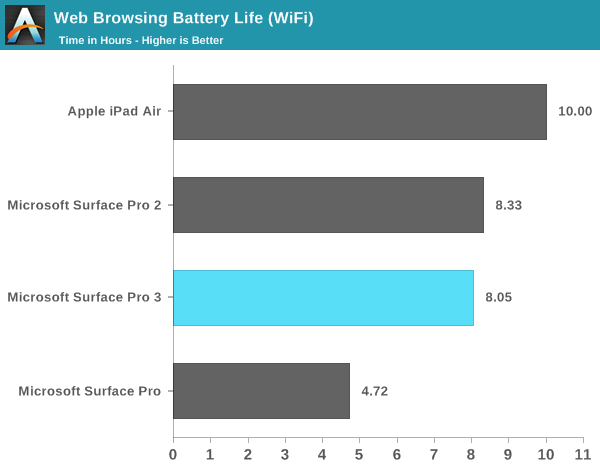