The $400 price tag puts the Deluxe in the firing line. Users spending this much want as much as they can get. We have already mentioned that the ‘Z97-Deluxe (NFC & WLC)’ comes with Thunderbolt 2, a Near Field Communications hub and a Wireless Charging pad, which forms part of the package. These certainly push the cost a big higher, but the rest of the additions are similarly plentiful.

In the Z97-Deluxe box we have: 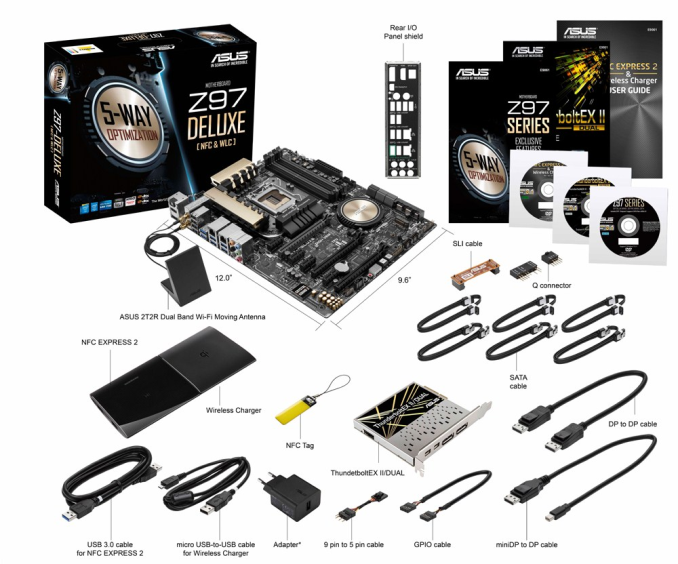 At this point I struggle to recall any motherboard box with more equipment in terms of actual number. Back with the Rampage IV Black Edition we had more of an engineering feat with the ROG OC Panel, but the Deluxe wins for cables, chargers, add-in cards, more cables, and utilities. 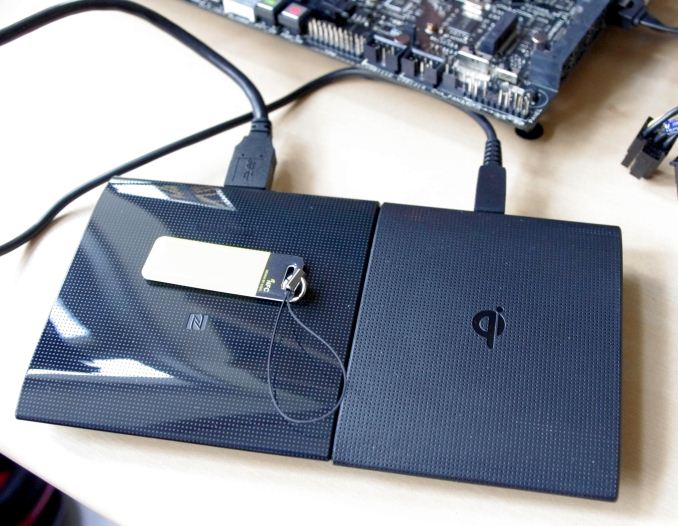 The NFC and Wireless Charging tool are designed to be of a similar shape and although it looks like they lock in together, they do not, which is actually a shame (would make it easier to move about). The WLC is Qi compatible, and connects to any USB outlet, hence the inclusion of a mains to USB adapter in the box. The NFC Express 2 pad connects to the PC via USB 3.0, and provides two extra USB 3.0 ports from a hub. 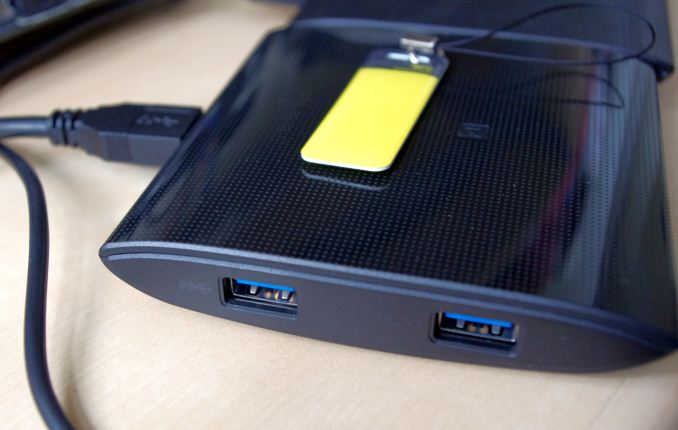 When the NFC device is first plugged into the PC, it requires a couple of drivers provided on the disk, especially for the hub.

The Thunderbolt 2 card comes with a GPIO cable and an appropriate adapter to allow it to connect to the motherboard: 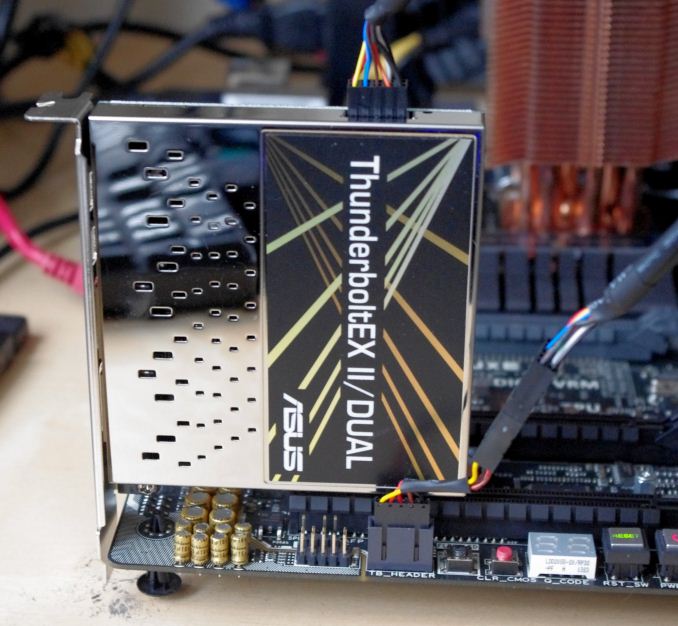 Because TB2 allows both video streams via DP and also data over PCIe, ASUS includes several cables for the rear. 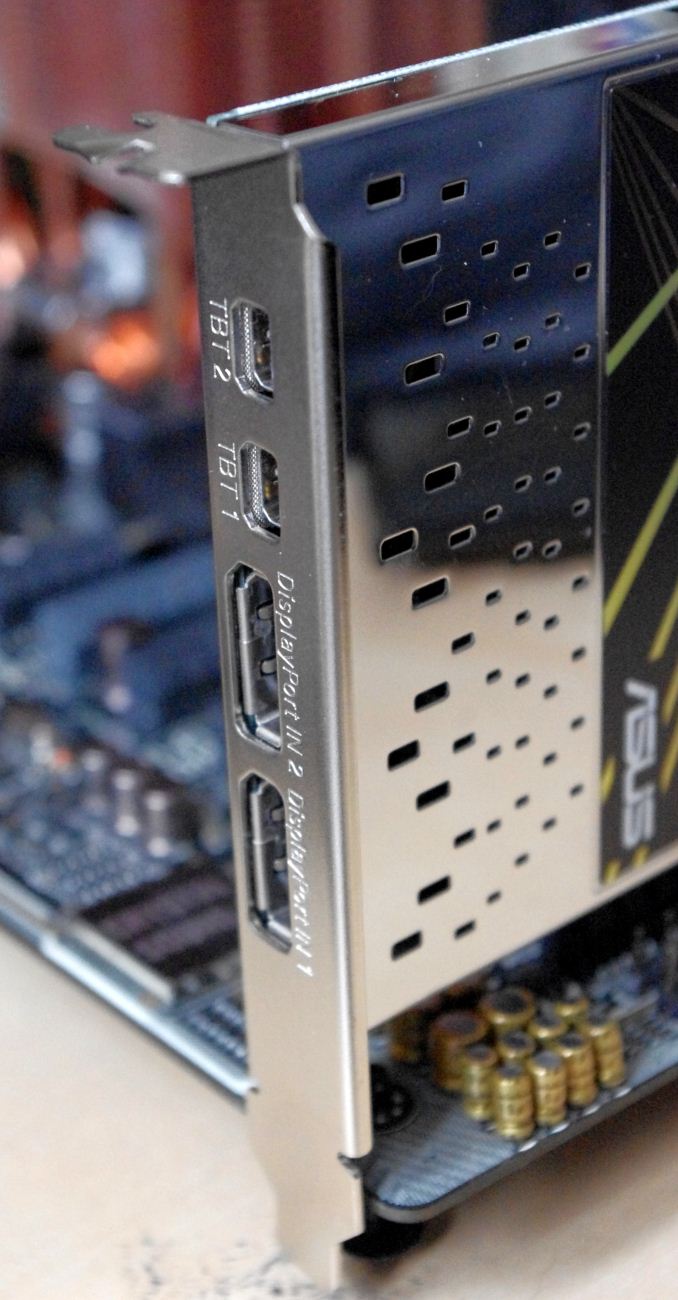 According to the manual these have to be used in conjunction with the motherboard IO ports, such that each of the DisplayPorts are connected:

It does not say if it works with a fully discrete GPU, or if it has to be on the integrated graphics. However, according to the manual, there are several different layouts possible via the daisy chaining rule, as long as the DisplayPort monitors are at the end of the chain: 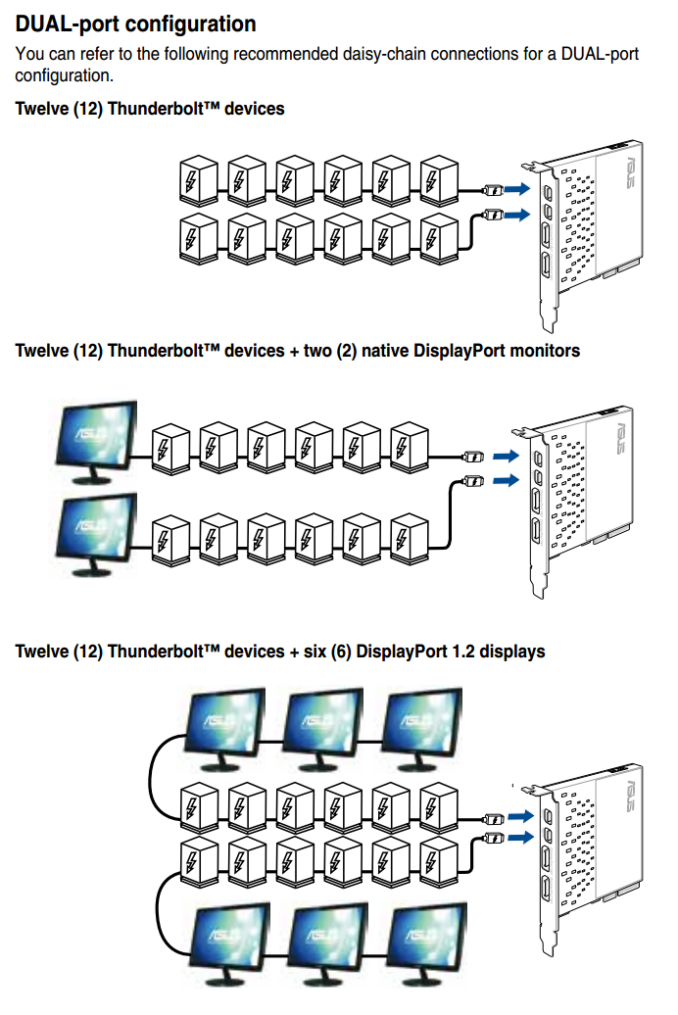 Overclocking options on non-ROG motherboards have a big boost due to the BIOS options, helping users with automatic overclocks by letting them choose their cooling for a set of pre-arranged values. This is a step up from the ‘Fast’ or ‘Extreme’ options we used to have, but it also complements the 5-Way Optimisation overclocking method in the software.

In terms of the overclocking performance, our average/lackluster CPU sample managed 4.6 GHz on the Z97 Deluxe before succumbing to peak temperature issues. The 5WO automated overclocking was very aggressive, and due to the Adaptive voltage mode used caused OCCT to apply a lot of voltage during our test, causing a peak temperature of 97ºC. Users should update the DIP5 portion of AI Suite to the latest in order to show the overclock – our software version on the disk may have been a bit BETA where overclocks would not be applied but the latest version from the website works fine.