We’ve already covered the core design, keyboard, touchpad, cooling, etc. several times so I’m not going to spend a long time rehashing that subject for this review. Aesthetically, I think the GT70 looks a bit dated, but at least this version isn’t quite so garish/gaudy as the Dragon Edition at the GTX 780M launch. The short summary is that the GT70 is a large and rather bulky gaming notebook, with the capacity to support three mSATA SSDs in RAID 0, or two 2.5” drives, an optical drive, and it has a moderate quality 1080p matte display. Cooling performance is similarly merely acceptable, as MSI uses a single large heatsink + fan to cool both the CPU, GPU, and chipset; the result is that under load (e.g. gaming) the GT70 can get a bit loud; that said, I didn’t see any indication of CPU or GPU throttling during testing. 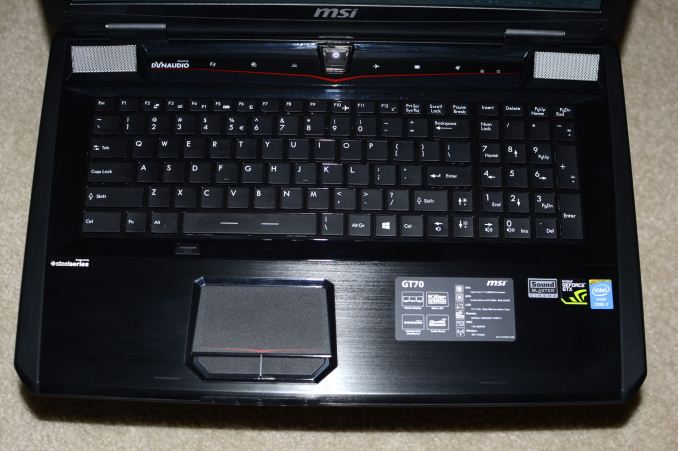 Personally, some of the most important elements for me with any laptop are the user facing devices, and by that I mean the keyboard, touchpad (and potentially touchscreen), and display. Some people might be willing to overlook flaws in these areas, but if any of these areas fall short it greatly detracts from the overall functionality of a laptop. Let’s quickly cover each of these in turn.

The good news is that, outside of a minor complaint regarding MSI’s location of the FN and Windows keys, and the 10-key having a half-size “0” key, the keyboard works well. The backlighting is zoned RGB, and the SteelSeries software now allows you to remap/reprogram any key. So that bit about not liking the default location of the FN and Windows keys could be easily remedied…except you can’t remap the FN key [sigh]. Taking things a step further, the SteelSeries software also allows you to create and assign macros to every single key (except FN), and you can create four custom layers with different macros and ligting effects/colors on each – switching between them via the FN + 1…4 key combination. It’s really quite slick and can truly be a differentiating factor between gaming notebooks, especially if you’re the type of gamer that likes using/creating macros.

The touchpad story isn’t quite so good, as MSI continues to use an older touchpad – specifically Synaptics v7.2 hardware. Synaptics is generally a good choice and the tracking and multi-touch support work well enough, but the lack of a clickpad is a mistake in my opinion and the size of the touchpad is somewhat small in today’s market. However, for gaming I expect most people will use a dedicated mouse regardless, so the touchpad isn’t really a problem. Having it recessed slightly also looks a bit dated as far as designs go, but it does help to prevent inadvertent touchpad activation while typing/gaming.

As for the display, I’ve been a bit spoiled by the recent spate of IPS panels, and it’s sad that MSI hasn’t looked at upgrading that element. Maybe there just aren't many (any?) good 17.3" panels out yet, but I've seen so many IPS panels in Ultrabooks and other laptops that it's a bit disheartening to be back to a TN panel. Pre-calibration, the colors on the GT70 panel are very skewed with oversaturated blues (with undersaturated reds), and while the display hits a reasonable 350 nits maximum brightness, post-calibration (i.e. after correcting for the massively overblown blues) that drops to only 300 nits. In fact, in order to get the red levels close to where they’re supposed to be, I had to calibrate at 90% brightness, which means those who want good color accuracy will have to compromise a bit on battery life. But battery life isn’t a huge factor here, so it’s not the end of the world, and at least post-calibration the colors are quite good.

If I had one major thing other than the LCD panel that I’d like to see MSI change, it would be their cooling system. It gets the job done right now, but Clevo, Alienware, and ASUS are all using dual fans for their competing notebooks, and there’s a reason for that. GTX 780M and now 880M can use a lot of power, and even though MSI proves it’s possible to cool both the CPU and GPU with a single fan, a lot of the heat is concentrated in the back-left corner and the GT70 tends to run louder and hotter than other competing gaming notebooks.

When you look at newer designs like the Razer Blade Pro and MSI’s GS70, they look far more attractive and aren’t nearly as bulky. With such designs readily available, I’m not really convinced about the need for a large notebook with GTX 880M. You might have to turn down a few settings in games to hit 60+ FPS with a GTX 870M, but even High detail without anti-aliasing looks quite good (i.e. better than current consoles) and games will run well on a slightly slower but far more attractive notebook. However, large notebooks do offer more in the way of expansion options, so for example the GT70 supports up to three mSATA drives, two 2.5” drives, four SO-DIMM slots, and it still includes an optical drive. The sleeker GS70 on the other hand has a single mSATA slot, two SO-DIMM slots, and no optical drive. I prefer that over the size of the GT70, but not everyone will feel that way.

Ultimately, if you want maximum gaming performance in a notebook, right now GTX 880M is where it’s at. The only way to currently beat the GTX 880M for mobile gaming is by using two of them in SLI, which is a topic for another day. So let’s see what the NVIDIA’s latest mobile monster can do….