Overclocking: Staying at the Top

Despites the fact that ASUS is a major OEM supplier, their products are also welcomed by the majority of the hardware community for their strong overclocking abilities and rock solid performance.  ASUS clearly wanted to do it once and for all with the P4T, making it one of the best Pentium 4 boards in the market.  And throughout our thorough testing, we noticed that ASUS covered almost every category we could come up with.

The P4T features a fully jumperless configuration so you can perform almost all overclocking right inside the BIOS.  At the same time, ASUS also keeps a set of dipswitches for you to perform overclocking on the board as well.  While this is definitely not as easy as jumperless setup, the dipswitches are very useful for OEM builders who want to prevent customers from changing  BIOS settings incorrectly.

Even though the P4T allows you to change your multiplier ratio inside the BIOS or using the dipswitches, it only works on Intel’s internal engineering samples that are multiplier unlocked. All CPU’s available on the market should be completely multiplier locked. Fortunately, FSB overclocking is still a good way to overclock, and ASUS has done a very good job in that area as well.  Within the BIOS, you can easily select FSB speeds between 100 / 103 / 105 / 108 / 110 / 112 / 115 / 118 / 120 / 122 / 125 / 130 / 133MHz.  That’s a decent selection, but we’d still like to see FSB speeds adjustable in 1MHz increments. 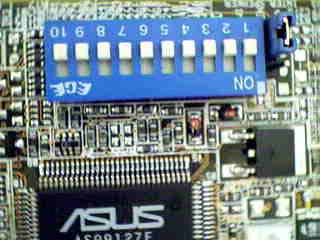 The set of dipswitches on the P4T.

Unfortunately, ASUS was not able to implement all the possible FSB speeds inside the BIOS, and so for speeds from 133MHz to 156MHz you will have to go to the dipswitches.  Using the dipswitches the extra FSB speeds available are 136 / 138 / 140 / 142 / 144 / 145 / 148 / 150 / 152 / 154 / 156 MHz.  When you select FSB speeds inside the BIOS, the corresponding PCI and AGP bus speed are set automatically to be as close to the spec as possible, but with the dipswitches you can actually have several selections for PCI and AGP speeds with the same FSB speed setting.

ASUS also provides some CPU core voltage settings inside the BIOS - from 1.700 to 1.850V in 0.025V increments, which should be sufficient for most overclocking endeavors.  Unfortunately, I/O voltage tweakings are not available on the P4T, something that has proven to help maintain stability of the system under extreme overclocked situations.

With most RDRAM setups memory tweaks are not as common as what we would find on boards using SDRAM simply because the timing is more tightly controlled.  Luckily, ASUS does offer a one setting to tweak RDRAM timing when you overclock the FSB speed.  This setting allows you to control the ratio that the RDRAM runs at, either 3x or 4x.  Specifically, with a default FSB of 100MHz, 3x allows you to run your RDRAM at PC600 and 4x allows you to run the RDRAM at PC800, which are exactly the two RDRAM standards commonly available today. (Don’t forget that RDRAM also operates in a DDR fashion, hence the 4x setting results in PC800 operation with a 100MHz FSB).

Unfortunately since most PC800 RDRAM modules are not stable at speeds higher than 900MHz, ramping up the FSB speed without reducing the memory ratio could limit the overclocking potential severely.  At 133MHz FSB with a 4x memory ratio, your RDRAM will effectively be running at 1066MHz, which is not entirely practical.  However, if you drop your ratio to 3x, and you will be back at 800MHz, which is right on the spec.  Using the same philosophy, ramping the FSB speed to 150MHz with a 3x memory ratio, your memory clock will effectively be 900MHz, which is still marginally acceptable provided that you have high quality modules.

Like the Intel reference board, ASUS has included a heatsink on the 82850 MCH, with a new mounting mechanism to make sure the MCH is running at an acceptable temperature range.  The size of the heatsink is considerably larger than those used on chipsets in the past, but is typical of what we’ve seen on other i850 boards.  ASUS has also decided to once again use their own ASIC chip for hardware monitoring, which provides readings for three temperatures and three fan speeds from within the BIOS.  There is a connector on the motherboard for an external thermistor that can measure any temperature in the system, but ASUS did not include an actual thermistor with our evaluation sample. 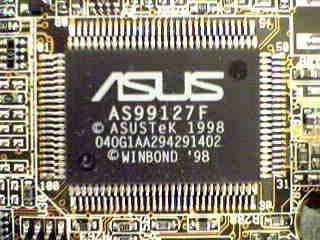 The ASUS ASIC for hardware monitoring 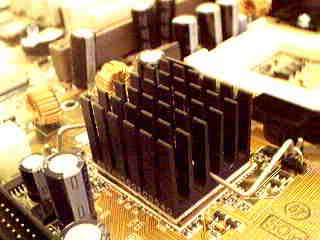 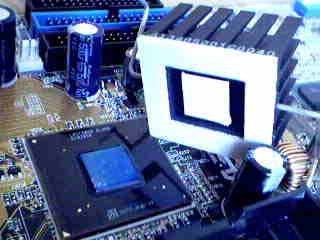 The new mounting mechanism allows you to remove the heatsink easily

Our overclocking tests on the P4T show that the board is truly a phenomenal one.  By lowering the memory ratio to 3x and lowering the multiplier ratio settings of our engineering sample chip to avoid the memory and CPU being the bottleneck, we were able to push the FSB speed to a surprising 145MHz without losing any stability.  This is 45% overclocking and we were very pleased with it. Since the Pentium 4’s bus is “quad pumped,” we are effectively running at a FSB of 580MHz.