One problem we have with testing mSATA SSDs is the fact that they require an mSATA to 2.5" adapter with a voltage regulator since 2.5" SATA is 5V whereas mSATA spec is rated at 3.3V. If you were to connect an mSATA SSD to a native mSATA slot, the power supply would automatically provide the drive with a voltage of 3.3V (SATA spec has three voltage rails: 3.3V, 5V and 12V) but because we have to deal with an adapter, the current we're measuring is based on the 5V rail (which the voltage regulator then changes to 3.3V). The voltage itself isn't the issue because it's fairly safe to assume that the adapter provides 3.3V to the drive but figuring out the difference between the input and output currents of the voltage regulator is. With the help of one of our readers (thanks Evan!), we were able to find out that the delta between input and output currents is typically 8mA (i.e. 0.008A) in the voltage regulator used in our adapter. Our measurements confirmed that as the adapter drew 8mA without a drive connected to it, although under load the regulator may draw a little more than that (datasheet claims a maximum of 20mA).

As we now know the difference between the input and output currents (current on 5V rail minus 8mA) as well as the voltage of the drive (3.3V), we're able to measure the actual power consumed by the drive. I've updated all mSATA SSD results to correspond with the change, so the number's you're seeing here are different from the ones you've seen in earlier reviews.

The EVO mSATA has great power characteristics, just like it's 2.5" sibling. There's no significant difference between the two and overall the EVO mSATA is one of the most power efficient mSATA drives. Unfortunately I don't have the necessary equipment to test slumber power consumption (HIPM+DIPM enabled) but I'd expect the EVO mSATA to have numbers similar to the 2.5" EVO (see the chart here).

The numbers here are worst-case scenarios and something I noticed during testing was that it takes a while for EVO to reach its maximum power draw. With the 500GB and 1TB models, the power draw was ranging between 2.2W and 2.5W for up to 30 seconds or so until it jumped to over 4W. I'm guessing this is due to TurboWrite because there is less NAND in use when the SLC buffer is employed (you simply don't need as many die to achieve high performance since program/erase times are much shorter). Once the buffer is full, the drive has to start writing to the TLC portion of the NAND, which increases the power draw as more NAND is in use. The downside is once you stop writing, the drive will keep drawing high power for a while in order to move the data from the SLC buffer to the TLC NAND. For example the 1TB model kept drawing ~3.5W for about a minute after I had stopped writing to the drive. I like Samsung's method because the garbage collection is done immediately instead of waiting for long idle periods like some manufacturers do -- doing garbage collection actively recovers performance quicker whereas it may take hours for idle garbage collection to kick in. 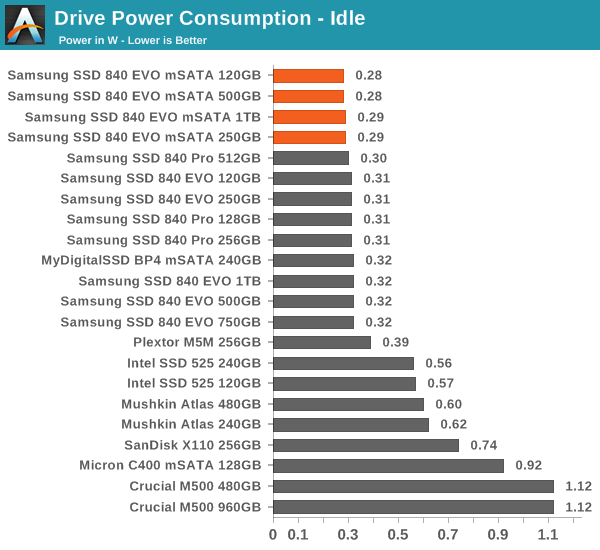 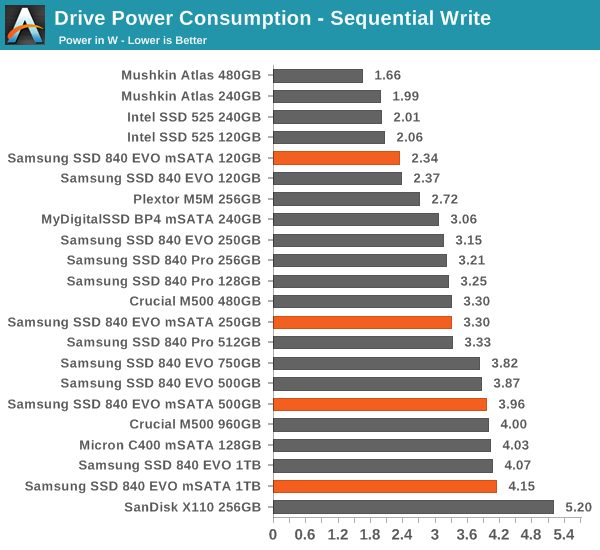 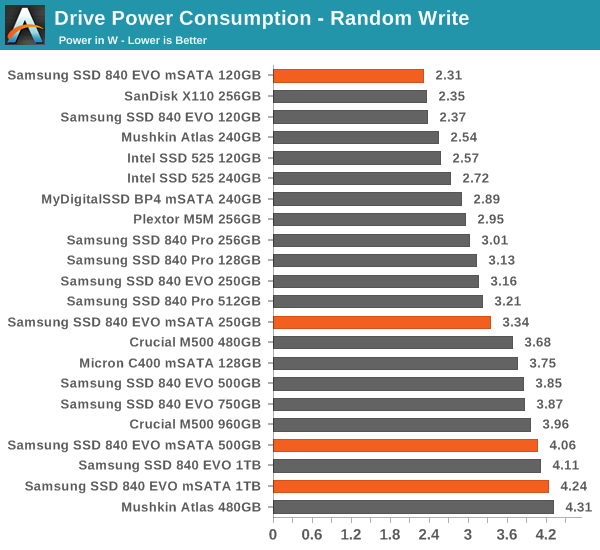