As mentioned previously, real world testing is where users should feel the benefits of spending more on memory.  A synthetic test exacerbates a specific type of loading to get peak results in terms of memory read/write and latency timings, most of which are not indicative of the pseudo random nature of real-world workloads (opening email, applying logic).  There are several situations which might fall under the typical scrutiny of a real world loading, such as video conversion/video editing.  It is at this point we consider if the CPU caches are too small and the system is relying on frequent memory accesses because the CPU cannot be fed with enough data.  It is these circumstances where memory speed is important, and it is all down to how the video converter is programmed rather than just a carte blanche on all video converters benefitting from memory.  As we will see in the IGP Compute section of this review, anything that can leverage the IGP cores can be a ripe candidate for increased memory speed.

Our tests in the CPU Real World section come from our motherboard reviews in order to emulate potential scenarios that a user may encounter.

We transfer a set size of files from the 120GB OCZ Vertex3 connected via SATA 6 Gbps on the motherboard to the 240 GB OCZ Vertex3 SSD with a SATA 6 Gbps to USB 3.0 converter via USB 3.0 using DiskBench, which monitors the time taken to transfer.  The files transferred are a 9.2 GB set of 7539 files across 1011 folders – 95% of these files are small typical website files, and the rest (90% of the size) are precompiled installers.  In an update to pre-Z87 testing, we also run MaxCPU to load up one of the threads during the test which improves general performance up to 15% by causing all the internal pathways to run at full speed.

Results are represented as seconds taken to complete the copy test, where lower is better. 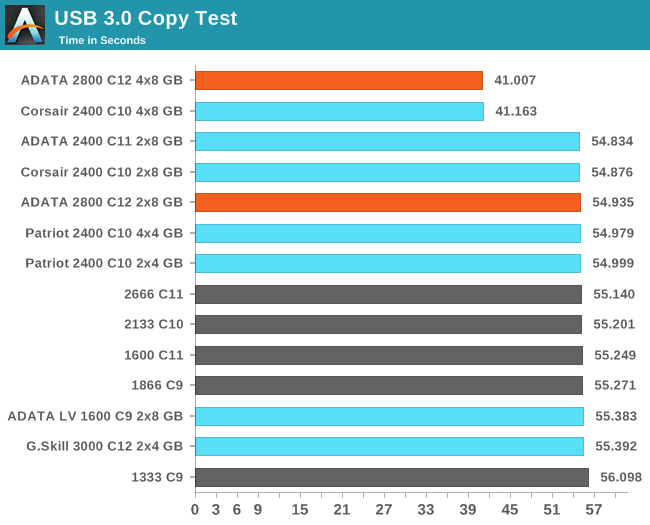 As mentioned in our Corsair 2400 C10 review, a USB data copy works significantly faster if all the data can be present in DRAM at once - for whatever reason the copy algorithm in Windows 7 uses up all the memory and then requires a refresh rather than performing bits of the copy from SSD -> DRAM asyncronously.  This is why a 32GB configuration in our test outperforms any 2x8 GB or 2x4 GB configuration.  Note that there is no real difference between 2x4 GB kits and 2x8 GB kits.

With 64-bit WinRAR, we compress the set of files used in the USB speed tests.  WinRAR x64 3.93 attempts to use multithreading when possible, and provides as a good test for when a system has variable threaded load.  WinRAR 4.2 does this a lot better!  If a system has multiple speeds to invoke at different loading, the switching between those speeds will determine how well the system will do. 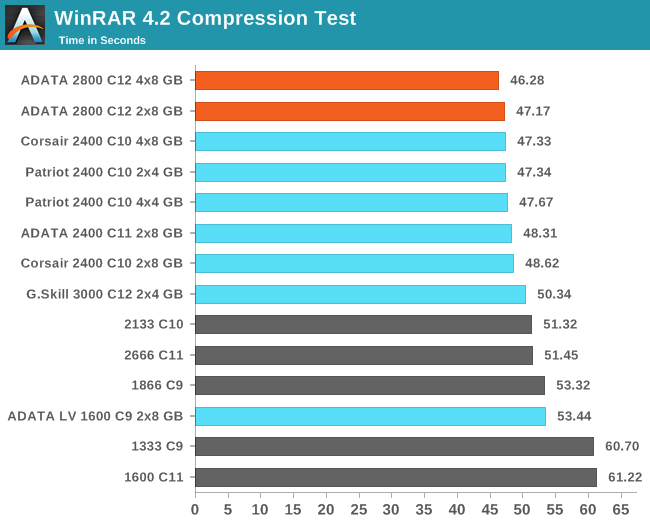 WinRAR is another benchmark that usually shows the benefit of a high end memory kit, and the ADATA gets the top results.  However, for the price difference to the Corsair or Patriot kits we have tested, I doubt that the difference would be financially viable for almost everyone.

FastStone Image Viewer is a free piece of software I have been using for quite a few years now.  It allows quick viewing of flat images, as well as resizing, changing color depth, adding simple text or simple filters.  It also has a bulk image conversion tool, which we use here.  The software currently operates only in single-thread mode, which should change in later versions of the software.  For this test, we convert a series of 170 files, of various resolutions, dimensions and types (of a total size of 163MB), all to the .gif format of 640x480 dimensions.  Results shown are in seconds, lower is better. 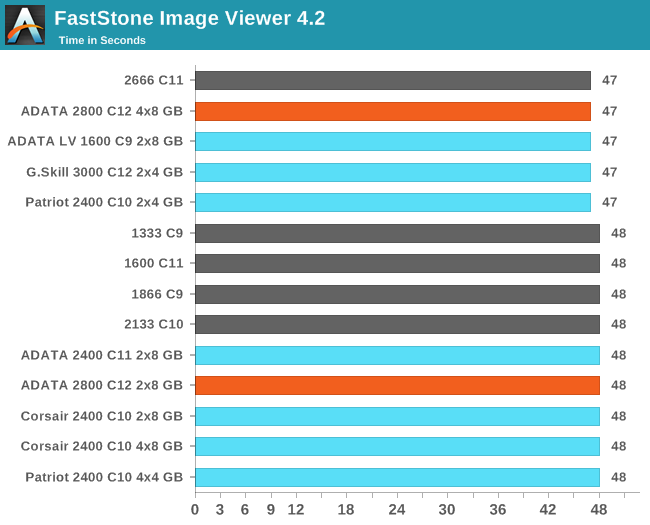 With XVC, users can convert any type of normal video to any compatible format for smartphones, tablets and other devices.  By default, it uses all available threads on the system, and in the presence of appropriate graphics cards, can utilize CUDA for NVIDIA GPUs as well as AMD WinAPP for AMD GPUs.  For this test, we use a set of 33 HD videos, each lasting 30 seconds, and convert them from 1080p to an iPod H.264 video format using just the CPU.  The time taken to convert these videos gives us our result in seconds, where lower is better. 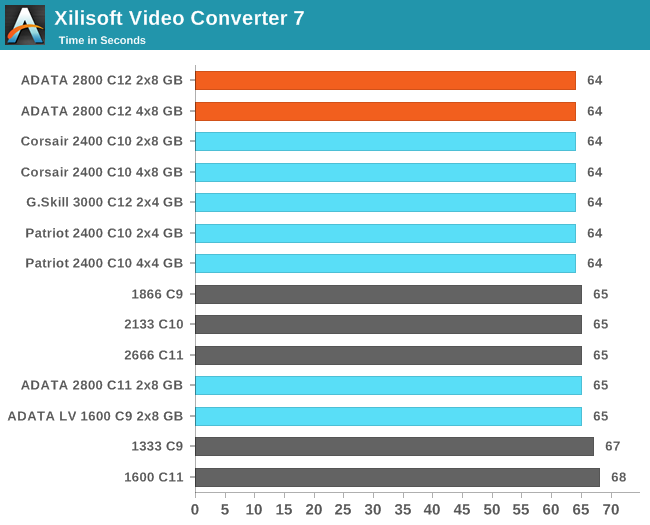 The x264 HD Benchmark uses a common HD encoding tool to process an HD MPEG2 source at 1280x720 at 3963 Kbps.  This test represents a standardized result which can be compared across other reviews, and is dependent on both CPU power and memory speed.  The benchmark performs a 2-pass encode, and the results shown are the average frame rate of each pass performed four times.  Higher is better this time around. 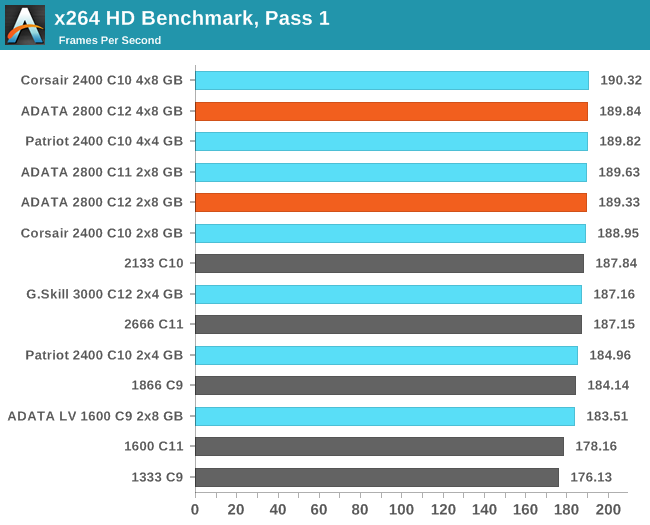 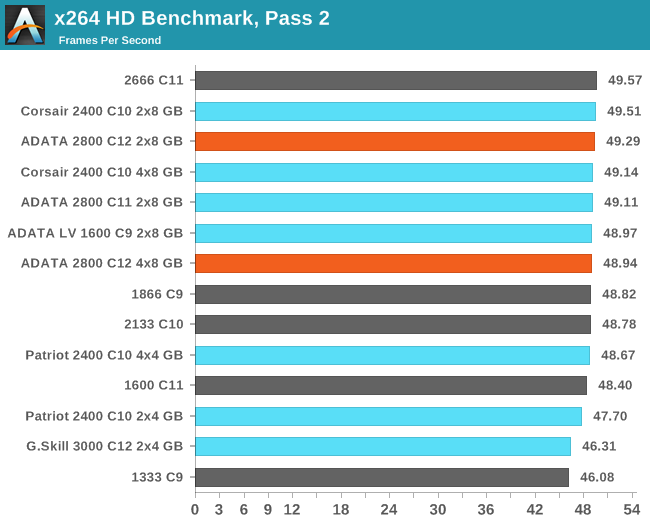 One of Anand’s common CPU benchmarks is TrueCrypt, a tool designed to encrypt data on a hard-drive using a variety of algorithms.  We take the program and run the benchmark mode using the fastest AES encryption protocol over a 1GB slice, calculating the speed in GB/s.  Higher is better. 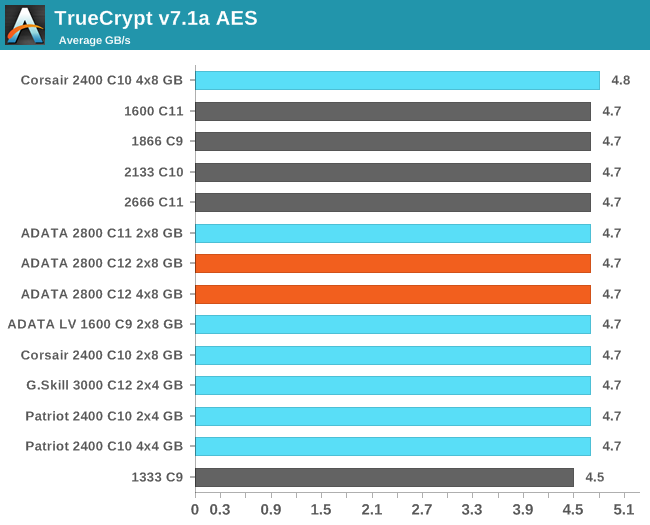