When I interviewed Jackson Hsu (Product Manager at GIGABYTE) at Computex this year, he explained that one of his proudest recent achievements was the sales figures for the Z87X-OC, with the first production run being sold out (to distributors) before launch.  I had a chance to play with the motherboard at the GIGABYTE OC Lab event after Computex for a couple of days, and was rather impressed at the level of functionality it offered for overclocking, as well as the twinning with the price.  Typically a motherboard that allows four-way CrossFire, an array of OC buttons, voltage read points and IR3553-type power phases is more expensive than $200.  I was eager to get this motherboard in for a critical analysis.

As far as running through the test suite, the Z87X-OC never missed a beat and went through our tests without a hitch.  The Z87X-OC implements a form of MultiCore Turbo giving maximum multiplier performance, ensuring it sits near the top of our benchmarks.  Overclocking options via the software, aside from manually using the OC buttons, typically supplied enough voltage for our i7-4770K sample, with a one menu option adjustment straight to 4.5 GHz.  In manual tweaking we were able to get 4.6 GHz stable (a limitation of our CPU) and even see 5.0 GHz using the OC buttons. 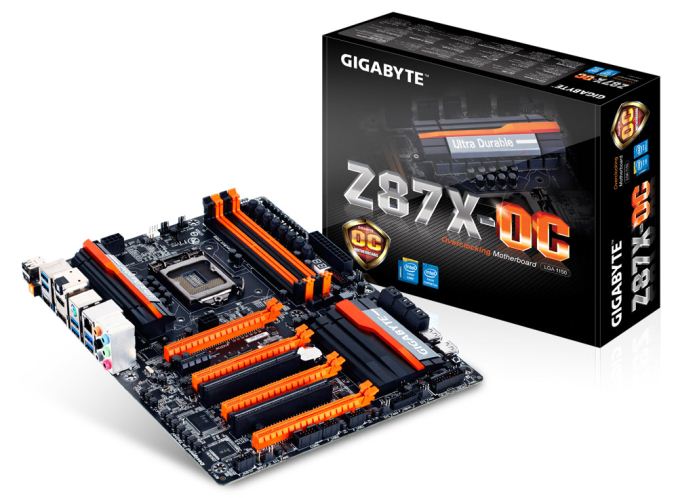 Aside from the copious orange, the most telling aspect of the Z87X-OC is the four full length PCIe slots.  Due to lane allocations, this gives the board a PCIe 3.0 x8/x4/x4 with PCIe 2.0 x4 coming from the chipset.  As SLI requires a minimum 8 lanes from the CPU (or a PLX), the OC is limited to two way SLI – as CrossFire does not have this limitation, four way CFX is possible.  It is rare to see four-way on a motherboard in this price bracket.

As this is a motherboard designed for overclockers, there are a range of features that in-home users might never be interested in.  First is the OC Brace, a formed bit of metal to help overclockers hold in graphics cards on open test beds.  I used this to good effect while testing and overclocking, although with the board in a case it doesn’t do much.  Next is the OC Touch buttons, which are useful for overclocking on the fly for records, but in a case they will not be used.  The OC Ignition button is designed to keep power supplied to the fans when the motherboard is turned off, which might have little use in a case again, although in hot climates it might be worth using this feature after a session in order to cool components quicker.  The USB ports near the SATA ports were designed for overclockers to not have to reach around to the Rear IO, but they have a secondary use more common in server systems – for software license dongles to be left inside the machine. 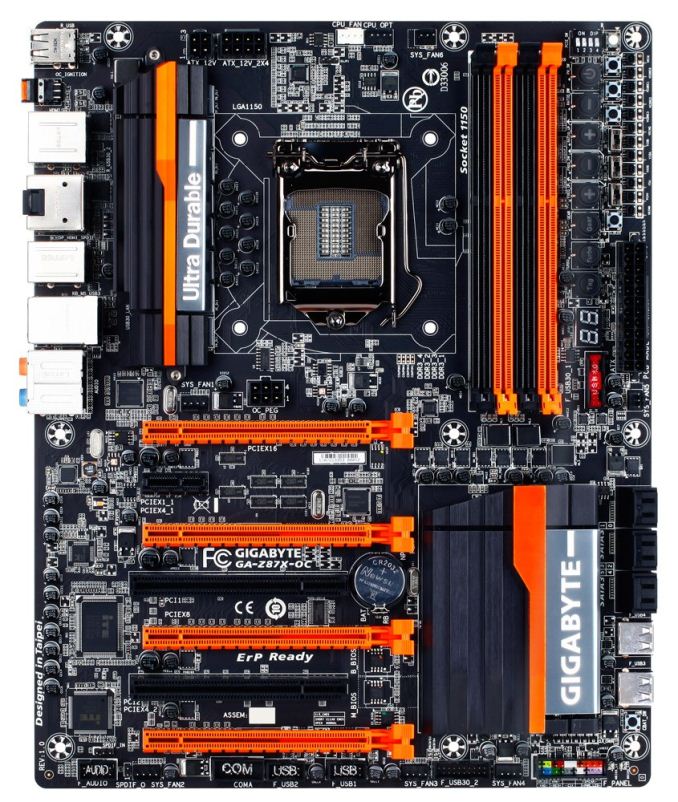 For home users/gamers, the Realtek ALC892 audio codec is easily bested (in spec) by other motherboards in this price range, and one of the compromises made by GIGABYTE to hit this price point.  Despite this, the Z87X-OC comes with IR3553 40A ICs and 60A chokes, both highly rated for their cool running, as well as a more expensive socket due to the high gold content (ensuring lower impedance and slower wear and tear).

There are a couple of issues worth mentioning – the Driver CD has to be reloaded to install software, Auto Tuning requires Flash to be installed, the BIOS seems a little jerky due to it being 30 Hz rather than 60 Hz and the new HD BIOS does not like the raft of 1440p monitors hitting the market.  There is also an incompatibility issue with a couple of Corsair power supplies – when using the early revision (2012, wk34) AX760i/AX860i PSUs, the motherboard may fail to turn on or in rare cases shutdown.  While both the motherboard and the PSU conform to 8-series specifications, the issue has been narrowed down to a signaling error between the two on the part of OC Ignition.  GIGABYTE has offered to fix motherboards via RMA, although the latest production should have the fix in place.
(Addendum: I have just been informed by the GIGABYTE AU rep that the boards on sale in Australia/NZ should already have the fix.  This means the rest of the world should be getting the stock in and if you get an older one it is more due to the seller's stock levels than anything else.)

Despite this minor teething problem with a new feature, the Z87X-OC is a competitive OC motherboard that offers more than just about any other on the market for its price.  For new extreme overclockers wanting to test overclocking features under sub-zero temperatures, GIGABYTE have you covered.  As a daily machine the Z87X-OC offers four-way CFX, an Intel NIC, eight fan headers, an extra USB 3.0 controller, onboard USB ports and IR3553 ICs for cooler operation.

The main comparison will be with the Z77 OC Formula of last generation (was $240), or the Z87M OC Formula ($190 at time of review).  The Z87X-OC is a worthy opponent, being a full sized motherboard for $200 with plenty of OC extras.  The Z87M OC Formula beats the GIGABYTE on the audio codec, making it perhaps more suitable perhaps for casual gaming use, although in our stock tests the Z87X-OC was often the frame rate winner, especially in multi-AMD GPUs.  So far in our Z87 testing, the Z87X-OC has been the overclocking motherboard to buy in the $200 bracket - the added features and functionality make the Z87X-OC suitable for extreme OC, as well as taking a number of top 10 results in the global OC rankings (1, 2, 3, 4, 5).  For users that have their own soundcard / RAID card and want tri-CFX, along with the inclusion of eight fan headers, could make the Z87X-OC into a nice home system as well.  One potential avenue for improvement would be to move up and include a combination air/water VRM cooler like the Z77 OC Formula did for a bit more. 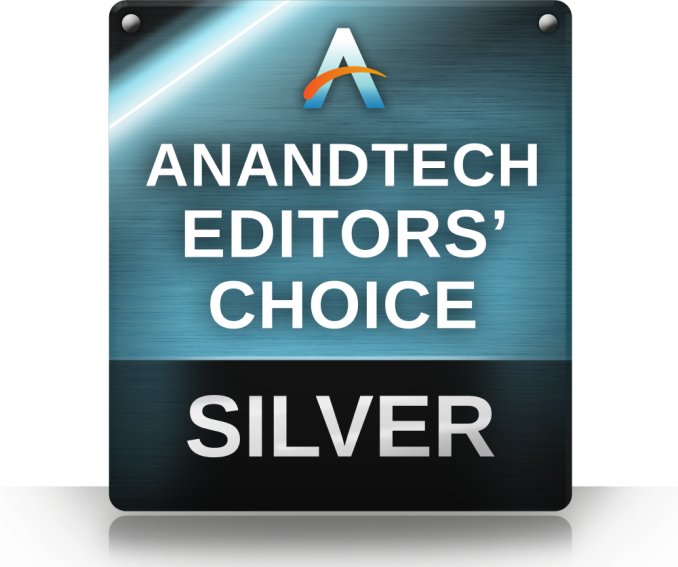