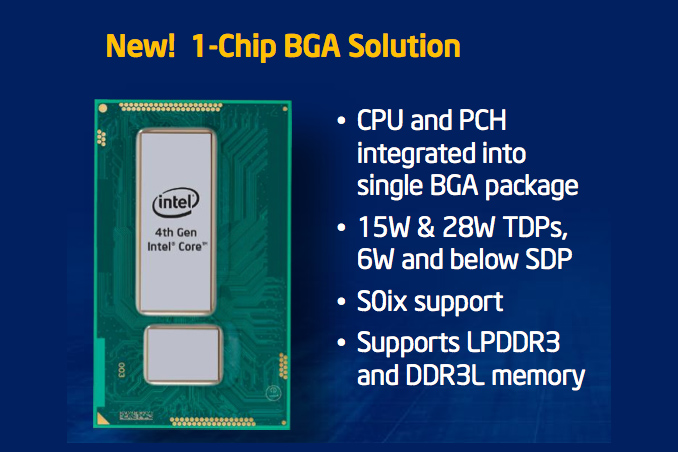 At the beginning of the year, Intel introduced the first 7W SDP Ivy Bridge parts in limited quantities with the promise that Haswell would bring even lower power options. We didn't see much OEM adoption of the 7W SDP IVB SKUs, but at the Haswell launch Intel made good on its promise to follow up with an even lower power version. The first Haswell Y-series parts carried a 6W SDP (and 11.5W TDP), and that value included the on-package PCH. Today Intel is announcing an even lower power version, once again in limited quantities. By the end of this year Haswell will be offered in a 4.5W SDP version (still 11.5W TDP).

I went through the SDP discussion earlier this year. But in short, Intel calculates TDP by looking at average power through a set of benchmarks that tend to include some of the worst case offenders on a desktop or notebook PC. The SDP thermal rating is specific only to Y-series parts and uses a lesser set of benchmarks, more appropriate for a thin tablet chassis, to determine average power. If you run Furmark on one of these parts and the OEM building the system does nothing to thermally manage the platform, it'll dissipate 11.5W. If you use it like a tablet, you should see 4.5W (or 6W depending on the SKU) as the average power dissipated. Realistically the 11.5W value can be boosted up to, but not sustained.

Moving from 6W SDP down to 4.5W SDP is a big deal because it enables something huge: fanless Haswell tablet designs. At 6W Intel recommends some sort of active cooling within the chassis, but at 4.5W it's possible to go completely fanless.

Earlier this week I pointed out that Haswell ULT finally got its platform power story in order, enabling ARM-like battery life on some light tablet workloads. The benefit to tossing Haswell into a tablet is the ability to have a greater dynamic range of performance than what's currently available from the ARM ecosystem. Great battery life when you're running tablet workloads, but the ability to get notebook-like performance when you need it as well.

Just because it's possible to get Haswell in a fanless tablet however, doesn't mean that it's going to happen. Uptake of the 7W SDP Ivy Bridge parts was pretty much non-existent from what I've seen. Intel's use of the phrase "limited volumes" gives us an indication that we shouldn't expect anything major here either. In my Haswell ULT tablet experiment I noted that although CPU power efficiency looked good, power consumption during video decode was pretty bad compared to what you can get from modern ARM SoCs.

The other thing worth thinking about is the total board area required by a Haswell implementation vs. effectively a high-end ARM smartphone SoC. Haswell may be capable of fitting into an iPad-like chassis, but can an OEM shrink the PCB enough to be a comparable size? If the answer is no (and I'm assuming that's the case given how much bigger the Haswell ULT/ULX package is than what you get from ARM), then a 4.5W SDP Haswell ULX based tablet would either have to be larger than an ARM equivalent or you'd get it with a smaller battery.

It's good to see Intel continuing to push its Core family of microprocessors down the power scale, but I feel like there's a lot more room for integration to happen before we can really speak about Core in the same breath as an ARM SoC. The good news is that some adventurous OEMs can likely build something iPad sized out of Haswell this year if they want to, but I'm still expecting the best attempts to come with Broadwell (with the exception of the Haswell Surface Pro of course, depending on what Microsoft decides to do).