Five years after its introduction, the MacBook Air really has grown into a very polished, mature platform. The 2013 model is really the epitome of what Apple set out to build back in 2008, we just finally have the right hardware available to realize the vision. Nearly every component has been perfectly selected. The chassis remains excellent. The keyboard and trackpad are non-issues. CPU performance is good for a mainstream PC and GPU performance is literally the highest you can offer in a 15W TDP. The SSD is no compromises, and Apple has implemented the fastest WiFi available as well. Only the display is beginning to show its age, not because it's substantially behind the similarly priced competition but because Apple has given us Retina Displays nearly everywhere else.

The MacBook Air's display really defines whether or not this notebook is for you. I suspect for most users it's fine. What you lose compared to the rMBP is a bit of color accuracy, more extreme vertical viewing angles and the ability to run at higher scaled resolutions. The perfect combination of portability and high display resolution for a workhorse remains the 13-inch rMBP in my opinion. If you don't need the resolution though, the MBA's weight/size really can't be beat. 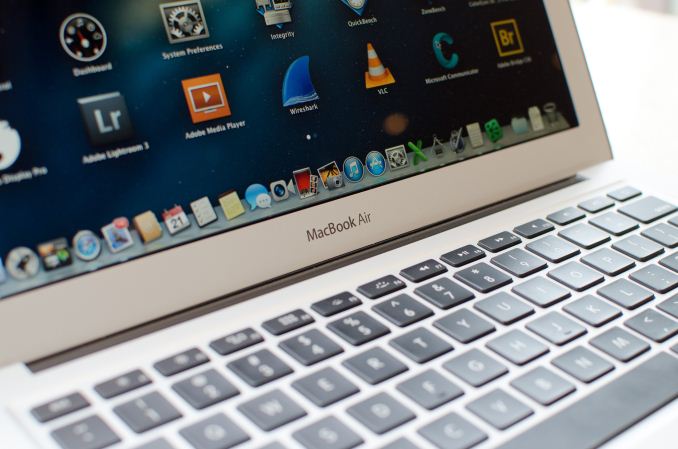 Rarely in these reviews do I get the chance to talk about OS X, but that really is such a big part of the experience here. OS X remains my work OS of choice and it's really evolved quite nicely. With the announcement of OS X Mavericks earlier this month, it's good to see continued improvements to the platform. That being said, I have noticed more bugs in Mac OS X over the past couple of releases; something I assume is related to an increased focus on iOS. Apple needs to be very careful here not to slip too much on the OS X front. Windows 8 may have gotten off to a rocky start, but I'm expecting things to only get better over the next couple of releases.

Quite possibly the most controversial aspect of the new MacBook Air is its CPU performance. Just as it has in the past, Apple made a conscious decision to forego improving CPU performance this generation in lieu of delivering better battery life, GPU performance and overall experience. MacBook Air pricing in 2013 either stayed the same as in 2012 or went down, but look at the laundry list of improvements: 802.11ac, PCIe SSD, and the largest dual-core Haswell die Intel offers. Intel's pricing on the CPU alone is 50% higher than the default i5 in last year's model. All of this comes at a cost: the 2013 MacBook Air ranges from just as quick as the 2012 model, to a bit slower, in CPU bound tasks. I wouldn't consider the degree of performance regression obviously noticeable, but it's there. Annual upgraders who demand a performance upgrade each time will have to opt for the admittedly reasonable $150 Core i7 CPU upgrade. This is only really an issue for those who upgrade anually though. Anyone using anything older than a 2012 MacBook Air will move not only to a faster CPU, but a much faster overall platform. Haswell continues to be an interesting performer. In some of our tests the 1.3GHz Core i5 couldn't keep up with last year's 1.7GHz part, while in others it was less than 2% off of the 2012 2.0GHz upgraded SKU. Haswell does boast higher IPC than Ivy Bridge, which when it surfaces can do more than make up for any differences in clock speed.

I'm glad to see Apple spend the extra money on Intel's HD 5000 across all of its MacBook Air CPUs. What's most interesting about Haswell GT3 in a 15W power envelope is just how hard the chip has to work in order to get added performance without running into thermal limits. In order to get a 15 - 30% increase in performance on the same process node, at a lower TDP, Intel had to more than double the size of the GPU. I don't think there's ever been such a perfect example of how power limited we are these days than looking at HD 5000 vs. HD 4000. Although the story at relatively unconstrained TDPs is one of multiple times better GPU performance than Ivy Bridge, in a chassis like the MacBook Air we're seeing gains that are far more modest. In terms of actual usefulness, the added performance of HD 5000 vs. HD 4000 is noticeable but don't expect it to dramatically change the type of titles that are playable on the MBA.

The move to 802.11ac feels like a game changer once more notebooks get there. The 2x2:2 implementation in the 2013 13-inch MacBook Air is capable of up to ~533Mbps if you're close to your 802.11ac AP. Speeds in immediately adjacent rooms should still top the rMBP's 3x3:3 802.11n implementation with peak rates well over 300Mbps. Anyone looking to splurge and move to a full blown 802.11ac setup with the 2013 MacBook Air should hold off though - OS X doesn't presently support 802.11ac transfer speeds over AFP/SMB shares. I'm expecting we'll see an OS X update in short order here to address the issues I found but until then you'll be limited to 802.11n speeds for copying files over your new 802.11ac network.

I'm very pleased with Apple's PCIe SSD, at least based on Samsung's new PCIe controller. Sequential performance is up considerably over last year's 6Gbps SATA drive. Go back any further and the difference will be like night and day, especially if you were one of the unfortunate few with an older Toshiba drive. Internal transfers are quicker, but to actually use the new SSD to its potential you'll really need a very fast external Thunderbolt array - even USB 3.0 can't completely tax it. There's still a lot more investigating that I want to do on Samsung's new controller, but my early results look very promising. It's sort of crazy that Apple now ships a mainstream consumer notebook with a PCIe SSD capable of almost 800MB/s. Now that Apple is off SATA, scaling storage performance should be much easier to do going forward. 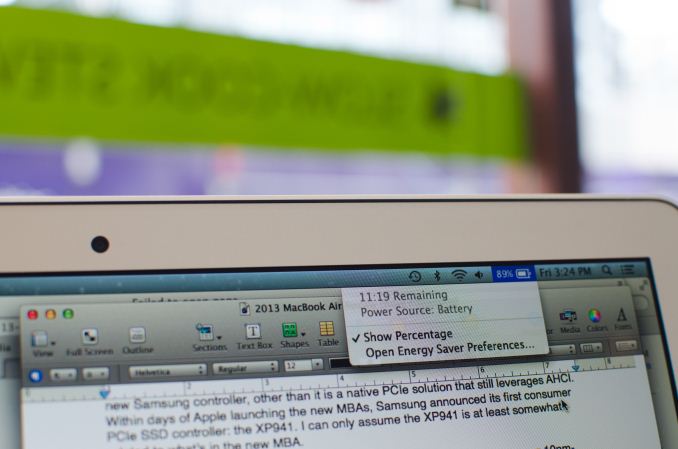 The increase in battery life is intoxicating. For light work, I'm so much less worried about running out of power during the day on the new 13-inch MacBook Air. As a writer's aid, the new MBA's battery life is perfect. Last year I spoke about blurring lines within Apple's MacBook lineup, but now I'm beginning to see those lines blur between MacBook Air and iPad...

Once you start diving into heavy photo and/or video work, the difference between generations shrinks quite a bit. I can't stress enough how important it is that you pay attention to Apple's wording in its battery life estimates. Up to 12 hours is just that, a maximum. It's all about matching the notebook to your usage model. It's through exploiting periods of platform idle time that Haswell ULT and the MacBook Air can hit its lofty battery life claims. Until OS X Mavericks arrives, you'll have to make sure to pay attention to things like background web browser tabs running Flash from killing your battery life.

Can I also add that I'm beyond excited for the new 13-inch rMBP? If Apple indeed is using Intel's 28W Haswell ULT part (with on-package PCH), we might really get the best of both worlds with that notebook - incredible battery life and a Retina Display. Admittedly I do fall into more of the pro user category. For its customers looking for a good, mainstream notebook PC, the new MacBook Air is really quite awesome. Even I'm tempted by the machine thanks to its battery life alone. If I didn't feel like we were a few months away from an rMBP update and wasn't so hell-bent on sticking with a single machine as my notebook and desktop, I'd probably cozy up to a new 13-inch MacBook Air.