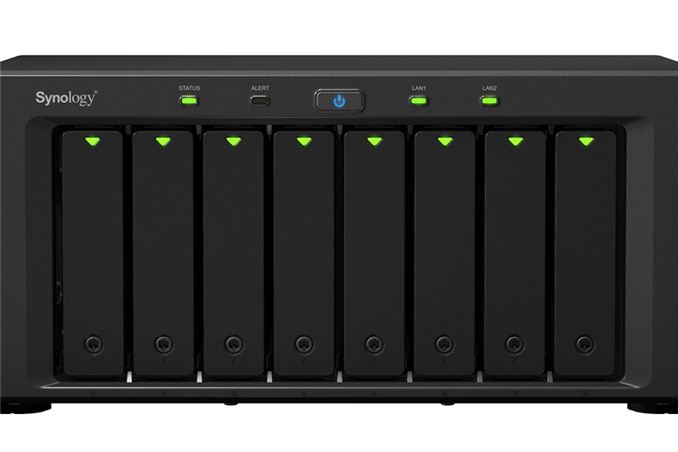 A number of Intel Atom D27xx-based NAS systems have been evaluated in our labs, even though we formally reviewed only one earlier this year, the LaCie 5big NAS Pro. The Thecus N4800 has made its appearance in a some benchmarks presented in our SMB / SOHO NAS testbed article. Synology is one of the well respected vendors in the SMB / SOHO NAS space, and we have reviewed a number of units from them in the previous years. They recently refreshed their 8-bay SMB / SOHO NAS lineup with the DS1813+. Based on the same platform as the DS1812+ (Atom D2700), it added two extra network ports. However, due to the similarity in the underlying platform, the performance can be expected to be similar to last year's version (except when all four links are teamed together when compared to dual teaming), the DS1812+. The Synology DS1812+, a 8-bay desktop tower form factor offering, has been under stress in our labs since the beginning of this year.

In our experience with Synology NAS units, we have found that they typically manage to tick all the right boxes for the perfect consumer NAS (except for the pricing factor). Does the DS1812+ carry things forward, or do we have something to complain about?

The specifications of the Synology DS1812+ are provided below:

In the rest of the review, I will cover some unboxing and setup impressions. A detailed description of the testbed setup and testing methodology is followed by performance numbers in both single and multi-client modes. As requested by multiple readers, we will also briefly cover performance with encryption enabled. In the final section, power consumption numbers as well as RAID rebuild times will be covered along with some closing notes.