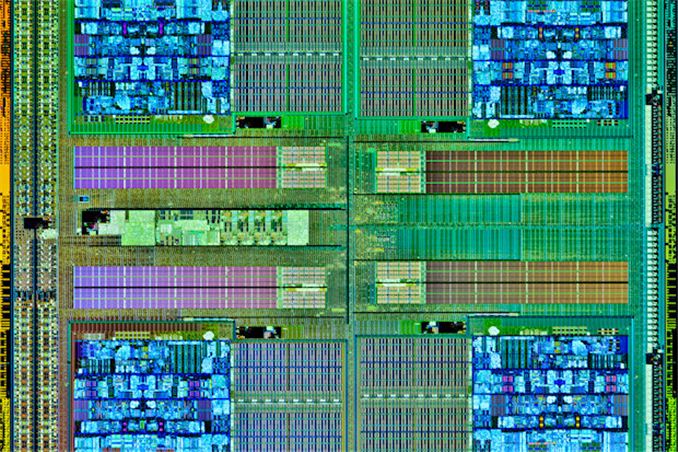 Today at E3 AMD announced their latest CPUs, the FX-9590 and FX-9370. Similar to what we’re seeing with Richland vs. Trinity, AMD is incrementing the series number to 9000 while sticking with the existing Piledriver Vishera architecture. These chips are the result of tuning and binning on GlobalFoundries’ 32nm SOI process, though the latest jump from the existing FX-8350 is nonetheless quite impressive.

The FX-8350 had a base clock of 4.0GHz with a maximum Turbo Core clock of 4.2GHz; the FX-9590 in contrast has a maximum Turbo clock of 5GHz and the FX-9370 tops out at 4.7GHz. We’ve asked AMD for details on the base clocks for the new parts, but so far have not yet received a response; we're also missing details on TDP, cache size, etc. but those will likely be the same as the FX-8350/8320 (at least for everything but TDP).

6/13/2013 Update: We have now received the most important pieces of information from AMD regarding the new parts. The base clock on the FX-9590 will be 4.7GHz and the base clock of the FX-9370 will be 4.4GHz, so in both cases it will be 300MHz below the maximum Turbo Core speed. The more critical factor is also the more alarming aspect: the rumors of a 220W TDP have proven true. That explains why these parts will target system integrators first, and the FX-9000 series also earns the distinction of having a higher TDP, but it also raises some serious concerns. With proper cooling, there's little doubt that you can run a Vishera core at 5.0GHz for extended periods of time, but 220W is a massive amount of power to draw for just a CPU.

To put things in perspective, the highest TDP part ever released by AMD prior to the FX-9000 series is the 140W TDP Phenom II X4 965 BE. For Intel, the vast majority of their chips have been under 130W, but a few  chips (e.g. Core 2 Extreme QX9775, Core i7-3970X, and most of the Xeon 7100 series PPGA604 parts back at the end of the NetBurst era) managed to go above and beyond and hit 150W TDPs. So we're basically looking at a 76% increase in TDP relative to the FX-8350 to get a 19% increase in maximum clock speed. It's difficult to imagine the target market for such a chip, but perhaps a few of the system integrators expressed interest in a manufacturer-overclocked CPU.

For those who remember the halcyon days of the NetBurst vs. Sledgehammer Wars, the irony of AMD pimping the “first commercially available 5GHz CPU” can be a bit hard to take. Yes, all other things being equal (cache sizes, latency, pipeline depth, power use, etc., etc…), having a higher core clock will result in better performance. The stark reality is that all other things are almost never “equal”, however, which means pushing clocks to 5GHz will improve performance over the existing FX-8000 parts but clock speed alone isn’t enough. AMD continues to work on their next generation architecture, Steamroller, which will debut later this year in the Kaveri APUs as a 28nm part, but in the interim we have to make do with the existing parts.

As we covered extensively last week, Intel has just launched their latest Haswell processors, and on the desktop we’re seeing relatively small performance gains. That’s somewhat interesting as this is a “Tock” in Intel’s Tick-Tock cadence, which means a new architecture and that usually means improved performance. However, similar to the last Tock (Sandy Bridge), Haswell is more of a mobile-focused architecture, which means performance gains on the CPU are minor but power and battery life gains can be significant, especially in lighter workloads. Also similar to the “Tock” when we moved from Clarkdale to Sandy Bridge, the jump in graphics performance with the HD 5000 series parts (and even more so with the Iris and Iris Pro parts) can be quite large relative to Ivy Bridge.

So Intel has been relatively tame on the CPU performance increases this time around and for they’ve focused on reducing typical power use and improving graphics. Meanwhile AMD’s answer on their high-end desktop platforms is…more clock speed. We’ll have full reviews of the new parts in the future, as the new CPUs are not yet available, but given the ability of Vishera to overclock quite easily to the 4.8-5.2GHz range on air-cooling (and 8GHz+ with exotic overclocking methods!) the higher Turbo Core speeds were inevitable.

We could also talk model numbers and question the need to increment from the 8000 series to the 9000 series when nothing has really changed this time around—the more sensible time to make that jump should have been when Vishera first launched, at least from the technology side of things. It would also be nice to see more of a unification of model numbers in AMD’s product stack, as we currently have FX-4000, FX-6000, FX-8000, and now FX-9000 parts all built on the Zambezi/Bulldozer and Vishera/Piledriver architectures. FX-4000 (two modules/four cores), FX-6000 (three modules/six cores), and FX-8000 (four modules/eight cores) made sense, but FX-9000 breaks that pattern. At present there are no updates being announced for the FX-4000 and FX-6000 families, but those will likely come. Will they be FX-5000 and FX-7000 parts now, or will they remain 4000/6000? If AMD were to use an Intel-style naming convention, Bulldozer was 1st Generation, Piledriver is 2nd Generation, and ahead we still have Steamroller (3rd Generation) and Excavator (4th Generation), but they’ve chosen a different route.

Whatever the name of the part, more than ever it’s important to know what you’re actually getting in terms of hardware before making a purchase—that holds true for AMD CPUs, APUs, and GPUs, but it also applies to Intel’s CPUs and NVIDIA’s GPUs, never mind the variety of ARM SoCs out there. The FX-9000 series is now AMD’s highest performance four module/eight core processor for their AM3+ platform, but it’s an incremental improvement from the FX-8000 series in the same way that the Radeon HD 8000 series is an incremental improvement on the HD 7000 GCN offerings. At least on the AMD CPU side of things we can generally go by the “higher numbers are better” idea, but that won’t always be the case.

AMD did not reveal pricing details on the new parts, and the press release says these new CPUs will “be available initially in PCs through system integrators”. They may replace the existing FX-8350 and FX-8320 eventually, but they will initially launch at a higher price depending on how AMD and their partners feel they stack up against the competition.