That raised an interesting question: is DDR really necessary for today’s applications?  There is no doubt DDR can have a very bright future, but with the price of DDR memory being much more than PC133 SDRAM, the migration to DDR seems to require too great of an investment for now.

This makes the KT133A chipset a very attractive option.  You can stick with your PC133 SDRAM for a little longer while lowering the clock multiplier of you Athlon to take advantage of the 133MHz FSB for an instant performance boost without a new CPU (e.g. 7.5 x 133 instead of 10 x 100).  Considering that most KT133A motherboards will be retailing for $140 US this is a very attractive option.

This is exactly why so many manufacturers are concentrating on releasing KT133A based solutions.  Provided that they already have a solid KT133 motherboard design, producing a KT133A solution often requires little more than a few design tweaks and a drop in of the pin-compatible 8363A North Bridge.

Quite a few KT133A motherboards have arrived at the AnandTech Labs, and as usual, we will walk you through all of them and let you know which one is the best.  Our first candidate happens to be based on one of our old favorites, the ABIT KT7-RAID, which proudly took our Editor’s Choice Gold Award in our first Socket-A motherboard roundup back in August.  We loved the board for its impressive performance and overclocking ability.

ABIT is back, with a modification to their very popular KT7-RAID design.  This time with the new VIA KT133A chipset and some very familiar features, they bring us the KT7A-RAID.

This is the KT7-RAID right?

As we have mentioned several times, the migration from the KT133 to the KT133A chipset is a relatively easy job for motherboard manufacturers.  The new VT8363A North Bridge is pin compatible with the old VT8363, and even the new VIA 686B South Bridge is pin compatible with the old 686A South Bridge.  So theoretically manufacturers just need to put in the new chips on their old KT133 design and they have a ‘new’ KT133A solution. 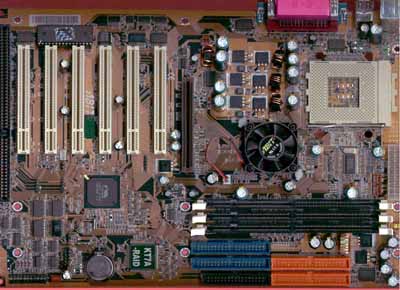 Realistically, manufacturers will also have to make sure that their board design can work at the increased FSB.  Keep in mind that the EV6 bus is a DDR bus meaning that a 33MHz increase in FSB frequency to 133MHz is effectively an increase of 66MHz.  Provided that a manufacturer’s KT133 design was solid, it shouldn’t require too much effort to move to a KT133A based motherboard.

Looking at the KT7A-RAID, it’s just what we expected.  It looks pretty much the same as the old KT7-RAID, with some minor changes in the choice of components.  One special thing about the ABIT KT7 series was the HSF (heatsink/fan) unit on the VT8363 North Bridge.  Recall from our experience during the KT133 era, most manufacturers just put heatsinks on the 8363 North Bridge, while ABIT was the only manufacturer that put a complete HSF unit on the North Bridge.  We have discussed before that with KT133 chipset neither the heat sink nor the fan is necessary for the North Bridge, even though the chip gets relatively hot during heavy usage.  It turns out that with the new KT133A North Bridge, the situation gets quite interesting, but we’ll save that discussion for later on in the review.