We've covered the general performance and some synthetic graphics tests. What about actual games? Well, here’s what our (admittedly punishing) 2013 gaming suite looks like on Kabini. These are the "Value" results, as the "Mainstream" and "Enthusiast" settings are unplayable on anything without a dGPU (though those results are available in Mobile Bench if you're interested). 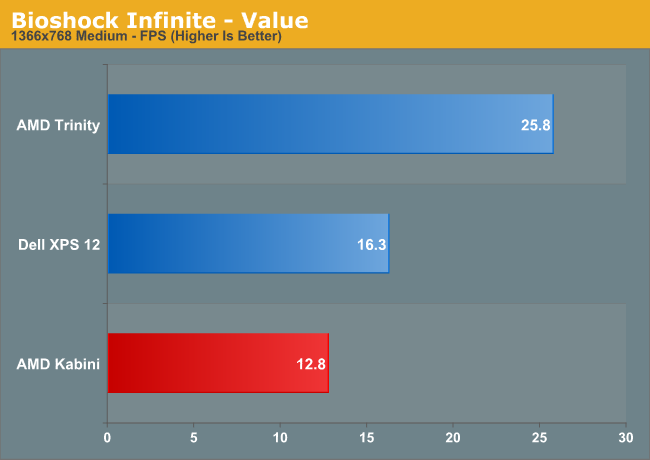 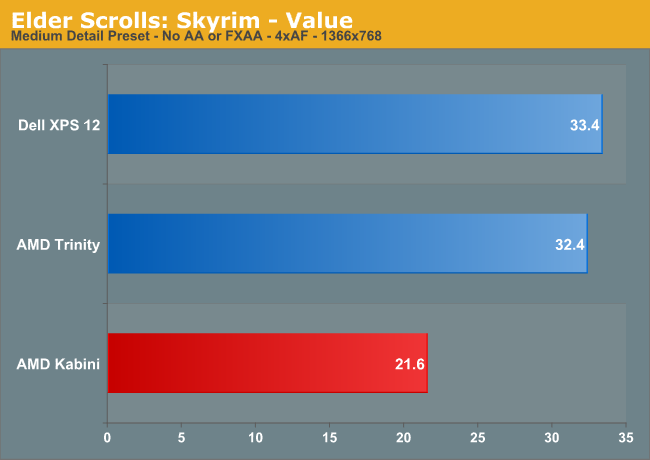 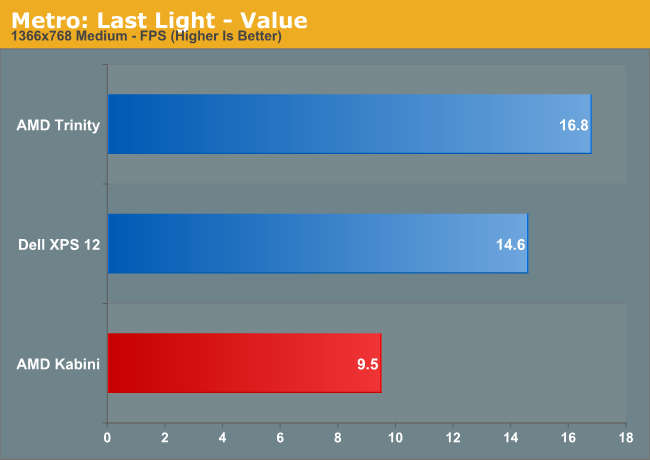 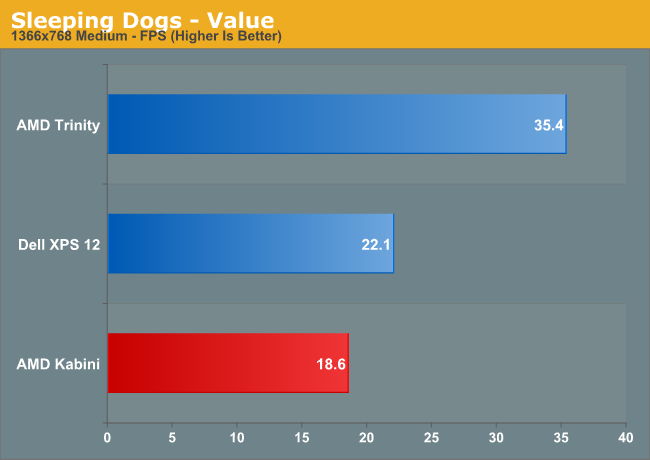 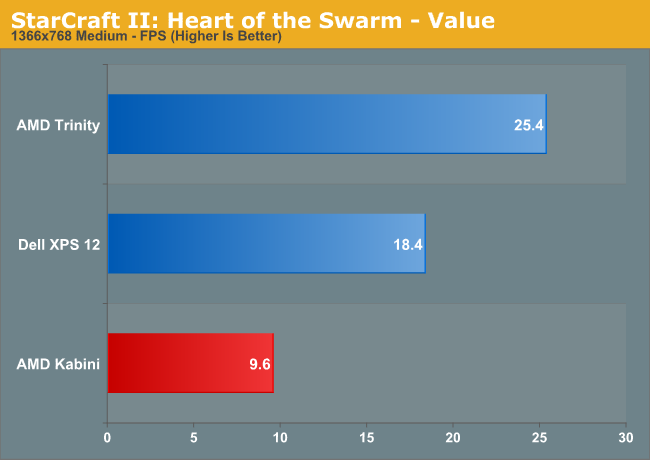 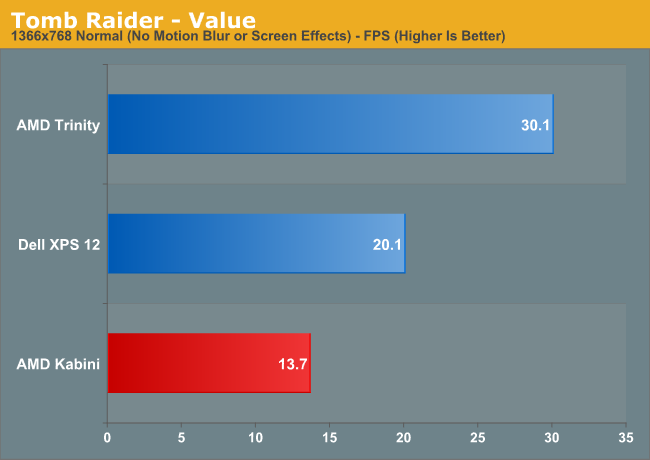 The short summary is that not a single game manages to crest the 30FPS mark, and I even ran additional tests at the minimum quality settings (at 1366x768) to see if I could improve the results. Sadly, I couldn’t, at least not enough to make the games playable; the best I managed was around 25 FPS in Bioshock, Skyrim, and Tomb Raider at minimum detail, and most titles remained in the sub-20 FPS range. Titles that tend to be more taxing on the CPU side of things like StarCraft II are even worse, with frame rates in StarCraft II being half of what IVB ULV gets at our Value (medium quality minus antialiasing) preset. 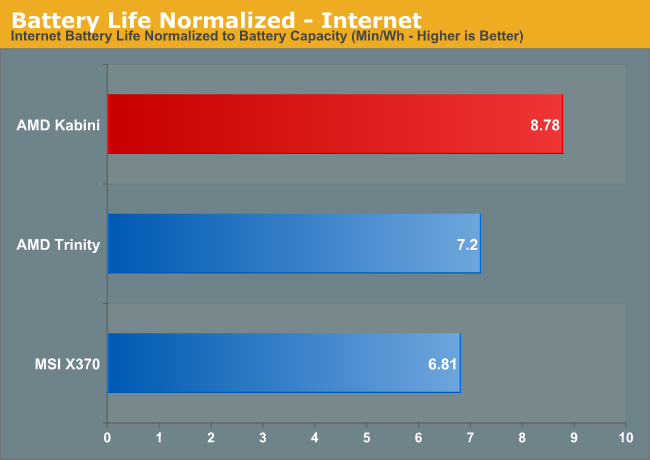 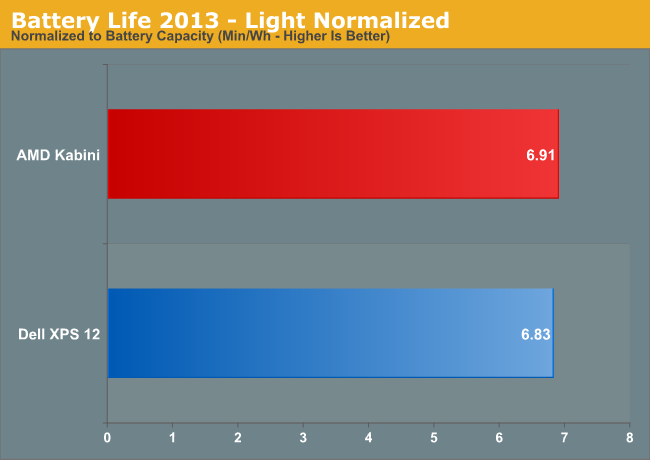 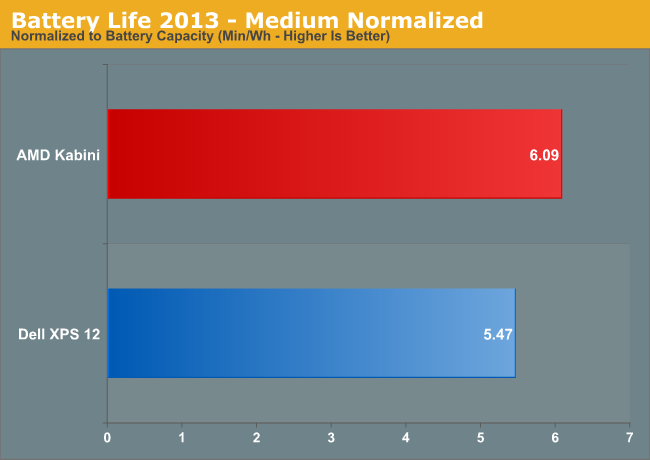 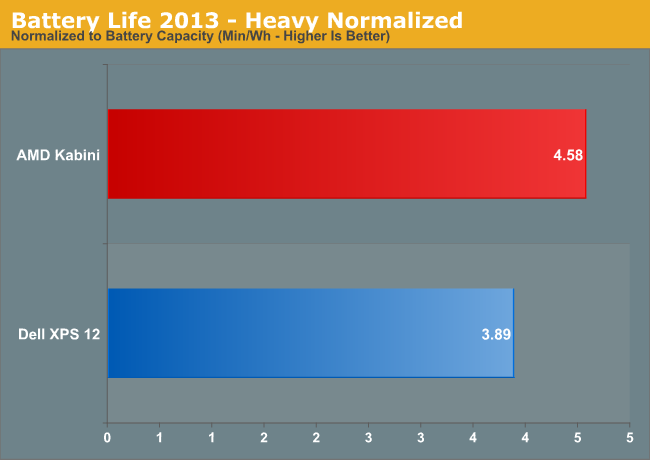 The good news is that not only is Kabini noticeably faster than Brazos, but it’s also mighty frugal when it comes to power use. We don’t have any Brazos laptops handy, so we had to use our older Internet battery life test as a comparison point (100 nits instead of 200 nits); in that test, Kabini topped 6.5 hours with a 45Wh battery. The MSI X370 we’re using as a comparison point did last a bit longer, but it also has a 64Wh battery. In terms of normalized power use, the Kabini laptop ends up being 29% more efficient, and that’s with a 14” AHVA 1080p panel going up against a 13.3” TN 768p display. We’re not quite able to compare apples to apples, but Kabini definitely looks like a good improvement over Brazos in power use.

The power story is even better when we look at ULV Ivy Bridge and standard Trinity APUs. Using our new battery life tests, which push the hardware a lot harder than our previous tests, Kabini delivers normalized battery life that’s at least equal to IVB ULV (our “Light” test), and in the more taxing Medium and Heavy tests Kabini beats ULV by 11% and 18%, respectively. Of course the IVB ULV system is still faster, and it’s also likely to cost twice what we expect Kabini laptops to sell for, but lower cost Celeron and Pentium ULV parts shouldn't be all that different. Also of note is that we don’t know yet how Haswell will fare in these same tests, but that’s an area Intel seems to be focusing on for their next CPU; that’s a story for next month….