Software: GeForce Experience, Out of Beta

Along with the launch of the GTX 780 hardware, NVIDIA is also using this opportunity to announce and roll out new software. Though they are (and always will be) fundamentally a hardware company, NVIDIA has been finding that software is increasingly important to the sales of their products. As a result the company has taken on several software initiatives over the years, both on the consumer side and the business side. To that end the products launching today are essentially a spearhead as part of a larger NVIDIA software ecosystem. 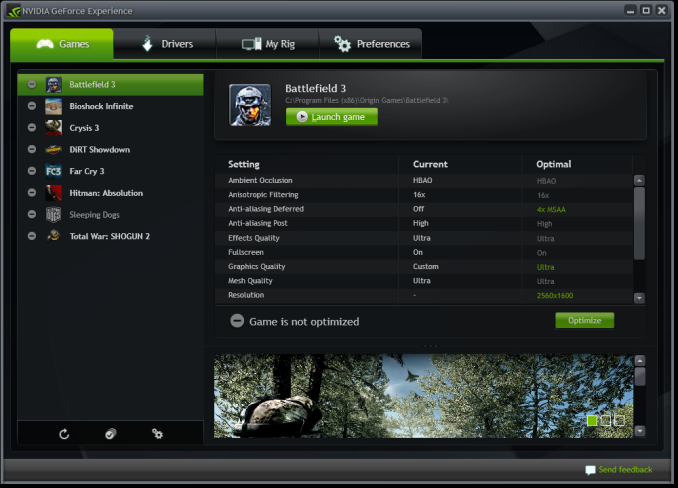 So what is GeForce Experience? GFE is in a nutshell NVIDIA’s game settings advisor. The concept itself is not new, as games have auto-detected hardware and tried to set appropriate settings, and even NVIDIA has toyed with the concept before with their Optimal Playable Settings (OPS) service. The difference between those implementations and GFE comes down to who’s doing the work of figuring this out, and how much work is being done.

With OPS NVIDIA was essentially writing out recommended settings by hand based on human play testing. That process is of course slow, making it hard to cover a wide range of hardware and to get settings out for new games in a timely manner. Meanwhile with auto-detection built-in to games the quality of the recommendations is not a particular issue, but most games based their automatic settings around a list of profiles, which means most built-in auto-detection routines were fouled up by newer hardware. Simply put, it doesn’t do NVIDIA any good if a graphical showcase game like Crysis 3 selects the lowest quality settings because it doesn’t know what a GTX 780 is.

NVIDIA’s solution of choice is to take on most of this work themselves, and then move virtually all of it to automation. From a business perspective this makes great sense for NVIDIA as they already have the critical component for such a service, the hardware. NVIDIA already operates large GPU farms in order to test drivers, a process that isn’t all that different from what they would need to do to automate the search for optimal settings. Rather than regression testing and looking for errors, NVIDIA’s GPU farms can iterate through various settings on various GPUs in order to find the best combination of settings that can reach a playable level of performance. 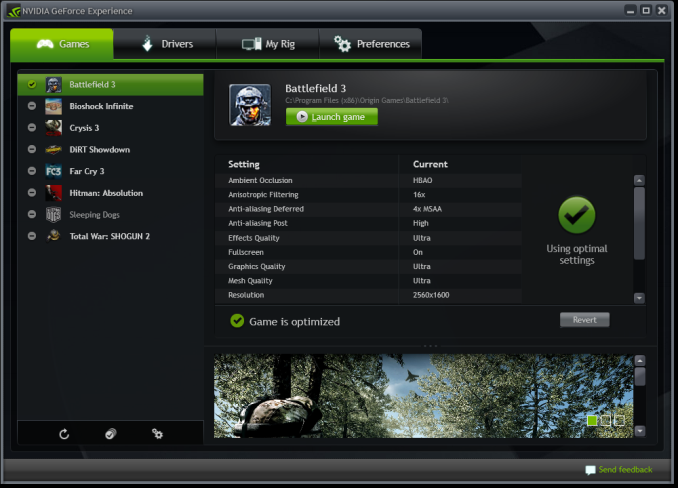 By iterating through the massive matrix of settings most games offer, NVIDIA’s GPU farms can do most of the work required. What’s left for humans is writing test cases for new games, something again necessary for driver/regression testing, and then identifying which settings are more desirable from a quality perspective so that those can be weighted and scored in the benchmarking process. This means that it’s not entirely a human-free experience, but having a handful of engineers writing test cases and assigning weights is a much more productive use of time than having humans test everything by hand like it was for OPS.

Moving on, all of this feeds into NVIDIA’s GFE backend service, which in turn feeds the frontend in the form of the GFE client. The GFE client has a number of features (which we’ll get into in a moment), but for the purposes of GFE its primary role is to find games on a user’s computer, pull optimal settings from NVIDIA, and then apply those settings as necessary. All of this is done through a relatively straightforward UI, which lists the detected games, the games’ current settings, and NVIDIA’s suggested settings.

The big question of course is whether GFE’s settings are any good, and in short the answer is yes. NVIDIA’s settings are overall reasonable, and more often than not have closely matched the settings we use for benchmarking. I’ve noticed that they do have a preference for FXAA and other pseudo-AA modes over real AA modes like MSAA, but at this point that’s probably a losing battle on my part given the performance hit of MSAA.

For casual users NVIDIA is expecting this to be a one-stop solution. Casual users will let GFE go with whatever it thinks are the best settings, and as long as NVIDIA has done their profiling right users will get the best mix of quality at an appropriate framerate. For power users on the other hand the expectation isn’t necessarily that those users will stick with GFE’s recommended settings, but rather GFE will provide a solid baseline to work from. Rather than diving into a new game blindly, power users can start with GFE’s recommended settings and then turn things down if the performance isn’t quite high enough, or adjust some settings for others if they favor a different tradeoff in quality. On a personal note this exactly matches what I’ve been using GFE for since the earlier betas landed in our hands, so it seems like NVIDIA is on the mark when it comes to power users. 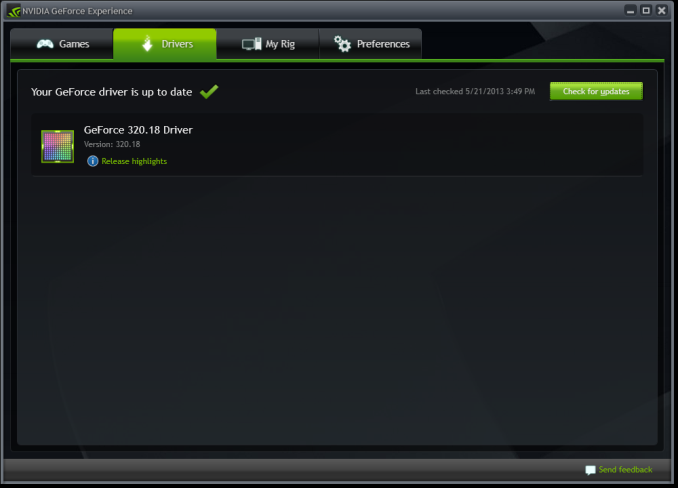 With all of that said, GeForce Experience isn’t going to be a stand-alone game optimization product but rather the start of a larger software suite for consumers. GeForce Experience has already absorbed the NVIDIA Update functionality that previously existed as a small optional install in NVIDIA’s drivers. It’s from here that NVIDIA is going to be building further software products for GeForce users.

The first of these expansions will be for SHIELD, NVIDIA’s handheld game console launching next month. One of SHIELD’s major features is the ability to stream PC games to the console, which in turn requires a utility running on the host PC to provide the SHIELD interface, control mapping, and of course video encoding and streaming. Rather than roll that out as a separate utility, that functionality will be built into future versions of GeForce Experience.

To that end, with the next release of drivers for the GTX 780 GeForce Experience will be bundled with NVIDIA’s drivers, similar to how NVIDIA Update is today. Like NVIDIA Update it will be an optional-but-default item, so users can opt out of it, but if the adoption is anything like NVIDIA Update then the expectation is that most users will end up installing GFE.

It would be remiss of us to not point out the potential for bloat here, but we’ll have to see how this plays out. In terms of file size GeForce Experience is rather tiny at 11MB (versus 169MB for the 320.14 driver package), so after installer overhead is accounted for it should add very little to the size of the GeForce driver package. Similarly it doesn’t seem to have any real appetite for system resources, but this is the wildcard since it’s subject to change as NVIDIA adds more functionality to the client.