Samsung is shipping its own cloud based translation app on the Galaxy S 4 called S Translator. Chinese, English (US/UK), French, German, Italian, Japanese, Korean, Portuguese and Spanish languages are all supported at launch.

You can type or speak sentences to be translated and either read the translation or have your phone speak it. This functionality has been enabled by Google Translate for a while now, but turning it into a feature and making it very obvious on the Galaxy S 4 is a clear attempt to hit a broader audience. 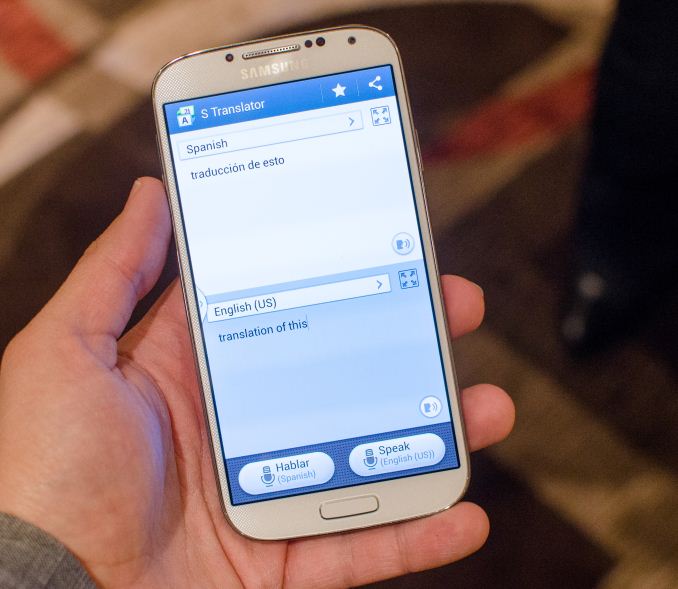 Based on my limited experience with the translation, it seems like the bulk of the work is being done in the cloud. Samsung isn’t announcing what partner it’s using to do the actual translation at this point.

S Translator is also supported in the Email and ChatON apps.

The Galaxy S 4 supports wireless streaming of music to up to 8 other SGS4 devices with a feature called Group Play. What Group Play does is allows you to wirelessly tether multiple SGS4s together to all play the exact same song. The idea is to leverage multiple devices to fill a room up with audio.

It’s not clear what application/DRM limitations exist here, but I can see this being the new tap-to-share for encouraging groups of friends to all buy Galaxy S 4s.

Through some clever tuning of the capacitive touch stack, the Galaxy S 4 is able to sense the presence of your finger up to about a centimeter away from the display. Air View works in Samsung’s web browser as a magnifying lens or to trigger a preview of open tabs. It also works in the email and gallery apps as well. Update: You can also use the SGS4 with gloves on, similar to Nokia's Lumia 920.

The Galaxy S 4 also supports Air Gesture, which leverages the IR gesture sensor to enable large hand gestures for UI control. You can swipe your hand in front of the smartphone to switch songs, move between tabs in the web browser, or scroll up and down a web page. You can also use Air Gesture to answer a call, which Samsung views as a good solution for SGS4 owners that have their smartphone in a car dock while driving.

With the Galaxy S 3 Samsung introduced Smart Stay, another feature that leveraged the front facing camera to detect when you’re facing the smartphone and keep the screen on as a result. With the Galaxy S 4, Samsung expands the use of the front facing camera to enable pausing/unpausing of video playback depending on whether or not you’re looking at the display, and enabling tilt to scroll if the camera detects that you’re looking at it.

I tested both features and they seemed to work intermittently, although I’m not a fan of making judgement calls on software until final builds are available. 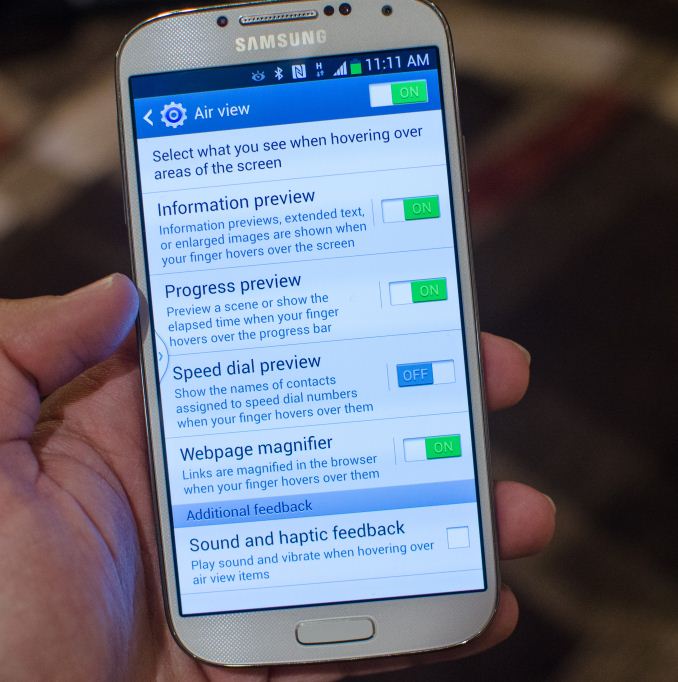 All of these gesture and camera based user interface features can be enabled/disabled, many on a per application basis but at minimum on a global level. Samsung does have a good amount of control/granularity in the SGS4 software for these features.

The SGS4 will ship with some form of optical character recognition, allowing you to scan business cards and automatically populate your contact list with elements from the card. The Samsung Optical Reader app also supports reading QR codes.

The final new software feature of the Galaxy S 4 is called S Health. S Health includes support for an integrated pedometer, temperature and humidity sensors in the SGS4. The S Health app is supposed to be able to track distance traveled and give you local identification of current temperature and humidity. The app also includes the ability to act as a meal tracker, just look up foods you’ve eaten and it’ll keep a running tally of calories consumed. The S Health app and functionality is a clear attempt to integrate 3rd party pedometer hardware and apps into the phone itself - an obvious next step for any vertically integrated smartphone manufacturer. 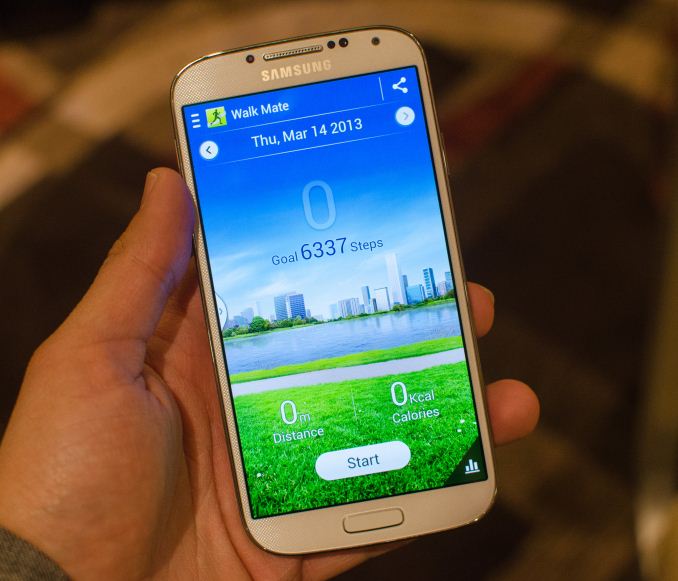 Samsung will offer a line of Bluetooth health accessories that can interface with S Health, including a wrist band pedometer (S Band) so you can leave your SGS4 at home when you go for a walk/run, weight scale and heart rate monitor.

Samsung will also have a new first party cover for the Galaxy S 4 called the S View Cover. This is a standard flip cover but with a small window cut out of the front of it. When the SGS4 detects that the cover is closed, it’ll display a small rectangle of information on its display (visible through the cutout in the cover). In this mode the display will give you the current time, battery/SMS/music status, caller ID and the ability to accept/reject calls. The S View Cover is a pretty neat offering from Samsung and one I see being very popular with anyone who used a flip cover with Samsung’s phones in the past.