As we mentioned previously, the GeForce2 GTS core is manufactured on a 0.18 micron process, which allowed it to carry a 200MHz core clock. However, as we realized with the GeForce 256 as well as the GeForce2 GTS, increasing the core clock proved to be relatively ineffective in the fight for greater performance. The reason being that before the card is given the opportunity to hit its maximum fill rate, which is determined by the GPU's core clock speed, it is limited by the amount of memory bandwidth that the GPU is provided with.

The reason we mentioned this is because NVIDIA is aware of this fact as well. In order to differentiate the GeForce2 Ultra from the GeForce2 GTS, NVIDIA hand picked those chips which could hit the 250MHz operating frequency of the Ultra. This 25% increase in core clock speed didn't buy the Ultra all that much performance, but it was necessary to justify the $500 price tag. 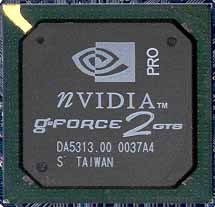 This brings us to the only "upgraded" aspect of the GeForce2 Pro design over the GTS, that is the 200MHz DDR memory clock (effectively 400MHz). At 200MHz DDR, the GeForce2 Pro features a 20% higher memory clock than the GTS (166MHz DDR) resulting in a theoretical maximum of 6.4GB/s of bandwidth to and from the on-board frame buffer. For the sake of comparison, a regularly clocked GeForce2 GTS features 5.3GB/s of available bandwidth while the Ultra can boast an impressive 7.36GB/s.

By featuring the same core that is on GeForce2 GTS boards NVIDIA doesn't have to worry about having to hand pick low-yield parts that work properly at higher clock speeds, resulting in a cost per chip identical to that of a GeForce2 GTS GPU since they are the same part. This can't be said for the Ultra which, by definition, uses a specially picked chip that will end up costing more for a manufacturer to purchase from NVIDIA.

The issue of cost rears its head yet again in the Pro vs Ultra comparison when you take a look at the decision to outfit Pro based cards with memory capable of hitting 200MHz rather than the 230MHz chips used on Ultra boards. In all actuality however, Ultra boards have to use 4ns (500MHz) DDR SDRAM because of currently low-yields on the parts in spite of the fact that they are only clocked at 460MHz. This ends up inflating the cost of Ultra cards quite a bit as 4ns DDR SDRAM isn't that easy to come by, however it is necessary to allow the Ultra to offer a significant performance advantage over the regular GTS.

The Pro attempts to maintain a balance between these two extremes by requiring 4.5/5ns DDR SDRAM chips (4.5ns = 222MHz DDR while 5ns = 200MHz DDR). This helps reduce the cost of implementing a GeForce2 Pro design because of the higher yield and more readily available memory requirements.

The picture that is being painted here seems to be much more attractive than that of a GeForce2 Ultra, simply because you get characteristics similar to an Ultra but at decreased price. While you can find GeForce2 Ultra cards in the $400 - $500 price range, with the average price falling closer to $465, GeForce2 Pro based solutions can be had for approximately $100 cheaper. The cheapest Ultra we've seen being $420, while we've seen GeForce2 Pro's go for less than $310.

At that price point, the GeForce2 Pro is much more reasonable than the Ultra, so what's the catch? It turns out that the reason NVIDIA didn't make that big of a deal out of the launch of the GeForce2 Pro is because it was originally intended to be an OEM-only solution.

In spite of this, one manufacturer sought to bring it to the retail markets and take advantage of the GeForce2 Pro's unique price/performance combination.