We typically don’t cover a lot of supercomputing news outside of the major Top500/Green500 announcements due to the fact that the launches of so many supercomputers are clustered around the official updates to those lists, but the following came across our desk earlier this afternoon from NVIDIA and caught our attention.

Italy’s Cineca computing center has unveiled their latest supercomputer today, a Eurotech created system built on a combination of Intel’s Xeon E5 CPUs and NVIDIA’s Tesla K20 GPUs. While the supercomputer itself is still considered a prototype and is fairly modest overall – its 110 TFLOPS would be good for roughly #250 on the most recent Top500 list – what makes this latest supercomputer particularly interesting (and just a bit snark-worthy) is not its peak performance, but rather its energy efficiency and cooling mechanism. In short, someone has finally paired a K20-based supercomputer with water cooling, with some interesting results. 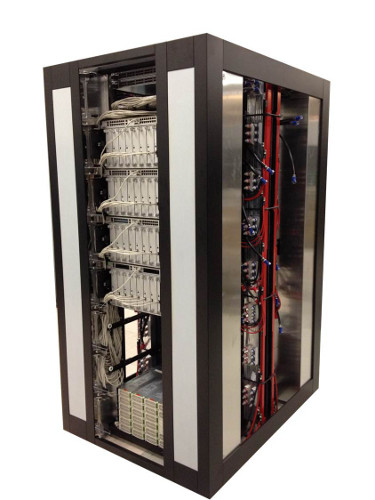 By using water cooling, Eurotech and Cineca have been able to capture the waste heat off of Eurora in a far more dense and more useful manner than air would allow, in turn allowing them to put that waste heat to productive use. By using that heat to not only heat their buildings but also to drive absorption chillers, they’ve been able to reduce the amount of heat that ultimately needs to be removed from the system, and consequently the amount of energy that is spent on cooling.

Adding an extra facet to this is the fact that due to the much greater heat capacity of water over air, using water for cooling – even warm-to-hot water as in the case of Eurora – results in lower processor temperatures than chilled air. In turn, thanks to the positive relationship in semiconductors between temperature and power consumption, these lower temperature processors consume less electricity and thereby produce less heat in the first place. 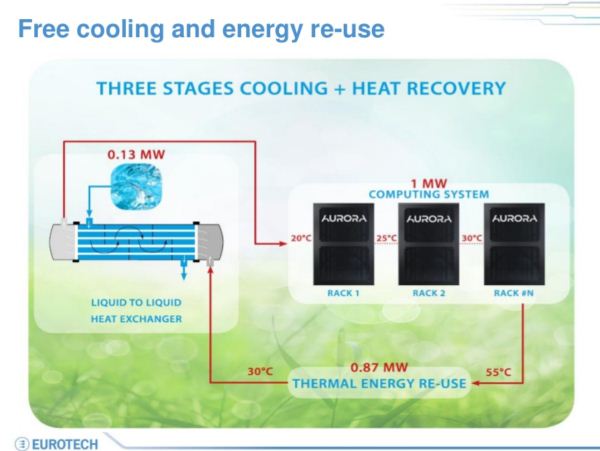 The end result is that between the use the water cooling and various other optimizations made by Eurotech, they’ve been able to produce a supercomputer significantly more power efficient than other K20 supercomputers, or any other supercomputer for that matter. At 110 TFLOPS performance for 34.7KW electricity consumption, Eurora has an energy efficiency of 3,150 MFLOPS/watt, almost 25% better than the current #1 system on the Green500 supercomputer list, a Xeon Phi system that operates at 2,500 MFLOPS/watt. This makes Eurora the most energy efficient supercomputer available by a wide margin for the moment, and while the next Green500 list won’t be published until June, if Eurora is accepted then will be a likely contender for the top spot on that list.

We won’t dwell on this too much more, but if you would like some more details there’s an interesting slide deck from Eurotech published over on NVIDIA’s website. Ultimately using waste heat for productive use is something of a one-trick pony – there aren’t too many productive ways to use that heat due to its relatively low temperature – but nevertheless it offers an interesting alternative into improving supercomputer performance within a fixed power envelope, particularly at a time where we’re beginning to see diminishing returns from smaller semiconductor manufacturing processes.