Out of all four manufacturers we’re talking about in this article, NVIDIA had by far the largest presence at Comdex.  Their suite was crowded with demos, NVIDIA employees, and you could definitely tell that they had been enjoying quite a strong year.

Indeed they have been, the GeForce GTS was launched without the slightest hint of competition from anyone, the GeForce2 GTS is selling extremely well, and the GeForce2 MX will continue to enjoy incredible amounts of popularity for quite some time too.  Although the NV20 didn’t make it out as NVIDIA’s fall product, the part itself seems to be doing quite well and card vendors are expecting samples in December.  With the part sampling next month, we can expect it to hit shortly thereafter.

Out of the three manufacturers that will be launching DX8 parts early next year, it may be that NVIDIA is first to the plate, followed by ATI and then 3dfx.

While there was very little that NVIDIA was willing to talk about publicly regarding the NV20 it won’t be long before you start seeing the pieces of the puzzle fit together.

What NVIDIA was more than happy to talk about however, was their first mobile solution, the GeForce2 Go. 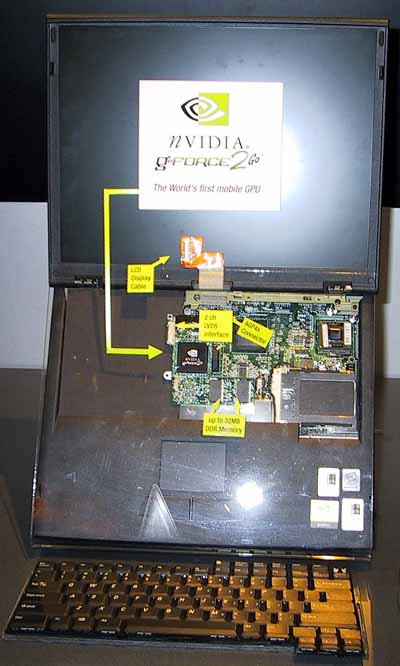