Along with their announcement of their annual desktop GPU rebadge, AMD has also released the full product specifications for their new Radeon HD 8000M mobile GPUs. These GPUs were first announced back in December, but at the time AMD only gave us vague descriptions of each series with little-to-no information on the individual SKUs. Now with CES kicking into gear, we have the individual SKU information on hand. 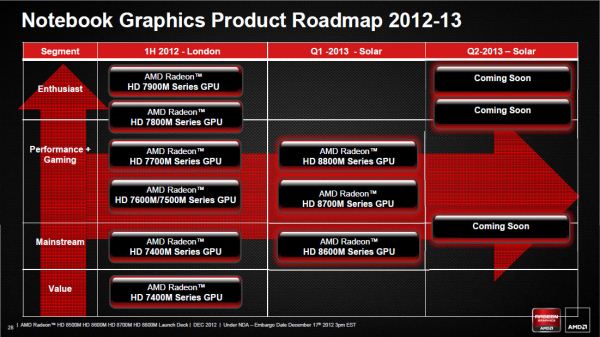 Starting at the top is the 8800M series, which is composed of a number of not-quite rebadges of 7800M parts. All of these GPUs are based on the Heathrow GPU (desktop name: Cape Verde), packing 640 Stream Processors along with 40 texture units and 16 ROPs. This is paired with 2GB of memory on a 128bit bus, with AMD using both GDDR5 and DDR3 depending on the specific SKU.

Other than being minor variations on existing AMD GPUs, these products also enable AMD’s Boost Clock technology for the first time in a mobile part. Boost Clock allows the GPU to turbo up to a higher clockspeed so long as the GPU is under its power and temperature limits, allowing AMD to scrape every bit of thermal headroom from their GPUs. This technology has been available on certain desktop GPUs for more than half a year, but this is the first time we’ve seen it on a mobile part. Notably, NVIDIA’s mobile parts do not feature NVIDIA’s equivalent technology (GPU Boost) despite the fact that they introduced the technology on the desktop first, so AMD is ahead of NVIDIA in this regard.

Below the 8800M series is the 8700M series, marking the introduction of AMD’s new Mars GPU. This is a 4th (and presumably final) first-generation GCN GPU, packing 384 stream processors, 24 texture units, and 8 ROPs. The 8700M is connected via a 128bit memory bus to 2GB of either GDDR5 or DDR3 depending on the SKU, and like the 8800M series also features AMD’s Boost Clock. Interestingly, all Mars products only offer a PCIe 8x bus instead of the GPU industry standard 16x. The performance difference on these lower-performance parts should be miniscule, but it’s an example of one of the ways AMD was able to achieve their smaller die size by reducing the number of pins that needed to connect to the GPU.

Finally we have the 8600M and 8500M series. These are essentially cut-down Mars parts, halving the memory busses from 128bits wide to 64bits wide, and should significantly castrate performance in the process. The feature set and functional unit counts are otherwise identical to the 8700M series. The difference between the 8600M and 8500M series appears to come down to solely clockspeeds; the 8600M parts are clocked up to 775MHz, while the 8500M are clocked up to 620MHz/650MHz.