Determining the TDP of Exynos 5 Dual

Throughout all of our Cortex A15 testing we kept bumping into that 4W ceiling with both the CPU and GPU - but we rarely saw both blocks use that much power at the same time. Intel actually tipped me off to this test to find out what happens if we try and force both the CPU and GPU to run at max performance at the same time. The graph below is divided into five distinct sections, denoted by colored bars above the sections. On this chart I have individual lines for GPU power consumption (green), CPU power consumption (blue) and total platform power consumption, including display, measured at the battery (red). 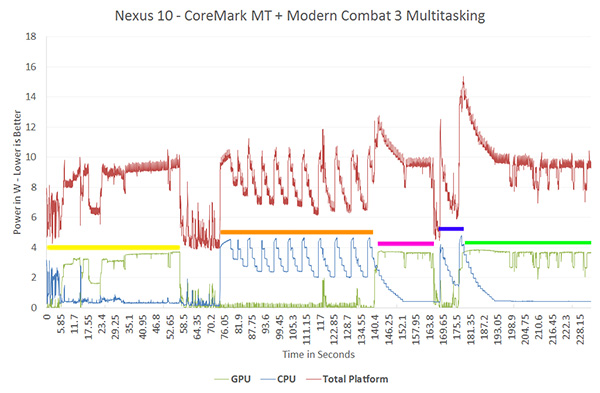 Next, while CoreMark is still running on both cores, we switch back to Modern Combat 3 (pink section of the graph). GPU voltage ramps way up, power consumption is around 4W, but note what happens to CPU power consumption. The CPU cores step down to a much lower voltage/frequency for the background task (~800MHz from 1.7GHz). Total SoC TDP jumps above 4W but the power controller quickly responds by reducing CPU voltage/frequency in order to keep things under control at ~4W. To confirm that CoreMark is still running, we then switch back to the benchmark (blue segment) and you see CPU performance ramps up as GPU performance winds down. Finally we switch back to MC3, combined CPU + GPU power is around 8W for a short period of time before the CPU is throttled.

Now this is a fairy contrived scenario, but it's necessary to understand the behavior of the Exynos 5250. The SoC is allowed to reach 8W, making that its max TDP by conventional definitions, but seems to strive for around 4W as its typical power under load. Why are these two numbers important? With Haswell, Intel has demonstrated interest (and ability) to deliver a part with an 8W TDP. In practice, Intel would need to deliver about half that to really fit into a device like the Nexus 10 but all of the sudden it seems a lot more feasible. Samsung hits 4W by throttling its CPU cores when both the CPU and GPU subsystems are being taxed, I wonder what an 8W Haswell would look like in a similar situation...