In and Around the Nanoxia Deep Silence 1

Producing a good case design doesn't necessarily mean strictly deviating from established convention in favor of something new, and what Nanoxia has done with the Deep Silence 1 is smartly integrate some of the better design choices from competitors alongside some innovations of their own. This case obviously wasn't developed in a vacuum, but as you'll see, the combination of design decisions is incredibly smart.

In terms of building materials, Nanoxia opted to use a combination of thick SECC steel and soft-touch-finished plastic (similar to what BitFenix enjoys). Unfortunately they weren't able to match tones quite as well as BitFenix tends to, but it's a minor complaint. 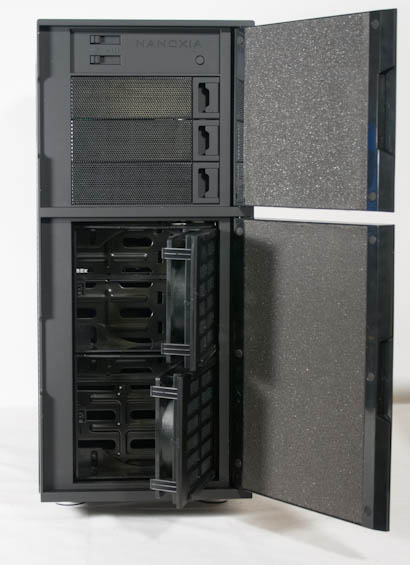 The front of the Deep Silence 1 is probably one of the most striking parts of the design. Silent enclosures traditionally feature doors, and BitFenix and Corsair opted to install doors that opened in either direction. Nanoxia's only open one way (hinged on the right side), but they actually split the door in two, with the top door handling access to the fan controller, reset button, and external bays while the bottom door hides the intake fans. To ensure the intakes are properly fed, Nanoxia also ventilated the sides of the fascia. Additionally, the intake fans themselves are on hinges, allowing you to easily pop them open and clean the dust filters. There are a lot of little things going on here but it adds up to a series of smart, practical descisions that nonetheless allow the case to maintain a very attractive face.

Keeping with that clean but functional design, the top of the case features the power button (interestingly, the power light which circles the power button glows green instead of blue) and two hidden features. The first is the port cluster, which is hinged and hidden away until it needs to be popped up and used. Even open, it doesn't really disturb the aesthetic. The other is Nanoxia's "chimney," which is mechanically raised and lowered by a switch on the left side. Nanoxia cites the chimney as being good for allowing excess heat to silently exit the case, but I found the claim specious and similar to how SilverStone claims the 90-degree motherboard rotation allows for heat to more efficiently be transferred outside of the case. SilverStone's 90-degree cases work because they have intake fans that blow directly on the hottest components; convection has virtually nothing to do with it. By the same token, I think the chimney is probably more appropriate for ventilating the top fan mounts when those mounts are occupied.

Side panels are held to the Deep Silence 1 by thumbscrews, and they slide in on unfortunately old-timey notches. This is something that could and should've been brought up to modern standards by using hinges to hold the panels in place. When you do get inside the DS1, though, you'll find a design that's an excellent refinement of existing case design conventions. 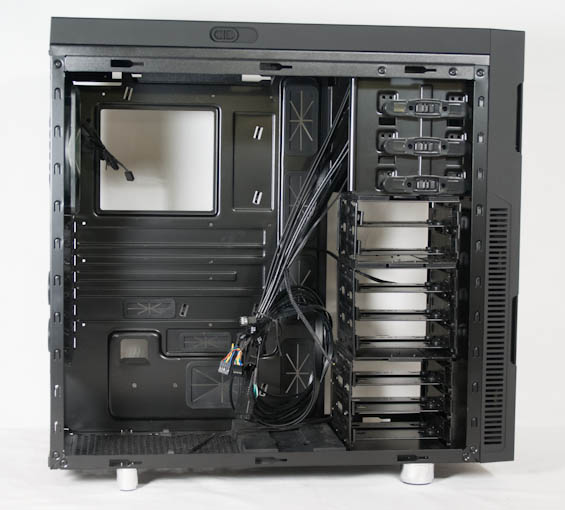 There are a grand total of three drive cages, two of which are removable, and you can mount one to the bottom of the case (above the intake mount) or remove that mounting entirely to install another fan. If you remove both cages you're still left with three drive sleds, which for many users should be more than adequate, and this leaves one of the intake fans completely unblocked. Nanoxia also includes toolless locking mechanisms for the 5.25" drive bays, and better still, they've included routing holes in the motherboard tray not just for ATX boards, but for Micro-ATX as well. It's actually a really smart decision; if the end user is using a smaller board they can still keep things clean, while larger boards simply block the unneeded holes.

Finally, I'd like to point out that Nanoxia includes a wealth of conveniences in the package for the DS1, including an extension cable for the AUX 12V line, an adaptor tray and shield for one of the 5.25" drive bays to allow installing a 3.5" external peripheral, and even grommets to completely block the liquid cooling routing holes in the back of the enclosure. There's also a healthy amount of space inside for installing radiators to the top, back, and bottom, and the DS1 is one of the only cases I've seen that supports 140mm/280mm radiators.