The problem is that currently, there aren’t that many apps, and of them, not many are very good. Obviously, we’re still a couple of days from launch and I’m expecting a significant uptick in the number of quality apps on the 26th particularly, but also over the coming weeks and months. As the new versions of Windows gain market share, the Store will grow and mature. 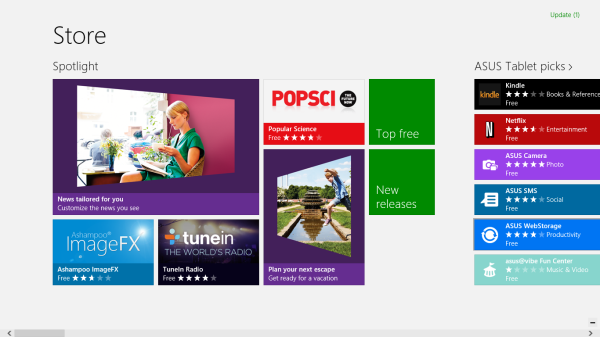 Let’s talk about the Store itself. It’s a bit of a mixed bag. Yes, the Metro visual style looks great here, as it does almost everywhere else. Metro just lends itself well to anything involving lots of rectangular pictures (or app icons, in this case). Unfortunately, the Store is a bit poorly organized, and it’s difficult to find really relevant applications. The “Top Free” list needs a “Top Paid” companion, and there absolutely needs to be a “Sort by most reviews” option. Those two things would make it significantly easier to find the high-volume, headlining applications in any given category. I also really, really want the option to see all applications made by a specific developer (like, say, Microsoft.) The inability to do so is a pretty significant oversight from where I stand. These are all pretty simple fixes, just a few extra organizational options that would go a long way to making the store easier to navigate.

For right now, the best apps I can recommend on the Store are staples like Kindle, Netflix, Evernote, and Wikipedia, along with news and shopping apps from USA Today, NBC News, eBay, Newegg, and Popular Science. Other notable applications include IM+ and a number of internet radio apps like iHeartRadio, TuneIn Radio, and Slacker. In addition to those and a number of applications and games from Microsoft and Microsoft Studios - Xbox SmartGlass, Fresh Paint (a new paint application), OneNote MX (the Metro redesign of OneNote, still a preview), the Modern UI version of Remote Desktop, Reckless Racing, Hydro Thunder, etc - there’s not much out there, except maybe Fruit Ninja. 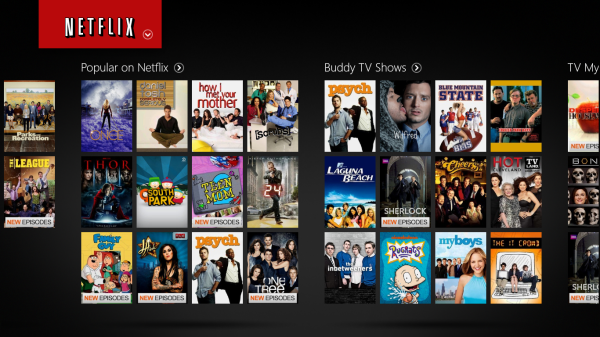 There’s still a lot of 3rd party stand-ins for applications that will get first party support, like a BBC News application actually developed by BBC and things like that. These independent apps can sometimes be good, but are almost always outdone by the first party ones. It’s just a matter of design and quality. I know that ESPN is slowly but surely bringing out their suite of applications - their cricket and football (soccer) apps were both released recently, which indicates that Scorecenter and their other applications for online radio and live video will all hit the store in the near future, but they’re just one developer. I just don’t know how much time it will take for a majority of those applications to be released. Skype isn’t currently available in the store, but will be on the 26th, which makes me wonder how many new applications will hit Windows Store in time to coincide with the official launch date of Windows 8. I want to revisit this a week from now, or even just two days from now, to see where things stand.

I’ve seen a lot of early reviews of Windows RT-based tablets decry the app situation, but I’m assuming the growth will occur significantly more quickly than it has for, say, Windows Phone, for one simple reason: this is still Windows. A very different kind of Windows, yes, but it’s not like people will stop buying Windows computers. Windows Phone has had issues gaining marketshare over the last two years, but starting tomorrow, 85% (or more) of computers being sold worldwide will be running either Windows 8 or Windows RT. There are too many people out there with new Windows systems for developers to somehow just stop releasing Windows applications.

It's important to remember that devs aren’t creating apps for Windows RT specifically, they’re creating new applications for the new Windows UI, which just happens to cover two very different hardware platforms. Nobody worries about the state of Windows 8 applications because all of the legacy desktop apps will still work, but the Windows Store will develop and mature at the same pace regardless of whether you’re looking at Windows 8 or Windows RT. Everyone worrying about Windows RT tablets and third party apps should have the same concerns about touch-centric apps for Windows 8 tablets.

But regardless, we’re still missing some huge applications at this point: Facebook, Twitter (though Rowi makes for a good stand-in), Dropbox, Pandora, Yelp, any kind of Google service, anything from Adobe, and generally useful but not necessarily headlining financial and bank-specific apps. Check back with us in a few days, because I don’t think the Windows Store will stay as sparsely populated as it is currently, but until that changes, there will be questions.