The original generation Galaxy Note I played with was an AT&T model, and as a result was based around the same platform (I call a platform the combination of SoC and baseband) as the Skyrocket, which was AT&T’s SGS2 with LTE. That platform was Qualcomm’s Fusion 2 chipset, the very popular combination of a APQ8060 SoC (45nm dual core Scorpion at 1.5 GHz with Adreno 220 graphics) and MDM9x00 for baseband (Qualcomm’s 45nm first generation multimode LTE solution). The US-bound Galaxy S 3 variants were built around the successor of that platform, which was Qualcomm’s MSM8960 SoC (28nm dual core Krait at 1.5 GHz with Adreno 225 graphics and an onboard 2nd gen LTE baseband). The result was quick time to market with the latest and greatest silicon, improvements to performance, onboard LTE without two modems, and lower power consumption. 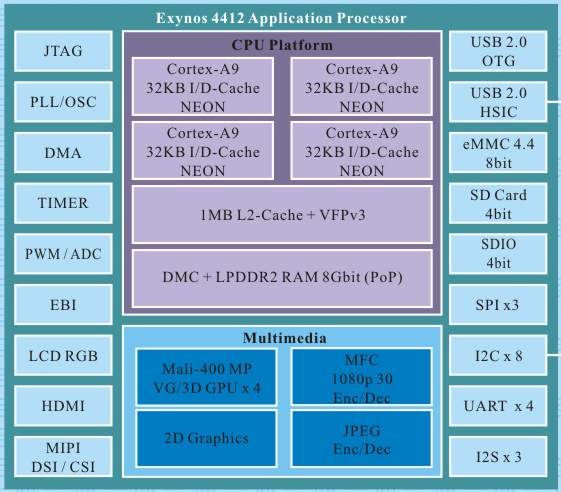 The Galaxy Note 2 does something different, and finally brings Samsung’s Exynos line of SoCs into devices bound for the USA where air interfaces are a combination of LTE, WCDMA, and CDMA2000. It’s clear that the Note 2 was on a different development cycle, and this time the standalone 28nm LTE baseband I’ve been talking about forever was available for use in the Galaxy Note 2, that part is MDM9x15, same as what’s in the iPhone 5, Optimus G, One X+, and a bunch of other upcoming handsets. If you haven’t read our other reviews where I’ve talked about this, the reason is that MDM9x15 is now natively voice enabled (MDM9x00 was not unless you ran with a Fusion platform), smaller, and lower power than its predecessor. The result is that there’s finally a multimode FDD-LTE, TDD-LTE, WCDMA (up to DC-HSPA+), EVDO (up to EVDO Rev.B) and TD-SCDMA baseband out there which doesn’t require going with a two chip solution. I could go on for pages about how this is primarily an engineering decision at this point, but the availability of MDM9x15 is why we see OEMs starting to finally ship handsets based around SoCs other than Qualcomm’s and also include LTE at the same time.

Anyhow, for a lot of people this will be the first time experiencing Samsung’s own current Exynos 4 flagship, Exynos 4412, which is of course quad core ARM Cortex A9s at a maximum of 1.6 GHz alongside ARM Mali–400MP4 built on Samsung’s 32nm HK-MG process. To the best of my knowledge, the Note 2 continues to use a 2x32 bit LPDDR2 memory interface, same as the international Galaxy S 3, though PCDDR3 is also a choice for Exynos 4412.

I’ve put together a table with specifications of the Note 2 and some other recent devices for comparison.

The Galaxy Note 2 also is one of the first handsets on the market other than Nexus devices to ship running Android 4.1. This puts it at a definite advantage in some tests as we’ll show in a moment, both due to improvements from project butter and what appear to be even newer Mali–400 drivers. I pulled the Note 1 out of my drawer and updated it to Android 4.0.1 and ran all the same tests again.

First up are some of the usual JavaScript performance tests which are run in the stock browser. Anand added a few in, and personally I think we’ve got almost an abundance of JavaScript performance emphasis right now. Again this is strongly influenced by the V8 JIT (Just In Time Compilation) library bundled with the stock browser on Android. OEMs spend a lot of time here optimizing V8 to the nuances of their particular architecture which can make a substantial difference in scores. 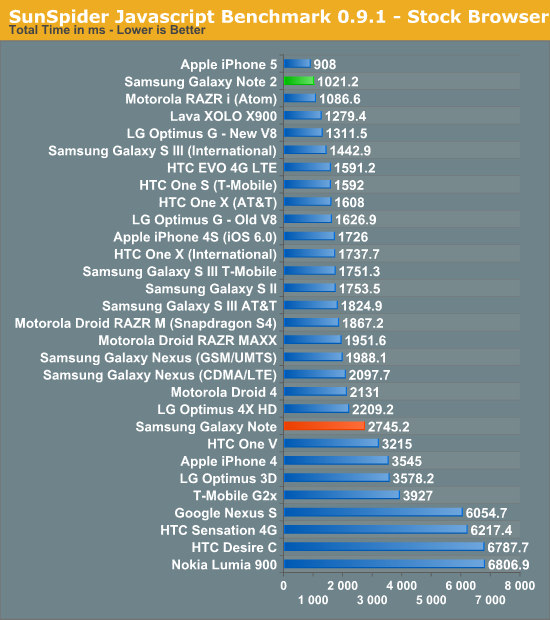 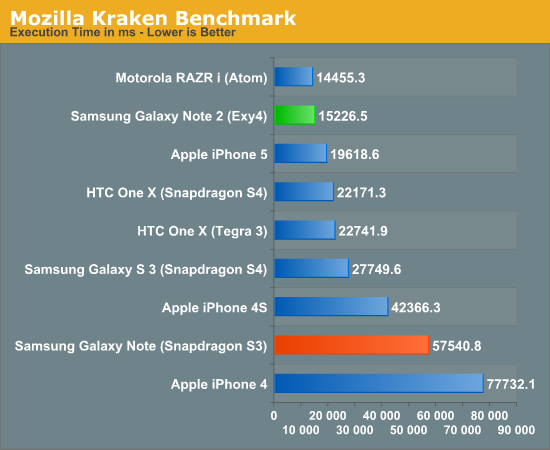 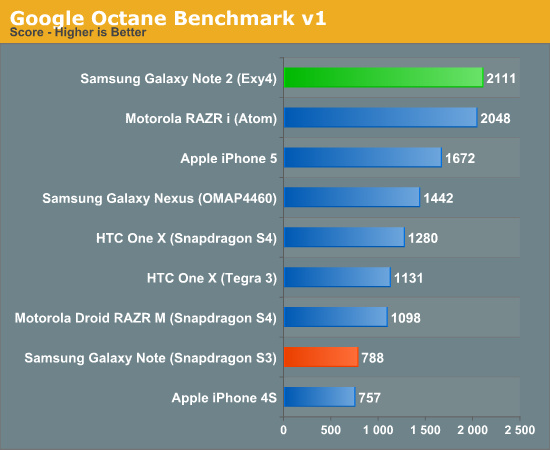 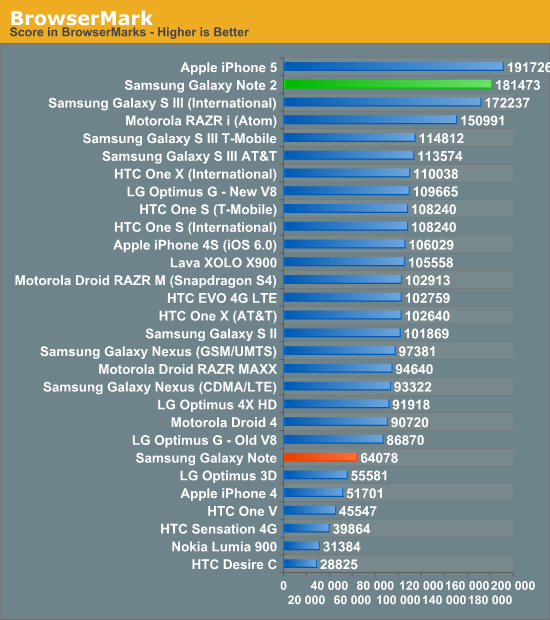 The usual disclosure here is that Android benchmarking is still a non-deterministic beast due to garbage collection, and I’m still not fully satisfied with everything that is available out there, but we have to make do with what we’ve got for the moment.

Next up is GLBenchmark 2.5.1 which now includes a beefier gameplay simulation test called Egypt HD alongside the previous Egypt test which is now named Egypt Classic. Offscreen resolution gets a bump to 1080p as well. 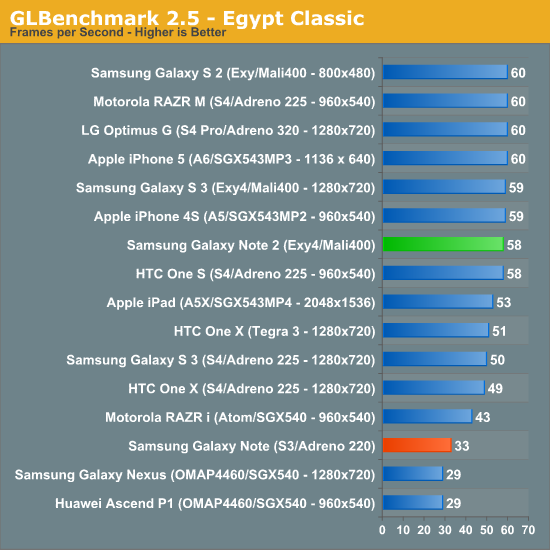 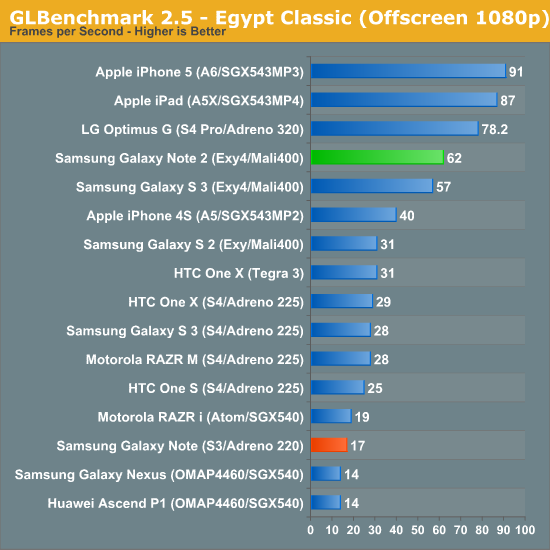 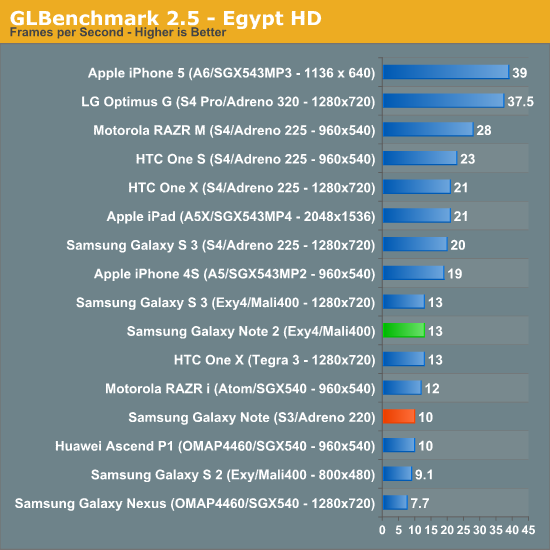 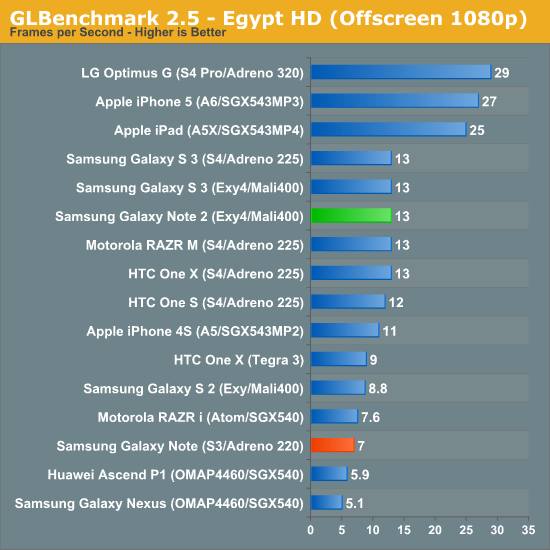 Here we see Mali–400 MP4 performing basically the same as I saw in the International Galaxy S 3 which is no surprise — it is after all the same SoC. Other than a slight bump in the Egypt Classic offscreen performance numbers, there aren’t any surprises. We see Exynos 4412 putting up a good fight, but Adreno 320 in APQ8064 is still something to look out for on the horizon. I'd run Taiji as well but we'd basically just see vsync at this point.

Vellamo 2.0.1 is a new version of the previously well-received Vellamo test developed by Qualcomm initially for in-house performance regression testing and checkin, later adopted by OEMs for their own testing, and finally released onto the Google Play Store. This is the first time the 2.0 version of Vellamo has made an appearance here, and after vetting it and spending time on the phone with its makers I feel just the same way about 2.0 as I did 1.0. There’s still the disclosure that this is Qualcomm’s benchmark, and that stigma will only go away after the app is open sourced for myself and others to code review, but from what deconstruction of the APK I’ve done, and further inspection of the included jS, I’m confident there’s no blatant cheating going on, it isn’t worth it. 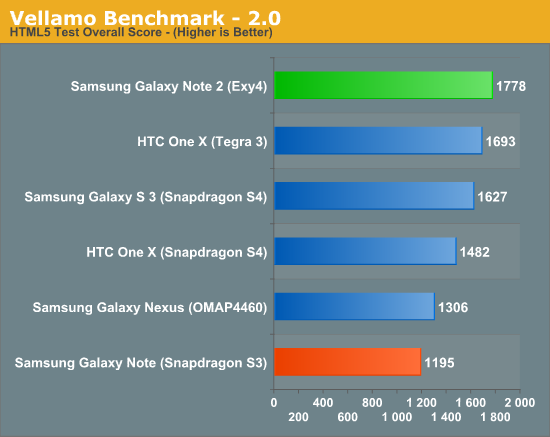 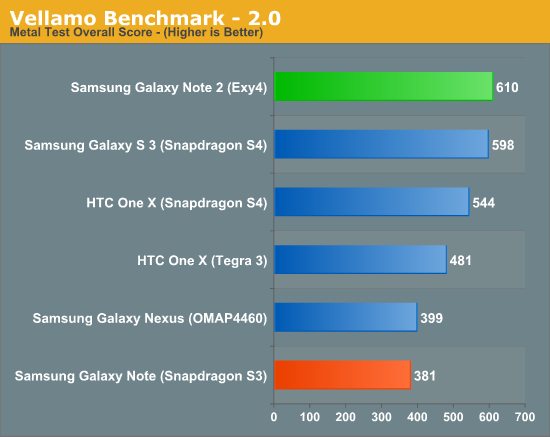 Vellamo 2’s biggest new thing is the inclusion of a new ‘metal’ test which, as the name implies, includes some native tests. This is C code compiled with just the standard android compiler and -o2 optimization flag into both ARMv7 and x86 code. There’s Dhrystone for integer benchmarking, Linpack (native), Branch-K, Stream 5.9, RamJam, and a storage subtest.

Exynos 4412 and Android 4.1 is definitely a potent combination, which puts it close to the top if not at the top in a ton of CPU bound tests. My go-to application with lots of threading is still Chrome for Android, which regularly lights up four core devices completely. Even though our testing is done in the stock browser (since this almost always has the faster, platform-specific V8 library) my subjective tests are in Chrome, and the Note 2 feels very quick.