Apple's philosophy on increasing iPhone performance is sort of a mix between what Microsoft is doing with Windows Phone 7/8 and what the high-end Android smartphone makers have been doing. On the software side Apple does as much as possible to ensure its devices feel fast, although I notice a clear tendency for newer iOS releases to pretty much require the latest iPhone hardware in order to maintain that speedy feel over the long haul. When it comes to hardware, Apple behaves very much like a high-end Android smartphone vendor by putting the absolute fastest silicon on the market in each generation of iPhone. The main difference here is that Apple controls both the software stack and silicon, so it's able to deliver a fairly well bundled package each year. It's a costly operation to run, one that is enabled by Apple's very high profit margins. Ironically enough, if Apple's competitors would significantly undercut Apple (it doesn't cost $599 - $799 to build a modern smartphone) I don't know that the formula would be able to work for Apple in the long run (Apple needs high margins to pay for OS, software and silicon development, all of which are internalized by Apple and none of which burden most of its competitors).

Good cross platform benchmarks still don't really exist on smartphones these days. We're left describing experience with words and trying to quantify performance differences using web based benchmarks, neither of which is ideal but both of which will have to do for now. The iPhone 5 experience compared to the 4S is best explained as just being snappier. Apps launch faster, scrolling around iOS Maps is smoother, web pages take less time to load and the occasional CPU/ISP bound task (e.g. HDR image processing) is significantly quicker. If you're the type of person who appreciates improvements in response time, the iPhone 5 delivers.

How does it compare to the current crop of high-end Android smartphones? I would say that the 5 generally brings CPU performance up to par with the latest and greatest in the Android camp, and in some cases surprasses them slightly. It's difficult making cross platform comparisons because of huge differences in the OSes as well as separating out tasks that are CPU bound from those that simply benefit from a higher rendered frame rate.

I took a cross section of various web based benchmarks and looked at their performance to help quantify where the iPhone 5 stands in the world. First up are the RIABench focus tests, these are javascript benchmarks that focus on various compute bound tasks. I used Chrome for all Android devices to put their best foot forward. 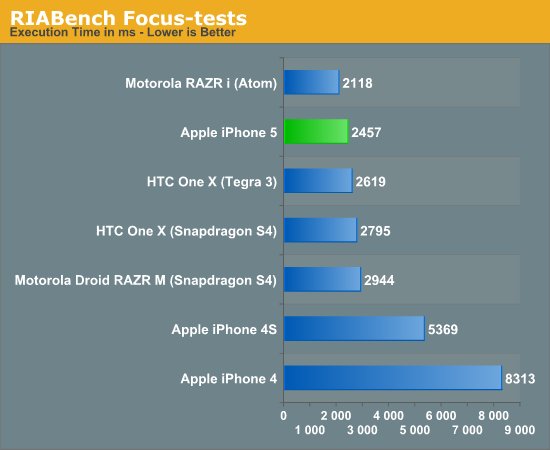 This first test shows just how slow the 800MHz Cortex A9s in the iPhone 4S were compared to the latest and greatest from Qualcomm and NVIDIA. At roughly half the clock speed of those competitors, the 4S was just much slower at compute bound tasks. Apple was able to mask as much of that as possible with smooth UI rendering performance, but there was obviously room for improvement. The iPhone 5 delivers just that. It modernizes the iPhone's performance and inches ahead of the Tegra 3/Snapdragon S4 platforms. Only Intel's Atom Z2460 in the Motorola RAZR i is able to outperform it.

Next up is Kraken, a seriously heavy javascript benchmark built by Mozilla. Kraken focuses on forward looking applications that are potentially too slow to run in modern browsers today. The result is much longer run times than anything we've seen thus far, and a very CPU heavy benchmark: 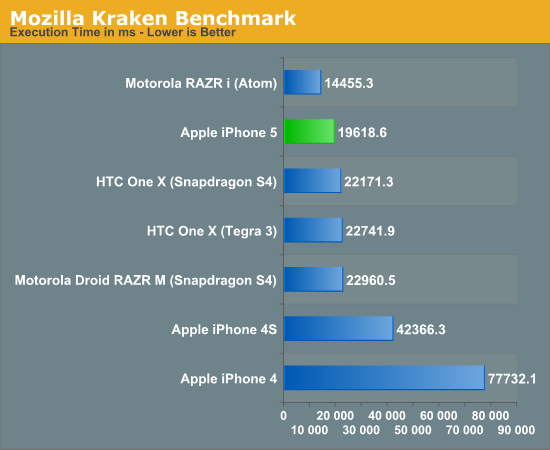 The standings don't change much here. The iPhone 4S is left in the dust by the iPhone 5, which steps ahead of the latest NVIDIA/Qualcomm based Android devices. The Apple advantage here is just over 10%. Once again, Intel's Atom Z2460 pulls ahead with the clear lead.

In our iPhone 5 Performance Preview we looked at Google's V8 javascript test as an alternative to SunSpider. The more data points the merrier: 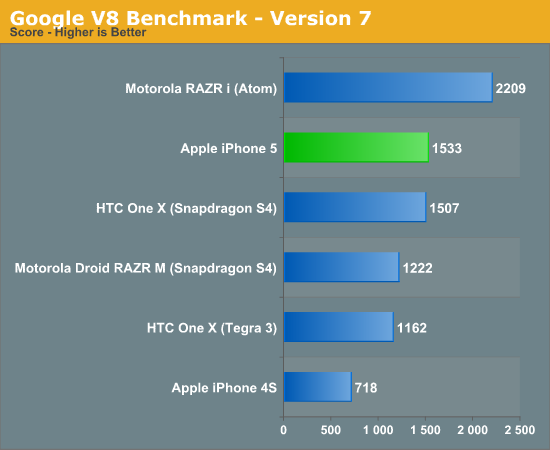 Here the iPhone 5 manages to hold onto its second place position, but just barely. Once more, the Atom based RAZR i maintains the performance lead.

Google's Octane benchmark includes all 8 of the V8 tests but adds 5 new ones including a PDF reader, 3D bullet physics engine and portable 3D game console emulator all built in javascript. 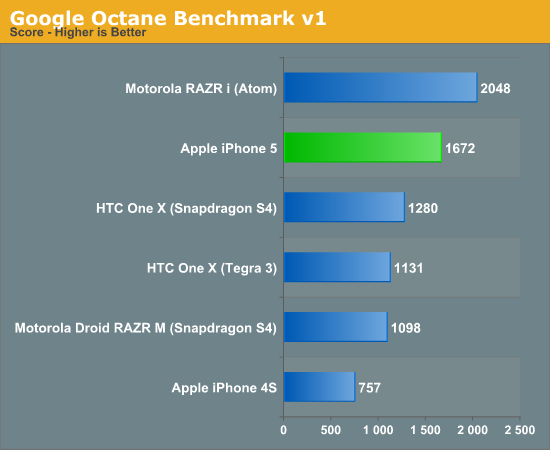 The 5 pulls ahead of the HTC One X here and maintains a healthy 31% lead, but once again falls short of the RAZR i.

We of course included our SunSpider and BrowserMark tests, both of which show the iPhone 5 very favorably: 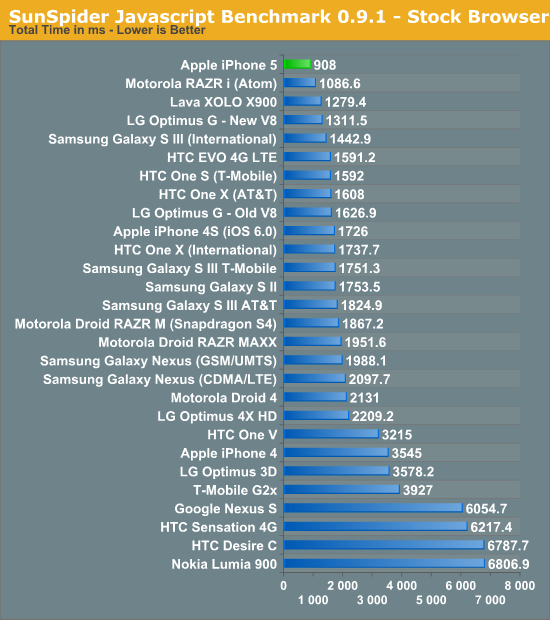 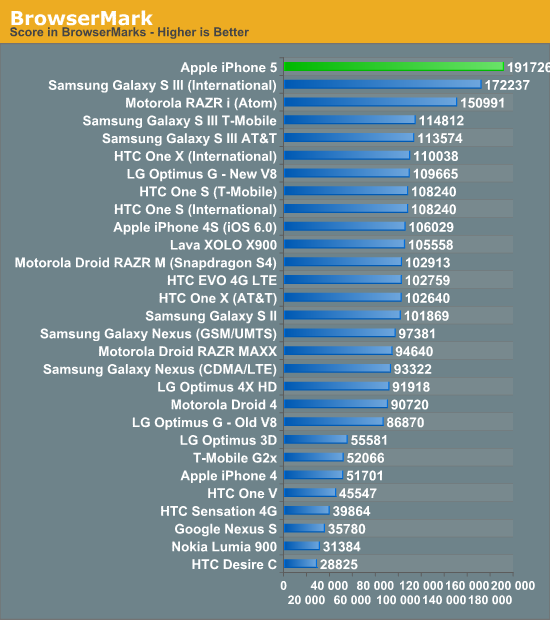 Performance obviously depends on workload, but it's clear the iPhone 5 is a big step forward from the 4S and tends to outperform the latest ARM based Android smartphones. As the rest of the ARM based SoC players move to Cortex A15 designs they should be able to deliver faster devices in the first half of 2013.

Intel's current position when it comes to CPU performance is interesting. A move to a dual-core design could be enough to remain performance competitive with 2013 ARM based SoCs. Remembering that Atom is a 5 year old CPU core that performs at the level of a 10 year old mainstream notebook CPU puts all of this progress in perspective. Intel's biggest issue going forward (other than getting Atom into more tier 1 phone designs) is going to be improving GPU performance. Luckily it seems as if it has the roadmap to do just that with the Atom Z2580.