Earlier tonight LG announced its Optimus G, the company's first Qualcomm Fusion 3 based smartphone (APQ8064 + MDM9615). If you don't follow Qualcomm's naming system closely, we're talking about a quad-core 28nm Krait SoC with Adreno 320 graphics core paired with its very popular 28nm LTE baseband. The CPU cores can independently clock up to 1.5GHz and users can even manually shut off a pair of cores to save power.

Brian got some hands on time with the Optimus G earlier tonight, but that just extended into a benchmarking session. While Brian spends more time with the Optimus G, he did send over a bunch of preliminary performance results from the device. We've seen APQ8064 in Qualcomm's MDP/T reference tablet, but this is the first time we've been able to gauge performance in a (nearly) shipping device.

I'm still not pleased with the current state of Android benchmarking but we'll have to make do with what we've got.

First off is Linpack, a reasonable indicator of heavy FP performance and memory bandwidth, but an even better tool for showing single and multi-core scaling. 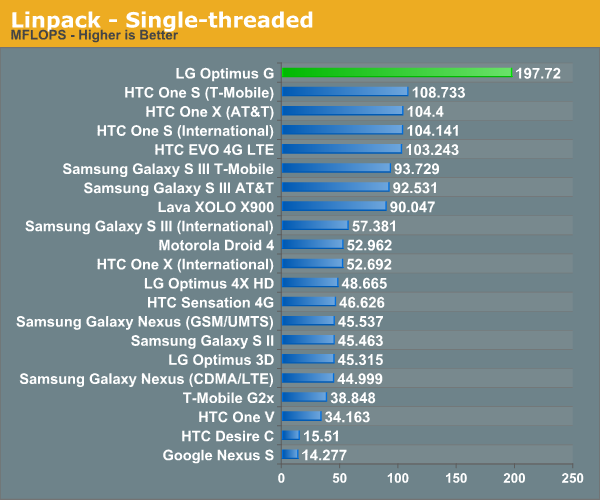 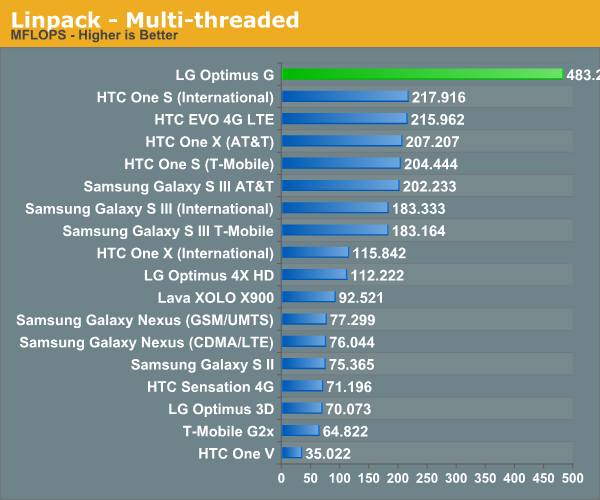 Qualcomm's Krait architecture has always done very well in this test, but the move to four cores doesn't actually show perfect scaling here. It's unclear if the test is simply running too quickly to produce a consistently high result, or if we're just running into issues feeding all four cores running at 1.5GHz because the 1 to 4 thread scaling is only around 2.45x here (vs 4x ideal). Either way we do see scaling beyond what you get from two cores with the quad-core APQ8064.

Next up we have our two standard browser benchmarks: Sunspider and Browsermark. These two tests use LG's custom browser and measure aspects of JS performance: 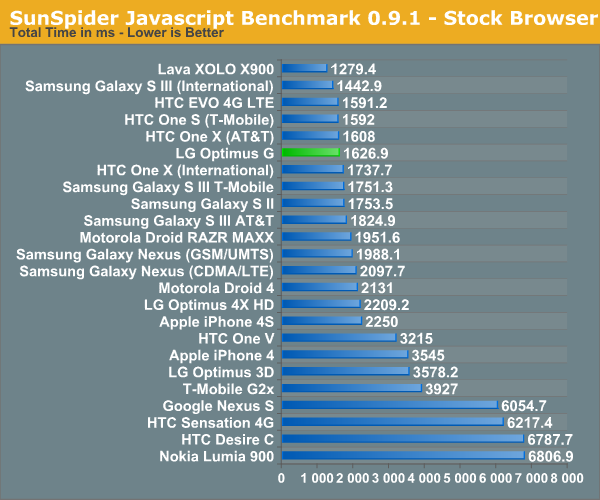 Sunspider is lightly threaded and thus doesn't see huge scaling going to four cores. In fact, in this case we're not seeing any real improvement over the dual-core Krait based devices from HTC. It's unclear how much of the Optimus G's performance is due to LG's browser/software stack vs. the underlying hardware. 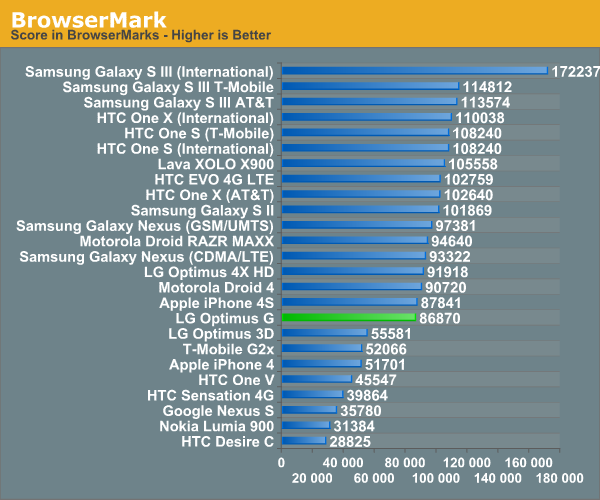 BrowserMark doesn't look great and the Optimus G's performance is almost certainly due to LG's own browser code. Qualcomm's reference software stack can provide great performance, but it's up to the individual OEM to take advantage of it.

Finally we have our two GLBenchmark 2.5 GPU tests: Egypt Classic and HD, both run in their offscreen 1080p modes without Vsync enabled. Here the Adreno 320 is really able to shine: 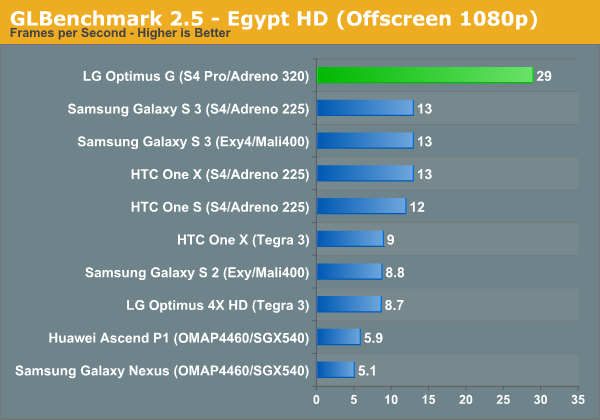 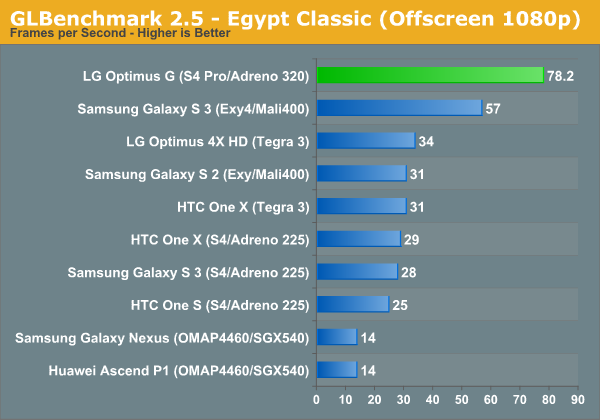 Performance looks awesome in both tests. The Egypt HD numbers are bordering on reasonably smooth and the classic numbers are great of course. Both of these tests run at resolutions higher than the Optimus G's native 1280 x 768 panel. At native res you're looking at 37.5 fps for Egypt HD and 59.8 fps for Egypt Classic, both extremely smooth.

If anything it's the GPU performance that's most exciting about the Optimus G. Most Android applications don't show great scaling from two to four cores, but the boost you get from the Adreno 320 will definitely be apparent in visually demanding games.