While Google and ASUS have been basking in the glory of the release of the Nexus 7, and with Apple expected to announce a smaller iPad as early as next week), Amazon has been busy building two devices that cover all bases, media and productivity.

The Fire HD 7" is a likable candidate in the race for best media tablet. The closed-OS mentality of Amazon's highly-modified version of Android may steer some users awry, but Prime users who enjoy the benefits of the thousands of TV shows and Movies that stream free through Fire tablets may have a greater interest in the closed OS. Amazon recently announced a partnership with Epix to add even more content to their service, which as of this writing includes a total of 2,037 TV seasons (1,524, plus 513 HD seasons) and 5,888 movies.

That is a lot, and Amazon has steered towards newer shows and films like The Avengers and Doctor Who, not I Love Lucy. 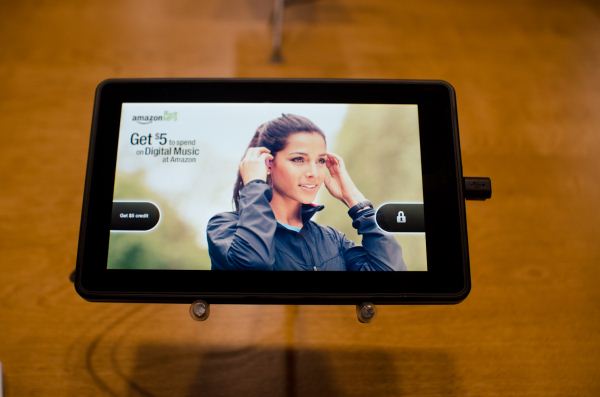 On top of that, Amazon's massive selection of books and magazines is the largest available, more than Apple and Google can muster for direct competitoin, and that likely won't change even if  the Kindle tablets aren't successful. All of that considered, Amazon's focus for the HD tabs is twofold: more storage for a lower cost, and an excellent display. I'll need more testing to confirm the latter, but they've certainly made high-end tablets accessible by cost alone.

Again, without better equipment on-site and ample time to benchmark, I can't give any quantitative measurements on how good the display is. The way that Amazon is making the screens on both the 7" and 8.9" "stunning" is through laminating the two panes of glass together to get rid of any air gaps generally made between separate panes, and using what Amazon calls an Advanced True Wide polarizing filter, to improve viewing angles. The lamination is supposed to also reduce glare up to 25%, and from roughly ten minutes of use the glare is visibly less than typical tablets like the iPad or Galaxy Tab 10.1, but those observations were made under lamps, not sunlight.

Both screens are also very dense, at 254 ppi for the 8.9 and 215 ppi on the 7. On the one hand, I'm happy by the 1920 x 1200 resolution on the Fire HD 8.9", which utilizes the 16:10 aspect ratio instead of the more traditional 16:9 widescreen most of today's tablets, monitors, and TVs use. The additional vertical real estate will be beneficial for users who do a lot of web browsing and perhaps make use of productivity tools with the larger tablet. Then again, I know with the ASUS Transformer Prime Infinity TF700T, at 10.1" and with a display of 1080p, I don't need more space going down.The iPad, by comparison, has a 9.7" 2048 x 1536 4:3 display. The Fire HD 8.9 hits a pleasant median between not enough and too much pixel real estate. We'll have to see in further testing when the 8.9" releases in November. 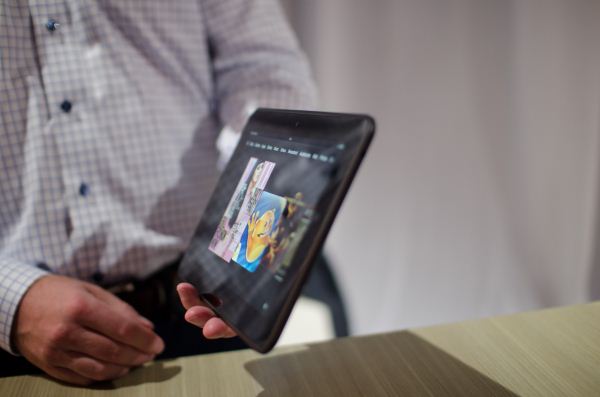 I did play with the viewing angles, and as you can see in some of the pictures in the gallery above, the Fire HD seems to be viewable all around. I had no trouble reading at extremes of over 160 degrees.

The Fire HD models pre-load all non-streaming media (books, magazines) prior to viewing, which even under fast networks makes the tablets appear to lag. While waiting for the book/magazine to load, users still have full access to the device, but no loading screen and the darkened selected reading material just makes the whole process feel cheap, like it can't load properly. In fact, the Fire HD is loading the entire thing to the RAM so that flipping pages is as seamless as possible, which is a nice change of pace, especially for anyone who's used tablets like the Nexus 7 and notices how even on native magazines it takes a few moments to load every new page. Individual page loading doesn't occur on the Fire HD, at least not with the 7" model. The 8.9" model was kept away from public hands because it hasn't been certified by the FCC just yet.

One other point highly stressed by Amazon was the stereo speakers, which were impossible to hear in a crowded airport hangar. Stereo speakers aren't new to tablets; the Samsung Galaxy 10.1 2 has them in the front, directly facing users. On the Fire HD they are placed where users are expected to hold the device; cupping the hand over either of the speaker grills amplifies the sound forwards, though it isn't exactly comfortable to hold the Fire HD like that. I'll have to see how it feels in the home, under extended use.

Because there wasn't enough time to really play with the software, let's talk quickly about pricing for the 8.9" model. It comes in two forms, Wi-Fi only and LTE. The LTE model is, for now, US only, and works on AT&T's LTE network only. Sorry Verizon subscribers. The Wi-Fi version will sell (and is available for pre-order) for $300 and $370 for 16GB and 32GB, while the LTE model is $500 and $600 for 32GB and 64GB, respectively. If you, like roughly 95% of Americans, don't have AT&T LTE available in your area, the Fire HD does support HSDPA/HSPA+ (3G/4G) and EDGE (2G) networks, which is an improvement over Verizon's LTE network. AT&T's 4G network isn't nearly as stable, but it is nationwide in my experience.

For the first year, Fire HD 8.9: owners can pay $50 once for 250MB/month. After that year ends they go to a traditional data plan by AT&T. Monthly plans normally cost $15/month, totalling to $180, so the Kindle Fire HD 8.9" with LTE saves users $130 over other plans, not including the lower starting cost. Amazon also stated that the 3GB and 5GB plans will be available, but hasn't released pricing for those plans. Only the 8.9" tablet will have LTE available; the Fire HD 7" won't have that functionality whatsoever.

The last note is on battery life. Amazon hasn't released any details on the batteries inside any of the Kindle devices, nor did so last year. In our review of the original Kindle Fire, the tablet used a 16Whr battery, which lasted 6 hours of continuous use. The Fire (2012) is expected to last, according to Amazon, 8.5 hours, while the Fire HD 7" should last 11 hours. There is no word yet on the Fire HD 8.9", but those numbers do fall in line with last year's numbers, the increase in performance power and RAM, and more efficient software.