Overclocking on the G1.Sniper 3 was a lot like the experiences we had with the Z77X-UD5H.  Automatic overclocking had its issues depending on the memory kit used, whereas manual overclocking was easy to do and hit some good speeds.

Automatic overclocking is performed through the EasyTune6 software, and offers three levels depending on how adventurous a user you are.  There is also an additional option called ‘Auto Tuning’, which uses a stress test program in order to find a good overclock given a users cooling and case situation.

Manual overclocking was performed entirely in the BIOS.  Gigabyte still needs to refine this part of the overclocking procedure, as CPU voltages, speeds and load line calibration settings all in different menus (with up to four button presses to get between them).  However, given the maturity of the 3D BIOS now, it was relatively quick and painless to navigate between them, if a bit slower than optimal for an enthusiastic well trained overclocker.

For manual overclocks, based on the information gathered from previous testing, starts off at a nominal voltage and CPU multiplier, and the multiplier is increased until the stability tests are failed.  The CPU voltage is increased gradually until the stability tests are passed, and the process repeated until the motherboard reduces the multiplier automatically (due to safety protocol) or the CPU temperature reaches a stupidly high level (100ºC+).

Our test bed is not in a case, which should push overclocks higher with fresher (cooler) air.  We also are using Intel's All-in-one Liquid Cooler with its stock fan.  This is a 120mm radiator liquid cooler, designed to mimic a medium-to-high end air cooler.

Using Gigabyte’s EasyTune6 software in the operating system, we applied the various overclock options it presents.  These are in the form of three levels, each more aggressive than the last.  The final option is an Auto Tuning, which applies a stress test to the CPU and gradually raises the voltages and CPU speed until a maximum given the cooling and the quality of the CPU is reached. 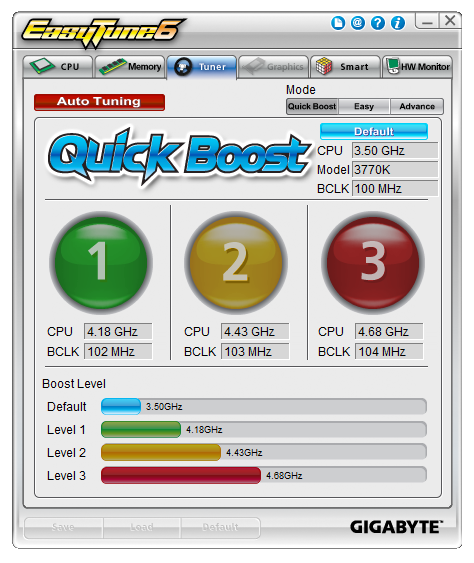 For the three EasyTune6 levels, the overclock is easy to understand – a new multiplier and BCLK is applied to achieve the relevant speed, and a voltage offset is used to keep it stable.  The memory is also adjusted, to one strap below XMP.  This is so the memory is not pushed above XMP due to the BCLK adjustment.

The issue we found with the ET6 overclock levels is the memory adjustment – the memory kit we use for our testing is very sensitive to adjustments, and would not work with any of the ET6 levels but did work at XMP.  However a slower kit from Patriot did work with EasyTune on some of the levels.

Here are our results:

At Level 1, ET6 gave the CPU a 41x multiplier and 102.3 MHz BCLK, to give 4194.3 MHz total.  A +0.110 volt offset on the CPU was also applied, as well as a memory adjustment to XMP minus one strap.  However, this setting gave constant memory errors during PovRay.

With our manual overclocking, we very early switched CPU Load Line Calibration to Extreme to improve stability and remove VDroop.  On an LLC setting of automatic and a fixed CPU voltage of 1.100 volts, in the OS at load this dropped down to 1.068 volts.  Changing LLC to extreme gave an OS reading of 1.104 volts, which usually results in a little extra temperature but improved stability all around.  Here are our results:

Starting at 44x multiplier and 1.100 volts, the system was stable with LLC on automatic and showed an OS load voltage of 1.068 volts.  This gave peak temperatures of 69°C during PovRay and 72°C during OCCT.

The 45x multiplier was stable at 1.100 volts, but with the CPU LLC set to Extreme.  This showed an OS load voltage of 1.104 volts.  This also gave peak temperatures of 74°C during PovRay and 76°C during OCCT.

The 46x multiplier was stable at a minimum of 1.150 volts, with LLC set to Extreme and an OS load voltage of 1.152 volts.  This gave peak temperatures of 79°C during PovRay and 78°C during OCCT.

The 47x multiplier was stable at a minimum of 1.200 volts, with LLC set to Extreme and an OS load voltage of 1.200 volts.  This gave peak temperatures of 85°C during PovRay and 88°C during OCCT.

The 48x multiplier was stable at a minimum of 1.275 volts, with LLC set to Extreme and an OS load voltage of 1.272 volts.  This gave peak temperatures of 97°C during PovRay and 102°C during OCCT.

Understandably we did not try higher speeds or voltages due to the load temperatures already being reached. 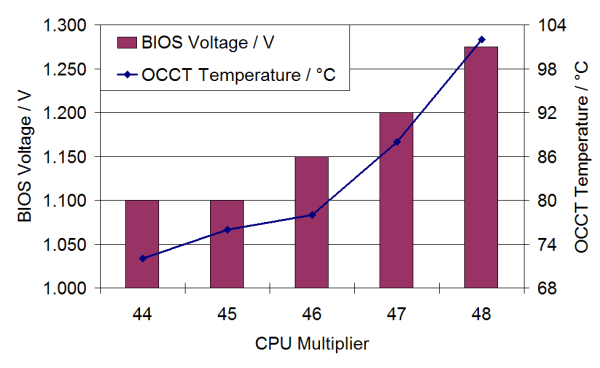