Western Digital has well-defined product categories for each market segment. The WD Black series caters to those requiring a lot of performance without power concerns. The Green series serves the opposite end of the spectrum, where performance is not that much of an issue (secondary drives for PCs / external enclosures), but heat and power could do with some reduction. The Blue series served the middle tier (everyday computing with optimal performance) and the notebook market. However, none of these models are recommended by WD for 24x7 operation (which happens to be an essential requirement for almost all NAS systems). Till now, none of the HDD vendors have anything specific for SMB / SOHO NAS systems. WD aims to capture this segment of the market with the WD Red lineup.

High end enterprise configurations are served by drives rated for stressful conditions (such as Seagate's Constellation and Cheetah lineups, WD's own RE4 and Hitachi's Ultrastar series). These drives commanded a huge price premium that even tempted some IT staff to fill their RAID arrays with consumer hard drives. Unfortunately, most of these temptations have resulted in bad results (particularly if the consumer hard drives have not been properly 'configured' prior to usage). What are the aspects which differentiate these enterprise drives from consumer versions?

SMART Command Transport Error Recovery Control: This feature allows the OS to set a soft time limit for completion of reads and writes. Seagate calls this ERC (Error Recovery Control). Samsung / Hitachi drives term this CCTL (Command Completion Time Limit), while Western Digital gives it the TLER (Time Limited Error Recovery) moniker. In a typical desktop drive, this could be a large number. In case of a bad sector or some other similar issue, the hard disk might keep retrying the access or try to remap the bad sector right away. The OS would remain waiting for the hard disk to deliver its delayed response. In a NAS environment, this delay could prove fatal, with the drive either being dropped or the NAS going into rebuild mode. So, it is essential that the SCT ERC number be set to a duration shorter than what the NAS OS would wait for before declaring the drive dead. Enterprise drives usually allow configuration of this value and set it by default to a low one (because the RAID controller can get hold of or recover the data from the other drives in the NAS).

Vibration Tolerance: NAS systems usually place a large number of drives close together. If vibrations aren't mitigated, it could result in decreased lifespan of the drives. Enterprise drives usually have increased vibration tolerance and also have in-built mechanisms to dampen themselves.

If you are interested in further coverage of these aspects, this page serves as a good starting point. Some studies have shown that there is not much difference between desktop and enterprise hard drives with respect to real-life MTBFs. StorageMojo, in particular, has a number of posts stressing this viewpoint. Assuming that the end user has the data backed up, it is undeniable that the longer warranty period (in which RMA can be processed) is definitely an advantage. It is also likely that if the HDD vendor has enough faith to increase the warranty period, at least some improvements (particularly in the vibration tolerance mechanism) have been done compared to the consumer desktop versions.

Coming back to the WD Red, readers must be wondering how many of the above aspects can be brought to the consumers by WD without eating into their profit margins from the RE4 sales. We first start off with a overview of some of the aspects of the NASware firmware

Intelligent Error Recovery Control: This NASware feature corresponds to the TLER configuration. The value for the soft time limit can be set through smartctl, if the manufacturer allows it. We tried this out on the WD Red drive connected directly to our testbed. 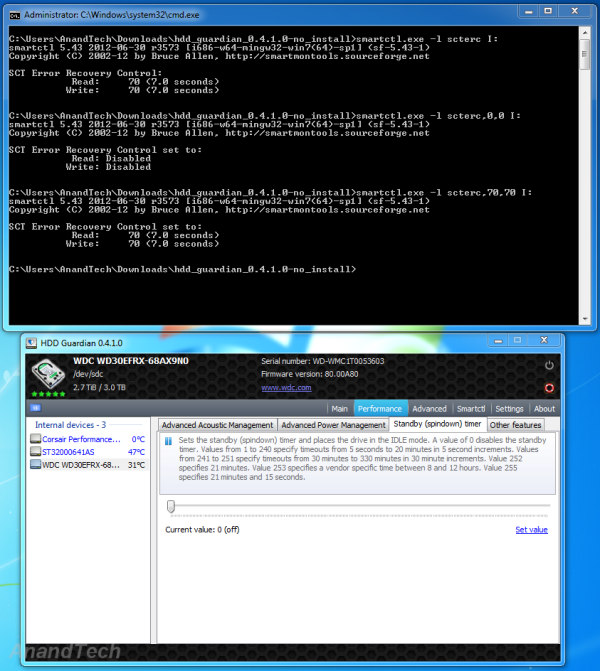 We find that, by default, the soft limit is set to 7s. This means that all the NAS units certified to be compatible with the WD Red drives wait for more than 7s for a transaction to complete before dropping drives or starting a rebuild. The important aspect is that this value is configurable, and can even be completely disabled, as shown in the screenshot above.

Power Management Features: Some hard drives adopt aggressive head parking and disk spindown to save on power. For example, the WD Green drives were guilty of parking the head after just 8 seconds of inactivity. This increases the load cycle count unnecessarily (drives are usually rated for 300K cycles). Disk spindown (or standby) timer is an orthogonal parameter which actually stops the motor and puts the drive in IDLE mode. As the screenshot above shows, the standby timer is off by default, but this value can be altered through HDD Guardian or any other similar software. The head parking parameter is usually accessible through the Advanced Power Management (APM) feature of the hard drive. Unfortunately, HDD Guardian and other HDD tools indicated that there was no APM support in the WD Red. Eventually, we had to resort to running WD's own WDIDLE3 tool in the DOS mode. It turns out that the head parking interval is only accessible through a proprietary command and WD doesn't expose it to external tools. 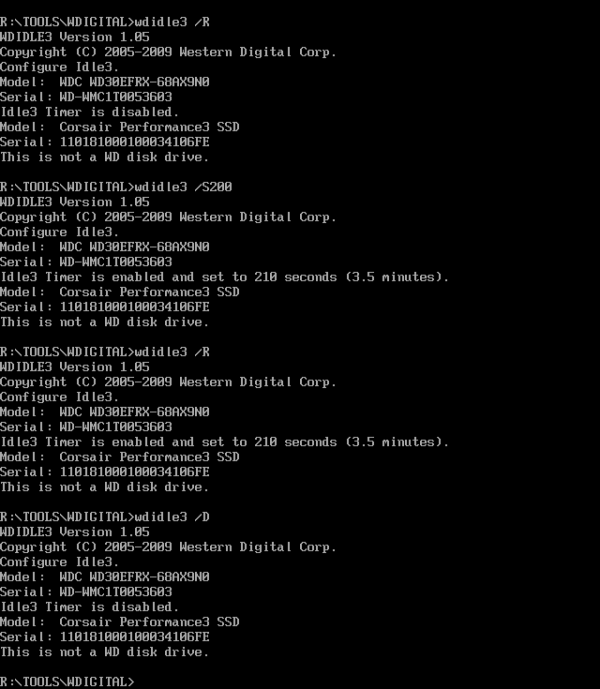 As the screenshot above shows, head parking is completely disabled by default. It is also possible to set the head parking time limit, and it is sticky through power cycles. For NAS applications, it is better to leave it in the default state of head parking being disabled.

How does the WD Red achieve power optimization? The secret lies in IntelliPower. The WD Red drives spin at 5400 rpm as per the analysis done by the folks at SPCR. It is the combination of these features which allow the WD Reds to balance performance and also reduce power.

3D Active Balance : Vibration Reduction: WD claims that it is the first-to-market with 3D mechanical balancing technology for vibration reduction. This has obvious benefits in terms of decreasing noise and avoiding performance reduction. However, comparative measurements of this feature with the competition is outside the scope of this review.

Some of the other features of the WD Red drives include support for the ATA Streaming Command Set in the firmware. This allows optimal drive buffer management so as to ensure smooth streaming of AV data (particularly when the NAS is acting as a DLNA server). This obviously requires support in the NAS firmware also. In addition, we also have support for the SMART Command Set (SCT). We saw this earlier in this section when using smartctl to get / set the TLER parameters. Note that the SCT doesn't allow altering of the APM parameters for spindown / head parking, as they belong to the non-SMART device settings.