There's a bit more variety in our smartphone GLBenchmark 2.5 results. Here we have two Samsung SoCs paired with the ARM Mali-400 MP4 GPU: the original dual-core Exynos 4210 as well as the Exynos 4 Quad (4412) from the international Galaxy S 3. Tegra 3 makes an appearance, as does TI's OMAP 4460. The latter shows up in two configurations, one with the SGX 540 running at full 384MHz clocks in the Huawei Ascend P1 and another with the SGX 540 running at 307MHz in the Galaxy Nexus (CPU clocks are 20% lower as well in the GN). Finally we have Qualcomm's dual-core Snapdragon S4 with its Adreno 225 GPU in the HTC One X and the US Galaxy S 3.

The Mali-400/MP4 continues to be the fill rate king, outpacing NVIDIA's Tegra 3 by over 50%. The advantage doesn't extend however to the triangle tests, expressing a key weakness in the Mali-400/MP4 architecture: significantly ratchet up polygon counts and performance falls flat. Remember that Mali-400 isn't a unified shader architecture, and explicitly features more pixel shader hardware than vertex shader hardware. Qualcomm inches ahead in the vertex and fragment lit triangle throughput tests, although NVIDIA remains quite competitive. Both the Mali-400 and SGX 540 don't do well here. 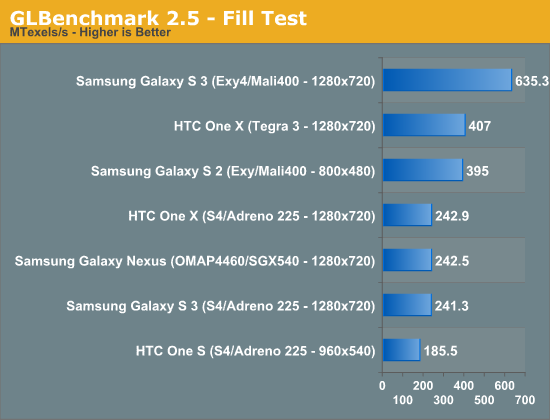 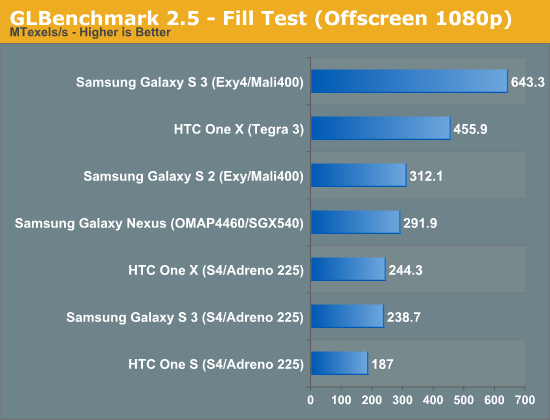 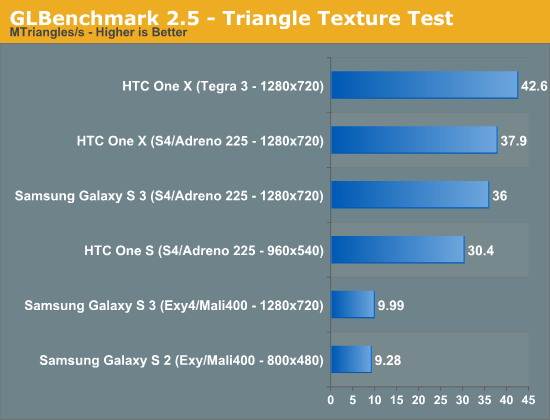 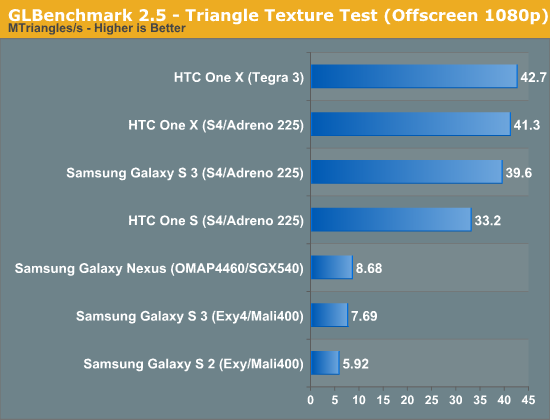 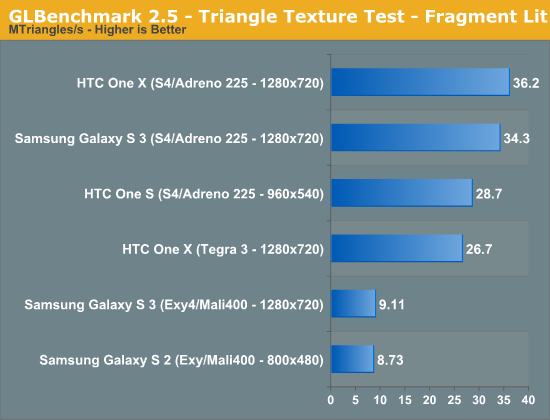 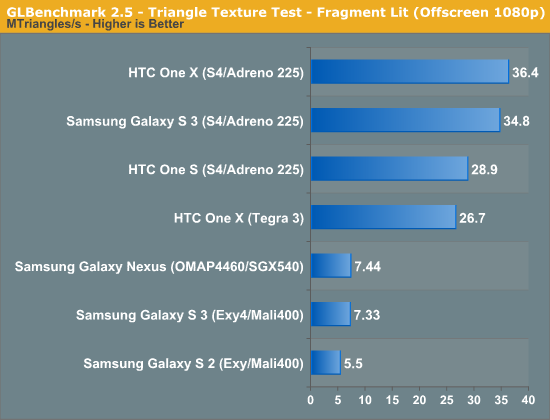 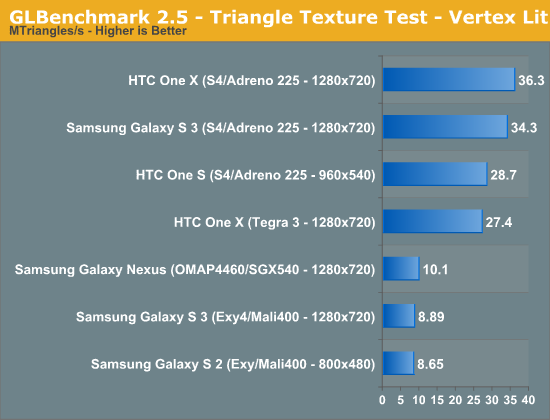 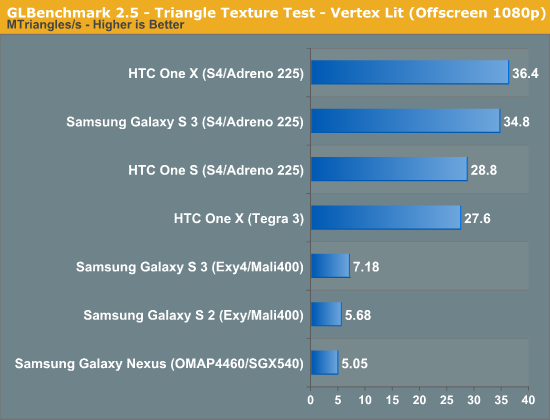 Egypt HD doesn't look quite as bad in the smartphone results, but that's mostly because we have some resolutions at 960 x 540 or below. Even then, none of these devices can break 30 fps. Remove vsync and crank up the resolution to 1080p and we hit the same ~13 fps cap as we did on the tablets. 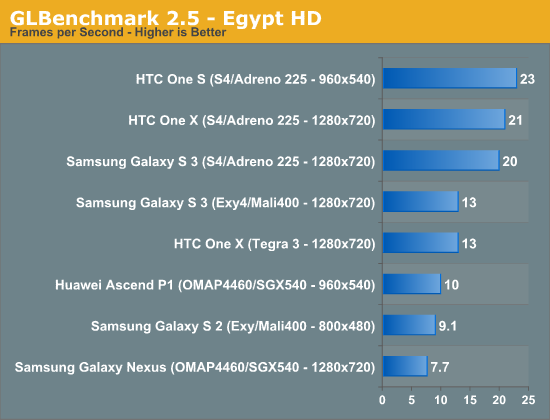 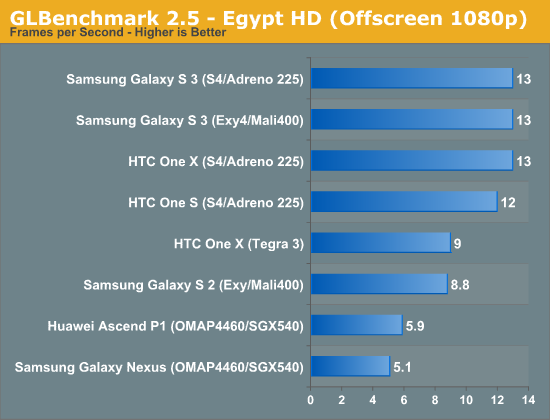 The classic results once again show us that for lighter workloads, all of the modern GPUs (Mali 400, Adreno 225, Tegra 3) are sufficient. At lower polygon counts, even the latest Mali 400 can hit nearly 60 fps at 1080p. 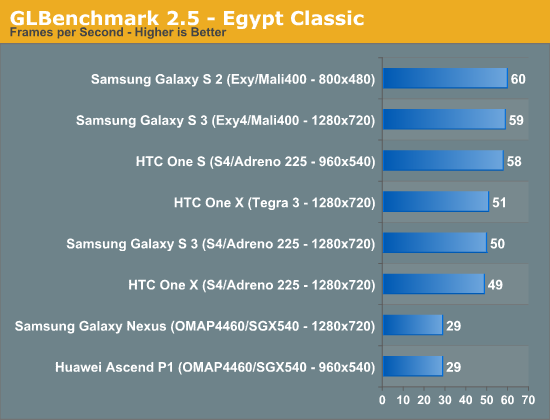 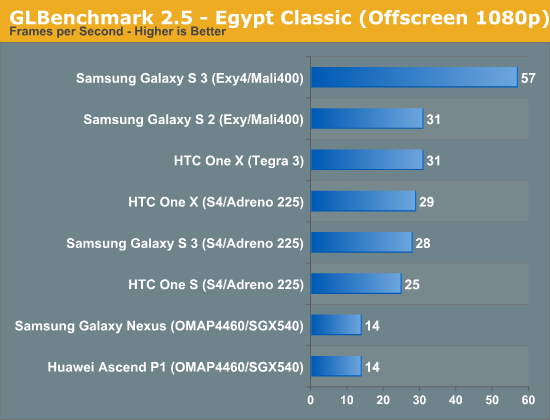