For quite a while now, GLBenchmark has been a regular test in our smartphone, tablet, and SoC reviews. As GPU performance has steadily increased, GLbenchmark 2.1.x started hitting vsync more of the time in onscreen tests, necessitating an updated version of the test with heavier assests, reworked rendering code, and improved functionality for testing. Today Kishonti Informatics has released GLBenchmark 2.5.0 both on the Google Play store and to partners, and we're taking a first look at performance across the current crop of devices.

GLBenchmark 2.5.0 primarily addresses a few shortcomings from the previous version of the Egypt test, primarily by moving to a more challenging version of Egypt. The new game test is named Egypt HD, and moves to a much more complex scene while keeping roughly the same test animation. Geometry count has increased, texture resolution has increased, there's a new water shader, more reflections, and more shadowing. In addition, the offscreen test has now moved to a default resolution of 1080p instead of the previous 720p, for a more challenging workload. This offscreen resolution is now customizable, but we'll be running 1080p for ease of comparison. In addition, the "classic" Egypt test is also a part of GLBenchmark 2.5.0 for those wishing to compare to 2.1.5. In addition, the triangle and fill subtests also stay around for a lower level look at OpenGL ES 2.0 performance. It should go without saying, but GLBenchmark 2.5 is still an OpenGL ES 2.0 test.

We've run GLBenchmark 2.5.0 on all the devices we have on hand, and have split up the results between tablets and smartphones for ease of comparison. The iOS version of GLBenchmark 2.5.0 is still in the review process, and we'll be updating as soon as we can run that on our iPhone 4S, iPad 2, and iPad 3. For now however, we have a good look at performance for the latest devices in Android land.

We have three major SoCs making up our tablet test candidates: NVIDIA's Tegra 3, NVIDIA's Tegra 2 and TI's OMAP 4430. When we get the iOS versions of GLBenchmark 2.5 we'll be able to add the A5 and A5X to this list. We're also waiting on our own Qualcomm MDP/T, which will let us add Adreno 320 results in a few weeks.

The fill and triangle rate tests show us just how far we've come since the days when Tegra 2 and the PowerVR SGX 540 were considered cream of the crop. NVIDIA's Tegra 3 is just significantly faster across the board. The Transformer Pad Infinity's added memory bandwidth (DDR3-1600) helps propel it above the other, lesser Tegra 3 configurations. Again there's nothing new here, just new data that validates what we've already known. 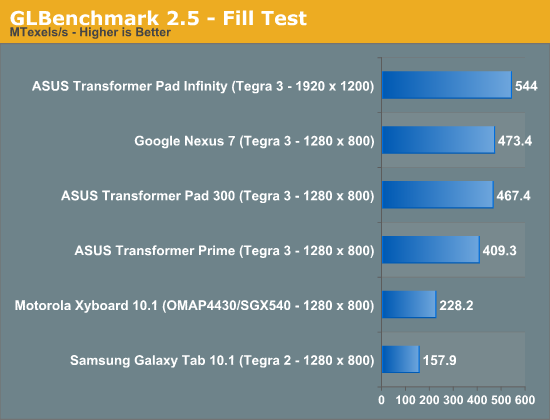 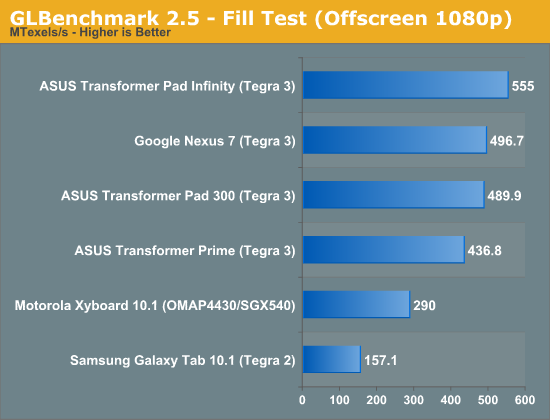 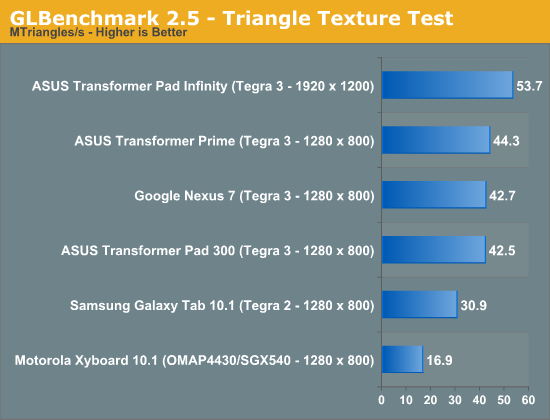 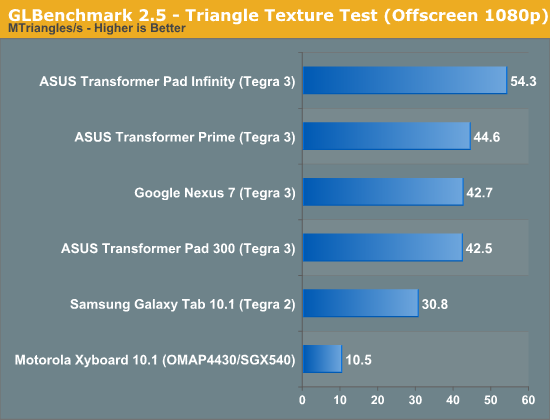 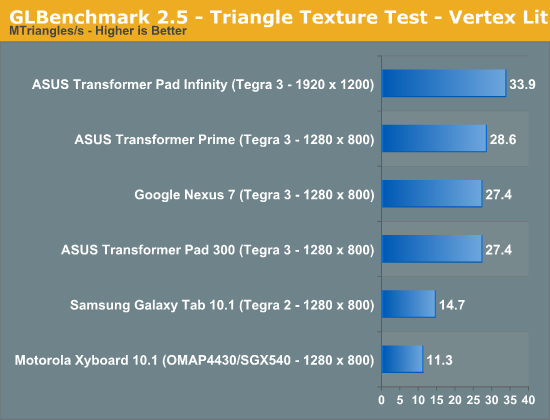 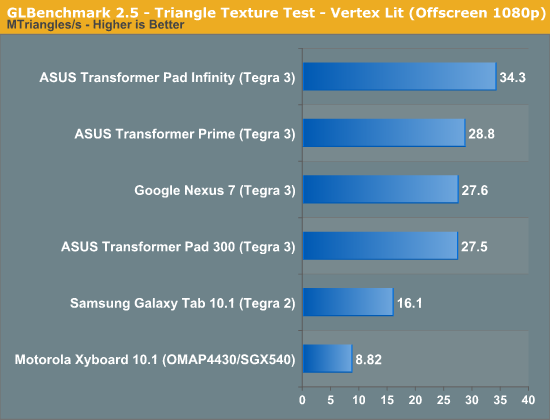 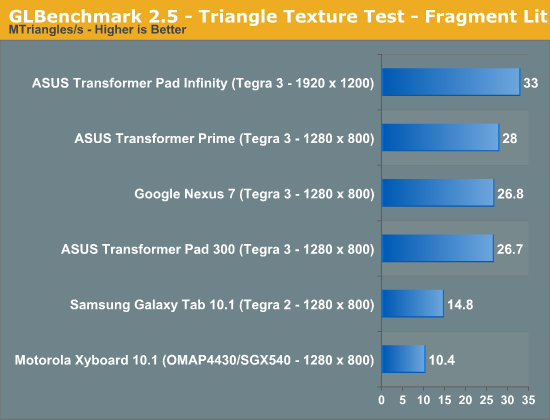 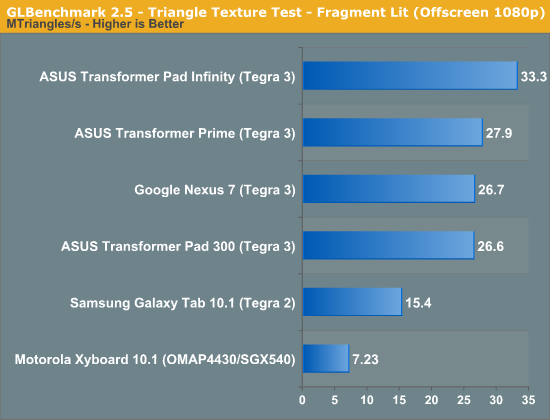 The Egypt HD test raises the bar for what is necessary to produce playable frame rates. At their native resolutions, none of these tablets can even deliver half of a playable 30 fps frame rate. For the next generation of games, we'll need performance around 3x better than NVIDIA's Tegra 3. Qualcomm's Adreno 320 has the ability to deliver that depending on the workload, so it's possible we may see > 30 fps results from it. The A5X should be able to break 30 fps as well, but we'll find out for sure in another day or so.

The offscreen results are even worse. Tegra 3 with DDR3-1600 is still only good for 11 fps. It shouldn't be any surprise, but we will need faster GPUs for better looking games. Egypt HD is definitely the new torture test for mobile SoCs. 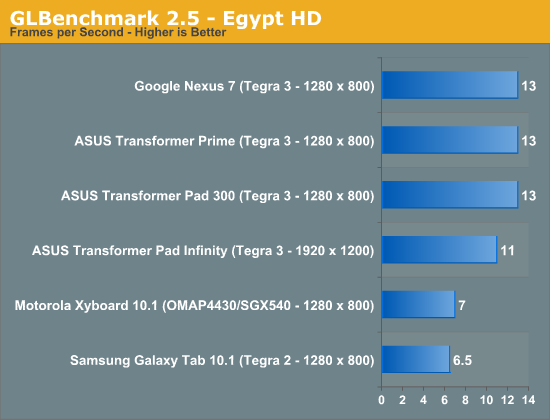 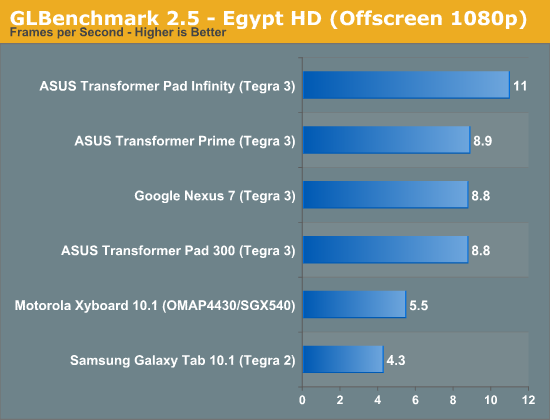 The Egypt Classic test ends up being Vsync limited on the 1280 x 800 Tegra 3 tablets, with even 1920 x 1200 running smoothly on the Transformer Pad Infinity. These numbers echo the reality of 3D gaming on Android today: pretty much everything runs well on Tegra 3.

The offscreen 1080p results paint a good picture for Tegra 3, which again can deliver average frame rates at or above 30 fps. Anything older than Tegra 3 however just can't pull it off. 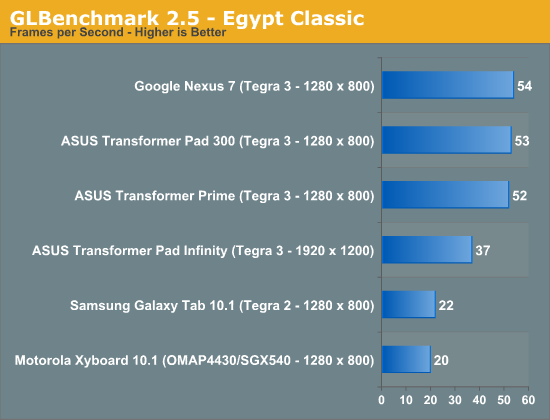 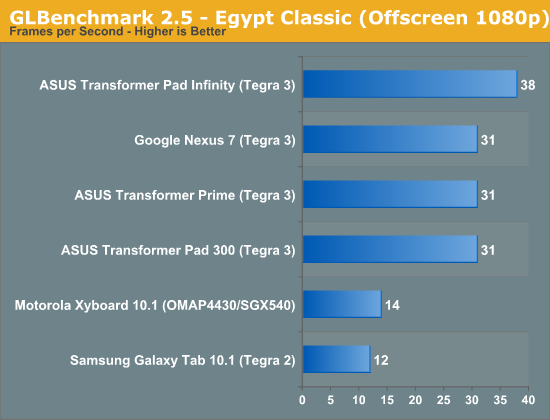