The Retina MacBook Pro can complete a full boot from power off to usable desktop in just over 17 seconds. It’s a hair faster than last year’s MacBook Airs, a bit quicker than the old SSD equipped MacBook Pro, and night and day compared to any Mac with a hard drive. Four years ago I said that Solid State Drives were the single biggest upgrade you could do for your computer, and it couldn’t be any more true today. 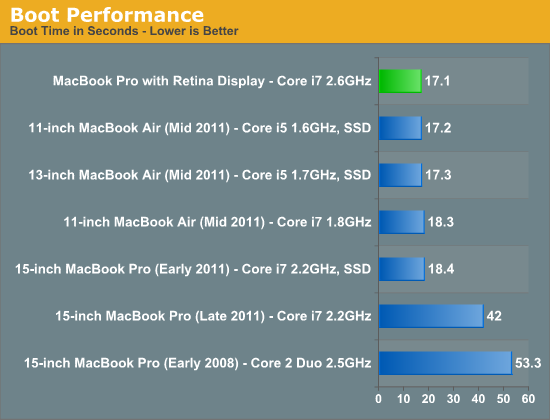 The Retina MBP behaves more like the 3rd gen MacBook Air in how it goes to sleep and wakes up. Both happen virtually instantaneously, and if your battery dies while asleep you don’t get the greyed out screen with progress bar as your environment is restored from disk - it just appears, taking a couple of seconds for the clock to update and everything else to come to life. It’s a small but subtle change that tells you the rMBP is in a distinctly different class. Apple’s tight control over firmware and storage interface help it deliver up to 30 days of standby power, a number I’ll really need to verify one of these days. 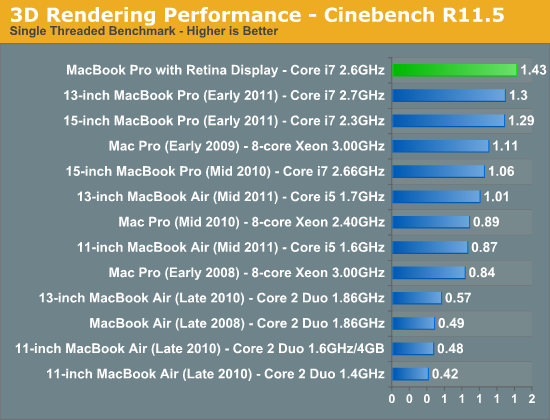 Raw CPU performance is up handsomely over the 2011 MacBook Pros, at least in their standard configurations. The 2.6GHz chip in the $2799 rMBP can turbo up to 3.6GHz when only a single core is active, delivering a 13% increase in performance over the previous generation 2.2GHz part. Compared to the upgraded 2.4GHz Sandy Bridge Core i7 from last year (not pictured) however, I would expect a sub-10% advantage. 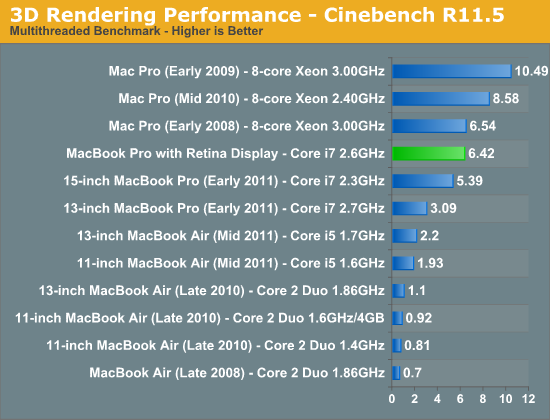 With all four cores active the 2.6GHz chip can run at up to 3.4GHz, which it regularly hits as long as the Kepler GPU stays asleep. The 2.2GHz Sandy Bridge based 2011s we’re comparing to on the other hand can only turbo up to 2.8GHz. Here the advantage is a more tangible 19%, although once again if you are comparing to one of the 2.4GHz parts from last year I would expect notably smaller gains (mid to high single digit percentages). The improved thermal characteristics may allow mobile Ivy Bridge to operate in turbo modes for longer than Sandy Bridge, however I don’t have any data to actually support that claim. That doesn’t mean it can’t happen, it’s just complex to test and model.

While the Cinebench tests are largely CPU bound, many of the following tests are largely influenced by the SSD in the Retina MacBook Pro. Here we see some huge gains, especially compared to older HDD based Macs. 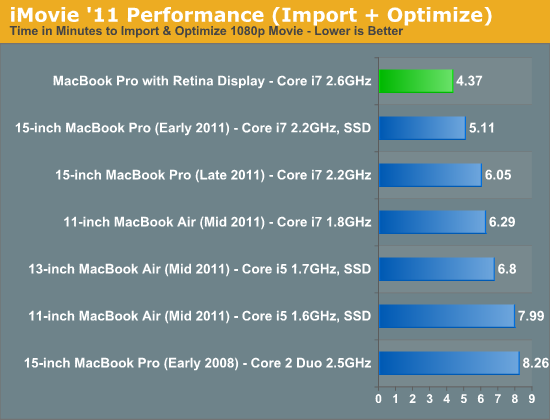 iMovie import time is heavily influenced by disk as well as CPU performance. As a result there are big improvements over both the HDD and SSD equipped 2011 MBPs. 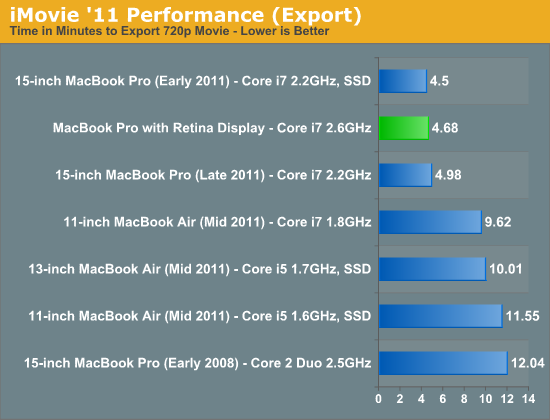 Export time is more heavily CPU bound and here the advantage over the previous generation notebooks is pretty much nonexistent. 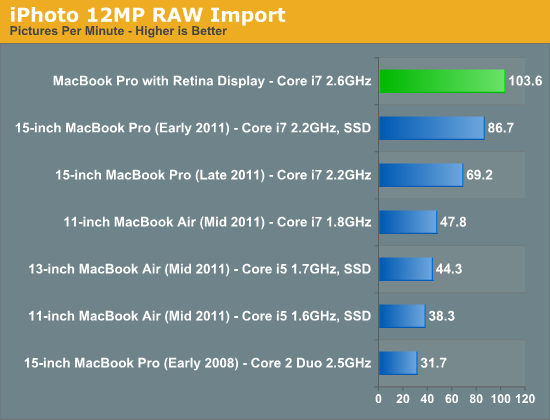 Our iPhoto import test stresses both disk and CPU, giving the rMBP a tangible advantage compared to the SSD equipped 2011 MBP. None of the dual-core or HDD based Macs stand a chance here. 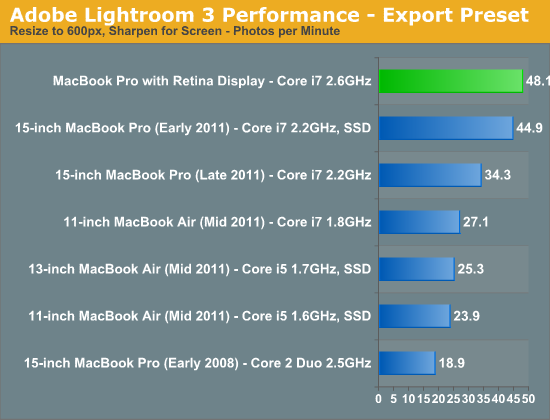 Our Lightroom test continues the storage/CPU dependencies as only the SSD equipped 2011 MBP is able to come close to the rMBP’s performance. There’s not much of a performance advantage here when you compare similarly equipped systems though. Ivy Bridge may have been a good upgrade from a power standpoint, but it doesn’t tell a significantly different performance story in all cases. 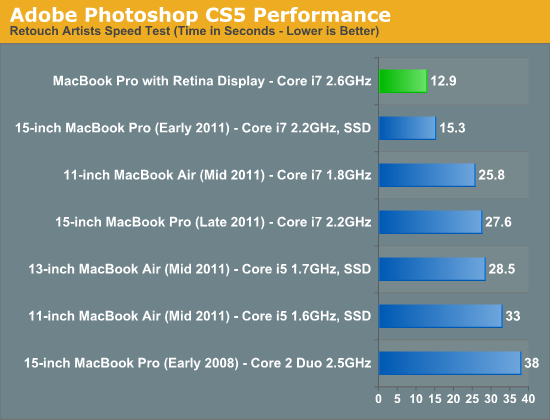 The rMBP cranks through our Photoshop workload fairly quickly. The performance advantages here are likely due to increased memory, a much faster SSD and obvious CPU speed improvements as well. 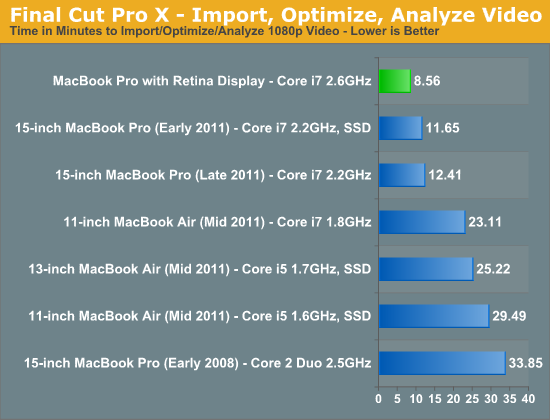 The same holds true for the advantages in our Final Cut Pro X test. As a default configuration the $2799 MacBook Pro with Retina Display is easily the fastest notebook Apple has ever shipped. It’s only if you had an upgraded 2011 model (perhaps with an aftermarket SSD?) that you’ll be unimpressed by the move.

I can’t stress enough how much the new SSD improves the overall experience. It’s just so much faster than what Apple used to ship.