Slimming Desktops Down: Intel Reveals Next Unit of Computing

Intel has demonstrated a new form factor at PAX East and Intel's Platinum Summit. The form factor carries the name Next Unit of Computing, or simply NUC, and measures in at 4" x 4" (or 10cm x 10cm for metric people). For comparison, mini-ITX is 17cm x 17cm so in terms of area NUC is 65% smaller. 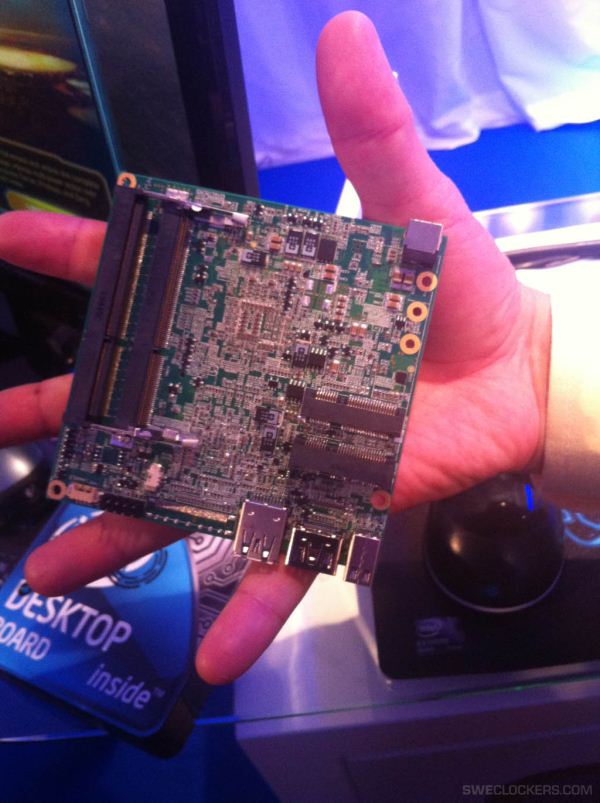 Intel's demo unit was based on Sandy Bridge, although the exact SKU is unknown. Given the size, it's most likely a ULV i3 or i5. In terms of other specifications, there are two SO-DIMM slots and two mini PCIe headers for WiFi for instance. Connectivity is fairly limited with one each for Thunderbolt, HDMI, and USB 3.0 ports, though especially Thunderbolt can support multiple devices using just one port.

There is one thing that goes unmentioned: Storage. Intel provided absolutely no info on what kind of storage NUC supports. In fact, it's not even sure if there is a SATA port since the photos that SweClockers posted are fairly restricting. The dimensions of a 2.5" drive are about 100mm x 70mm x 9.5mm, so fitting one inside a NUC might be a tight fit. An mSATA SSD would be more logical due to the space limits, but SSDs would of course increase the price and/or limit the capacity. It's good to keep in mind that Intel's unit is most likely a protoype showing the idea behind NUC and it's not necessarily a final design—plus OEMs can always do their own designs—so it's hard to speculate at this point.

As this is not a final product announcement, pricing is also unknown. Our rough estimation for a low-end model would be $200-300 since Core i3 CPU alone is at least $100 (though mobile i3s are OEM only so specific price is unknown). Without knowing the exact configuration, it's hard to say how much other components would add to the price but we should be looking at close to $100 with a decent amount of storage and RAM. Then add manufacturing and profits and a $299 price tag sounds somewhat realistic.

The constraints of NUC definitely shape its market niche. While it could be inexpensive, a real desktop can be had for about the same money but with more expandability. Intel claims that NUC is mainly aimed at digital signage and kiosks, and I can definitely see NUC being useful in such environments. NUC could also be a good low-end HTPC if it's configured properly but I can't see much other use for it in a home environment, as a tower desktop is better in almost every aspect other than size.

It seems that NUC is Intel's attempt at bringing the ultrabook idea to the desktop side, and while we have only seen a couple of pictures it's definitely an interesting concept. We have seen what small desktops can do nowadays by looking at Apple's Mac Mini and mini-ITX builds. Even low-end mobile CPUs are more than powerful enough for everyday use, so a full-size tower may not always be a necessity.

Intel is saying that first NUCs should appear in H2'12. It's unclear whether the first models will be Sandy Bridge based, but given that Ivy Bridge is socket and chipset compatible with Sandy Bridge it would seem the more useful processor. Hopefully we'll get some hands on time with NUC in the near future.