Like the Lumia 800, the Lumia 900 uses an AMOLED display instead of an LCD. One of the chief differentiators between the two models however is the difference in subpixel rendering. Whereas the Lumia 800 used a 3.7“ PenTile RGBG SAMOLED panel, the Lumia 900 uses a 4.3” SAMOLED+ panel with an RGB subpixel stripe. Those names fit, that is, if we’re following Samsung’s naming scheme, and as an aside this is undoubtedly a Samsung panel.

The effective resolution of both displays are 800x480 WVGA, like all Windows Phones, however. Jumping up in display size pretty much necessitates that change to RGB, since PenTile really only works when subpixels are below human visual acuity. In addition, we’ve already seen 4.3" SAMOLED+ WVGA displays out of Samsung (see the Focus S).

I measured the Lumia 900 display using an i1D2 just like I’ve done with numerous other smartphones, though at this point the advanced color and gamut information will have to wait until I make some targets. Again, because AMOLED is emissive, black color pixels are literally off, so contrast graphs are omitted. The Lumia 900 doesn’t go super bright, like other AMOLEDs I’ve seen. In fact, it’s slightly dimmer than the Lumia 800’s maximum of 196 nits. Remember that going to a larger display, especially AMOLED due to its emissive nature, increases power demands as r^2 since we’re talking about areal size.

Nokia was able to get the Lumia 900 display nice and close to 6500K, which is interesting considering how many other AMOLED displays I’ve seen which are up near 8000K or higher and noticeably blue all the time. 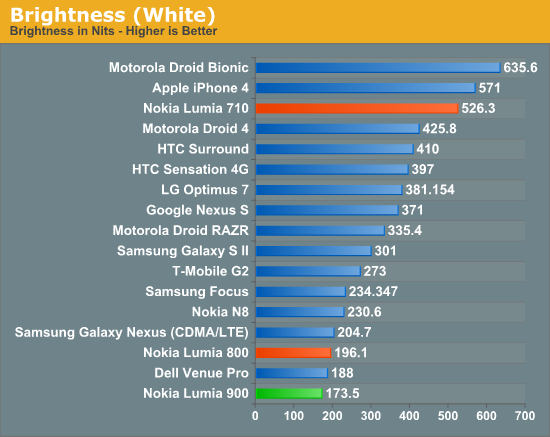 I glossed over ClearBlack on the previous Lumia reviews partly due to time constraints, partly due to not knowing the exact details of their optical path. That said, it was immediately obvious that the system used circular polarization’s behavior upon reflection to attenuate back reflections. However, since writing those reviews, Nokia has outlined their optical system in a conversations post, and the long and short of it is that the system consists of a linear polarizer and quarter-wave plate.

Incoming diffuse light gets vertically polarized by a surface polarizer, which becomes right hand circularly polarized when passing through the quarter wave plate. When circular polarized reflects off of a surface, it changes handedness - in this case from right to left handed circular. Upon passing through the quarter wave plate on its way out, this becomes horizontally polarized, which is then strongly attenuated by the surface polarizer with its fast axis aligned vertically on its way out, which acts like an analyzer. The end result is that outdoors the only reflection you’ll get is from the first surface, not the surface of the display itself, which does reduce resulting glare.

This change also permits the Lumia 900 to still look bright outside, and in turn allows Nokia to run the display at a lower brightness and save some amount of power. For a while I was waiting for some OEM to introduce a system using polarization to diminish back reflections, and Nokia has done it with ClearBlack.

Indoor viewing angles for the Lumia 900 are excellent as evidenced by the purple test pattern from WP Bench not changing color at extreme field angles. In addition, I subjectively can’t find any issues with the display - there are none of the other problems that affect the higher dot pitch AMOLEDs such as grain or mura. Outdoor viewing angles are likewise good for the Lumia 900 in part thanks to ClearBlack.