Camera quality has almost always been Nokia’s strongest suite, and the Lumia 900 isn’t an exception. The device builds on the Lumia 800 by including the same 8 MP rear facing camera module with 28mm effective focal length (in 35mm ‘units’), F/2.2 aperture, Carl Zeiss branding, and built around a 5 plastic element optical system. Like a number of other new Nokia phones, the Lumia 900 also includes a 4:3 and 16:9 option with unique horizontal field of views for both. Switch into the 16:9 mode and you get a wider field of view which uses the full horizontal extent of the sensor at 7 MP (resolution), or use 4:3 mode at 8 MP (resolution) and use the full height of the sensor. For example, I've uploaded a photo of the same scene taken in roughly the same position with both 7MP (16:9) and 8MP (4:3) for your perusal.

To tackle image quality, we've turned to our standard image testing suite which consists of photographs taken at five locations in our test bench (3-7), our lightbox tests with the lights on, and lights off, and photos of an ISO12233 chart, a GMB color checker card, and finally a distortion chart. I've also taken miscellaneous photos during my limited time with the Lumia 900 which I've put in a gallery below.

The Lumia 900 ends up performing very close to the 800 (unsurprisingly) and has great optical quality. In the distortion chart there's limited distortion, and in the test bench photos things end up nice and sharp pretty much everywhere. It goes without saying that obviously Nokia continues to have a dominant position in the smartphone camera space, even when it isn't building phones around the camera like with the N8 or PureVision 808.

Where the Lumia 900 does seem to struggle is white balance, as pretty much all the Lumias have weird color rendering in the lightbox test with lights on, creating a strange washed out cast. I would wager that this is more an outcome of the older ISP onboard MSM8x55/APQ8055 than anything else, and it's entirely possible that things will get better in later updates as Nokia continues to mess around with the sliders on Qualcomm's ISP. In addition, the preview image sometimes contains the colored center dot chromatic aberration we've seen on other phones, though the lens shading ISP does seem to fix it when you look at the actual captured images. As an aside, this is really another area where eventually moving to dual core SoCs will make a difference - the successors to 8x55 have better ISP.

Video quality on the Lumia 900 is very good. Video on the rear camera is encoded at 14 Mbps 1280x720 at 30 FPS in H.264 baseline with CABAC and 1 reference frame, as opposed to the CAVLC I’ve seen on a number of other devices. This is also a pretty high bitrate for 720p, and the result is subjectively very good quality. Note that none of the Windows Phones can record 1080p yet due to the devices all using single core Snapdragons whose encoder only can handle H.264 at 720p or below. Eventually we’ll see 1080p as Windows Phone adopts dual core SoCs with the rumored Apollo update which include 1080p encoders that will even encode high profile video. Audio on the rear camera is stereo AAC at 86 kbps with 48 kHz sampling, it’s good to see the Lumia 900 doing stereo audio using those two microphones onboard. 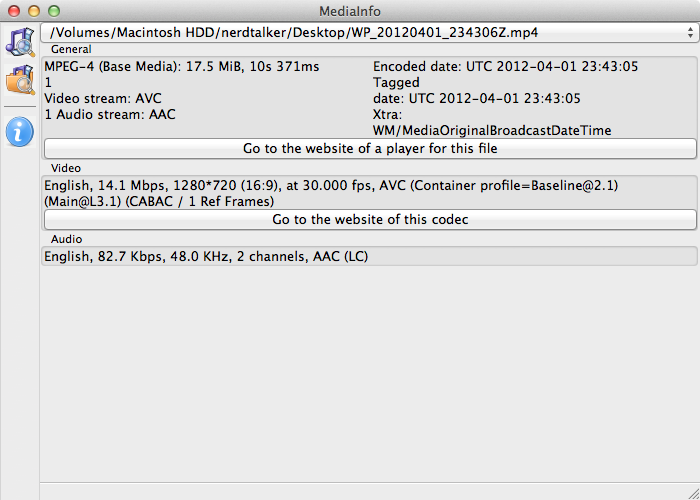 I’ve done the usual thing and uploaded samples straight from the device to YouTube, and made them available for download if you want to look at quality without YouTube’s transcode.

Again, the Lumia 900 video looks good even if it’s just 720p thanks to a generous bitrate, and inclusion of stereo audio is also a plus. Eventually Windows Phones will do 1080p30 video encodes, but that’s something which will come with even better SoCs.