In situations where a game is available in both the iOS app store as well as NVIDIA's Tegra Zone, NVIDIA generally delivers a comparable gaming experience to what you get on the iPad. In some cases you even get improved visual quality as well. The iPad's GPU performance advantage just isn't evident in those cases—likely because the bulk of iOS devices out there still use far weaker GPUs. That's effectively a software answer to a hardware challenge, but it's true.

NVIDIA isn't completely vindicated however. In Apple's corner you have Infinity Blade 2 and the upcoming Infinity Blade Dungeons, both of which appear to offer a significant visual advantage over the best of the best that's available on Android today. There are obvious business complexities that are the cause of this today, but if you want to play those games you need to buy an iPad.

The final point is this: Tegra 3 can deliver a good gaming experience on Android, we've already demonstrated that. But as a GPU company NVIDIA should know that it isn't about delivering the minimum acceptable experience, but rather pushing the industry forward. Just last week NVIDIA launched a $500 GPU that is overkill for the vast majority of users. But NVIDIA built the GeForce GTX 680 to move the industry forward, and it's a shame that it hasn't done so in the mobile SoC space thus far.

With Honeycomb and subsequent versions of Android, Google baked in wired and wireless controller support into the OS. NVIDIA worked with game developers to ensure proper support for these controllers made it into their games and as a result there are a number of titles available through Tegra Zone that offer support for external gamepads. Logitech's Wireless Gamepad F710 comes with a USB nano receiver that can be plugged into the Transformer Prime's dock. It's using this controller that I played Shadowgun, GTA 3 and Riptide. Out of the three, the ability to use a gamepad made GTA 3 much more enjoyable (and it made me much better at the game as well). 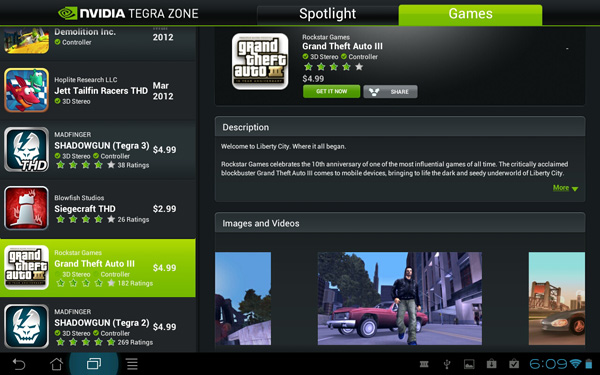 Although many casual Android/iOS games do just fine with touch, some are certainly better suited for some sort of a controller. While controller support in Android in its infancy at best, it's more than iOS currently offers. I know of an internal Apple project to bring a physical controller to market, but whether or not it will ever see the light of day remains to be seen. As smartphones and tablets come close to equalling the performance of current game consoles, I feel like the controller problem must be addressed.

There's also the chance that physical controls will lose out entirely with these devices. A friend of mine in the game industry once said that we are too quick to forget how superior input devices don't always win. The keyboard + mouse is a much more precise setup for a first person shooter, but much FPS development these days is targeted at gamepads instead. The same could eventually be true for touch based devices, but it's too early to tell. Until then I'm hoping we see continued controller support in Android and hopefully that'll put some pressure on Apple to do the same. It is an important consideration for the future of gaming on these platforms.