On April 27, 2000, AMD officially announced the name of their upcoming low-end processor based on a derivative of the Athlon core.  The AMD Duron, as it will be sold as, will feature what we've all come to know as the Spitfire core.

The Duron will be packaged as a 426-pin Socket-A part and will feature clock speeds comparable to that of Intel's new Celeron, currently residing in the 533 – 600MHz range, though it is expected to hit 667MHz by June or July.  The new Celeron will be the Duron's true competitor and you can expect to see the Duron priced competitively against Intel's Celeron on a clock for clock basis.

Fortunately, the Duron won't be as crippled as the new Celeron, since it will feature the same 100MHz DDR EV6 Bus (effectively 200MHz) that brought the Athlon so much attention upon its release.  As we proved in our review of Intel's new Celeron, its 66MHz FSB and 66MHz memory bus is definitely holding back the performance of the CPU, and unless overclocked, this will give the Duron an easy performance advantage over the Celeron.

The Duron will feature the same 128KB L1 cache from the Athlon in addition to a full speed on-die L2 cache.  While AMD isn't ready to disclose exactly how large that L2 cache is, they are willing to say that the Duron will feature more total on-die cache (L1 + L2) than the Celeron (which features 32KB L1 + 128KB L2).  At the same time, the Duron will obviously have less L2 cache than the upcoming Thunderbird part (256KB), so you can safely guess as to what the actual cache size of the Duron will be.

The reason AMD is being so secretive about the L2 cache size of the Duron is because they want to be able to explain exactly why they chose that particular L2 cache size for the processor without having people draw their own conclusions without any factual basis for it. 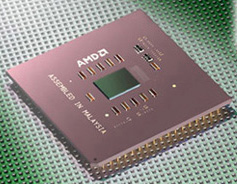 Given that the performance of the Duron is very close to that of the present day Athlon, if you look at a graph (above) comparing an Athlon 600 to a Celeron 600, you can easily see how the Duron will have no problem dominating Intel's Celeron.  The remaining question is what happens when you overclock the Celeron to 850MHz or beyond; only then will the Duron have problems keeping up because it currently takes an Athlon 800 or an 850 to match or beat the performance of a Celeron overclocked to 850MHz on a BX board.