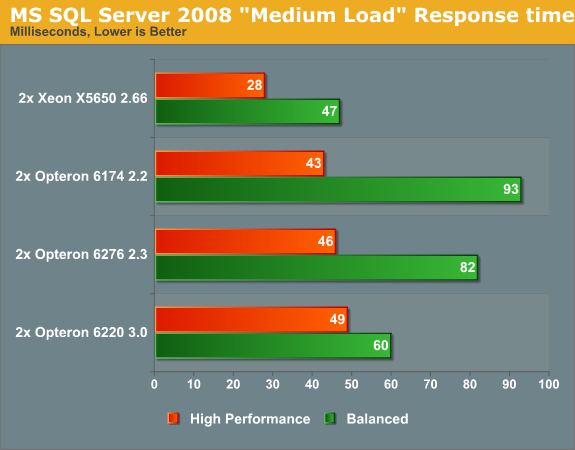 Here the response times are very interesting. From the "full load" numbers, you might conclude that the Opteron 6220 is untenable, as it delivers 30-40% lower throughput while consuming just as much power as the other servers. From those same numbers, we would conclude that the Opteron 6174 is the server platform to get. Switch to a moderate load and our conclusions change.

When testing at medium load, we get a much more accurate and nuanced picture as your servers will probably be spending a lot of time running this kind of load. It seems that if you want to save some power (e.g. run the "Balanced" power profile), the opteron 6220 comes close to the new champion, the Xeon X5650. Since turbo is not enabled in this mode, the 6220 leverages its higher clockspeed to outperform the other Opterons.

Interestingly, the Dynamic Voltage Frequency and Voltage Scaling (DVFS) of the Opteron 6174 performs pretty badly compared to the Xeon and the new Opteron. Enabling DVFS increases the response times by 116% (!) on the older Opteron. The Xeon and Opteron 6276 also get a significant—but lower—hit in response time: +66% and +78% respectively.

The Opteron 6220 suffers much less from this problem, as response times only grow 22%. That clearly indicates that the new Opteron deals much better with DVFS. The reason why the 6276 gets such a high penalty in "Balanced" mode is probably due to the fact that it cannot boost to 2.6GHz or 3.2GHz anymore. A better adapted power policy could definitely improve performance at lower loads. We measured the impact of turbo on the power consumption and it was less than 10%. The energy (power * time) increase was even lower (a few %) as the CPU could put the cores to sleep more quickly.

If you think these kind of response times (<100 ms) don't matter, don't forget that the top 5% queries can easily show 20-50x higher response times. Those are exactly the queries the users might start to complain about.

Let us look at the power figures. 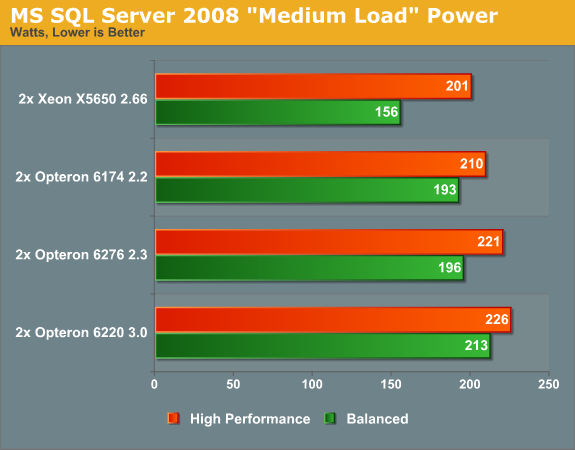 As the Xeon is able to put its cores to sleep more quickly and deeply, the Xeon is a real winner in "Balanced" mode. But notice how the Opteron 6174 performance/watt is no longer attractive: it needs just as much power as Opteron 6276 in balanced mode but delivers worse response times. Meanwhile, the Opteron 6220 fails to impress; it did deliver very decent response times, but it needs 26% more power than the Xeon, which is saving a significant amount of power in "Balanced" mode.